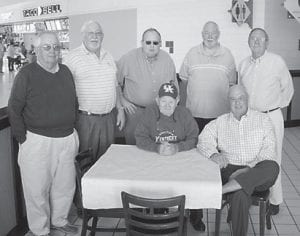 Jack Taylor became band director at Whitesburg High School in 1953. This continues his story, which began last week in The Mountain Eagle.

One of the most signifi- cant honors to the band came in the 1954-55 school year when the Whitesburg High School band was invited to perform in Lexington along with several other bands from throughout Kentucky. One of the band members, Eloise Reynolds Delzer, recalled this event recently as one of the highlights of her high school experiences.

“We were invited to a veterans event and parade in downtown Lexington where we performed our signature marching routine ‘The Brass Band Boogie’ in front of the old Lafayette Hotel with many veterans from our local VFW on the sidewalks cheering us on. The trophy was presented by the commandant of Fort Knox in front of the old Fayette Courthouse. The competition included Lexington Lafayette High School and the Louisville Male Band that day, just to mention a couple of bands we never thought we could compete with. We scared ourselves by competing with what we thought were the great powerhouse bands of the Bluegrass. 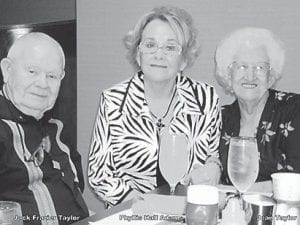 “I will always remember that as we were about to exit the bus for line up for the parade, Mr. Taylor stood with his hand on the handle of the school bus door and looked back at the group. He said, ‘You are as good as your competition, but you will have to give it your best to win. Big school bands put their pants on the same way you do, one leg at a time.’

“We could hardly believe it when they announced Whitesburg High School as the winner. Up to that point we had no idea how good we were or what our competition would be. Jack Taylor knew and he prepared us well. That day we all learned a valuable lesson without knowing it. We learned once you find out what it takes to win, make the effort and experience the satisfaction of succeeding those same principles can be applied to every undertaking in life.

“The concert band was not forgotten during those years. One of the more memorable concert pieces we played was entitled ‘In a Persian Market’, very exotic music for mountain kids and so much fun to play. When the parts all came together and we could hear and feel the sensation of everyone playing their part together perfectly. It was a wonderful experience even for those of us who would never play in an orchestra or college band after high school. There again, that opportunity and experience taught us how working together and mastering the music could produce a personally satisfying result leaving us with an appreciation for music that would enrich us for the rest of our lives. Many of our class were members of the All Festival Band. It was a great honor for our best to play with the best high school musicians from all over the state.”

Meanwhile, Jack Taylor continued to gain college credits toward a degree that would allow him to continue teaching in a qualification environment that became more restrictive each year. In the summer of 1955, Jack was attending an early summer session at UK where he could earn six credit hours toward his degree. Once again, looking at the bulletin board at the UK College of Music, he saw an advertisement for a band director at Whitesburg High School.

Being the impulsive type personality that he was, Jack was deeply offended by the thought that he would be replaced without prior knowledge. Another advertisement on the bulletin board was for a band director at Georgetown’s Garth High School. Jack’s first thought that he could finally get his college degree while teaching at Georgetown. And, being offended that nothing had been said to him at Whitesburg, he took the Georgetown job and called to notify WHS that he was resigning.

It was only when he returned to Whitesburg that he found the facts of the matter. The state laws required that any teaching position being filled by a non-degreed teacher had to be advertised each year and there was no intention for Jack to be terminated at Whitesburg. It had been a legal formality that the position was posted. But, it was too late as Jack had accepted the other job.

He taught in Georgetown the next year, played in the Georgetown College band and also in the UK Brass Band conducted by Warren Lutz, the UK “Marching 100” director. After a year in Georgetown, Jack returned to Whitesburg in 1957-58, but many of those whom he had so influenced had gone on to college, some of whom pursued successful careers as professional musicians.

Jack Taylor’s efforts in Whitesburg did not go unnoticed by school and community leaders in other communities. After these very successful years at WHS, Jack Taylor was enticed to Pikeville to build a band program in that community, which had been devastated by floods that year. He spent several successful years in Pike County before moving to Winter Park, Fla., as band director. Ironically, Hugh Adams lived in the same Orlando area in his retirement years.

Jack Taylor influenced the lives of many young people during his time as WHS band director. Some went on the musical careers of their own while others simply cherish the memories of a tough and rigid master musician who wanted them to be the best that they could be, even in Whitesburg High School!

Jack Taylor is now retired and lives in Winter Park, Fla., with his wife, Jean. After retirement, he spent some years as a volunteer with the Orange County Sheriff ’s Department. Jack often returns to Letcher County and attends most every five-year all classes reunion and particularly those related to his Whitesburg years of 1953-1955. He has often described those first two years at Whitesburg High School and his relationship with the community and his band members as being the highlight of his professional career. And, these were also great years and experience for those students who had the opportunity for training with Jack Taylor.

Jack recently said, “ I came to Whitesburg even though I had never lived there. My short tenure there matured me as a person, a band director and gave me an appreciation for the students at WHS and the people of Letcher County that cannot be described in words. I did the best that I could. They did even more for me. I made more lifetime friends from my students and the people of Letcher County than anyone could ever imagine. And, I love every one of them. These were some of the greatest times of my life.”

<b>In 1954, Jack Taylor organized a “stage band” or “WHS Orchestra” as an adjunct to his successful Whitesburg High School band program. This group played at several school functions or as a part of the concert band at the school. Its first performance included 14 of the WHS band members and was part of an April 1, 1954 band concert at the Alene Theatre in Whitesburg.

However, church influences and school restrictions at the time prohibited or restricted off campus performance using the school name or facilities. This included dances and particularly nightclub performances. As a result, the Jack Taylor Orchestra or “dance band”, independent of the school or the WHS “stage band”, was born.

Jack Taylor’s Orchestra included some of the older high school students although a few alumni as well as talented musicians from other areas or back from college sat in front time to time. Although Jack had almost no orchestra experience at the time of his arrival in Whitesburg, he taught himself and others the difference in playing marching band music and dance music. Jack Taylor led the orchestra and was lead trumpet player. Like his students, he was also maturing as a musician, although he was years ahead.

Local Whitesburg musicians piano player Lowell Williams and ‘Chuck’ Reed (the “Mad Englishman” from WTCW) were sometimes part of the band. Ralph ‘Hook’ Day played the bass and guitar at times. Jack Horner from Jenkins was an excellent alto sax player who sat in with the band from time to time.

The Jack Taylor Orchestra played mostly for dances at area nightclubs and high school proms. The Orchestra played at nightclubs including the local VFW in Whitesburg, the VFW and Colonial Club in Hazard, Jenkins Country Club, Copper Kettle in Norton, Va., and other places. Proms were played at many of the area high schools including Pikeville, Elkhorn City, Wheelwright, Jenkins, Cumberland, Dilce Combs, Prestonsburg, Paintsville, Hazard and others.

Crowd song favorites in those days included Jack Taylor playing Perez Prado’s “Cherry Pink and Apple Blossom White”, “Pennsylvania 6-5000”, “In The Mood”, “Sugar Blues”, “ When The Saints Go Marching In”, “Canadian Sunset”, “I’m In the Mood For Love”, “Stardust”, “Harlem Nocturne”, “Moonlight Serenade”, and the last song of every performance, “Goodnight Sweetheart”. Glenn Miller, Duke Ellington, Benny Goodman and other big band musician tunes were the crowd favorites and most were in the repertoire of Jack Taylor’s orchestra. And, the burgeoning rock & roll songs were popular with the younger dancers.

When Jack Taylor left Whitesburg and most of the 1954-55 band members had graduated high school and the area, the orchestra took a year’s sabbatical although Jack Taylor and Gail Potter continued to play in bands around Lexington. When Jack returned to Whitesburg, he revived the Jack Taylor Orchestra and some of his previous band members, who were then a couple of years older, joined him, including Jimmy Collins and others. In fact, when Jack moved to Pikeville, Jimmy Collins transferred to Pikeville and continued to play with Jack in the Pikeville High School band as well as his dance band.

During all of those years, on occasion, music professional such as Ed Minor, then band director at Harlan and a former piano player and arranger for The Hilltoppers, a famous and successful recording group from Western Kentucky University, and Johnny Coppinger, a band director at Cumberland High School, would join the group.

Jack Taylor, Ed Minor, Johnny Doyle and others continued to play in the area even after Jack’s leaving Whitesburg for Pikeville. The continuing influence of Jack Taylor is shown in the 1957 Black Kat applauding the Jack Taylor Quintet : “ Mardi Gras Fun — The most wonderful thing of all was the orchestra! The Jack Taylor Quintet, which was composed of five members, Ed Minor on the piano, and also a very fine vocalist, Gene Mitchell on bass, Doc Williams on drums, George Luke on the saxophone, and our own Jack Taylor on the trumpet. The junior class really put a lot of work and, as Mr. Preston put it, a lot of cold cash into the Mardi Gras and on behalf of the senior class I would like to say, Thanks, juniors, for a fine evening of fun and recreation. The seniors are really feeling like seniors now!”

For those who experienced those years and occasions, this was the golden era of music in Whitesburg. These are great memories of some interesting people and times.