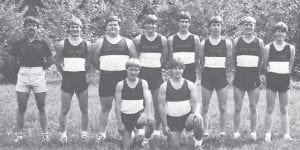 The homecoming activities began on Oc. 26, 1984. At 5:30 the parade was held in downtown Whitesburg. At 6 p.m. the coronation was held at the football field. At 7:30 the football game began with WHS playing Johns Creek. 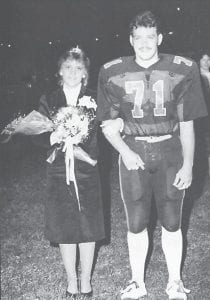 Tammy Boggs, a Whitesburg High School state secretary for Kentucky VICA, is the first person from Letcher County to be elected to a state VICA office. Tammy recently traveled to Frankfort, Kentucky, Oct. 8-14, to prepare for and conduct the VICA State Leadership Training Conference. Tammy did an outstanding job at this conference and made her fellow members attending the conference from the Letcher County Area Vocational Education Center proud of the businesslike and courteous way she conducted herself. 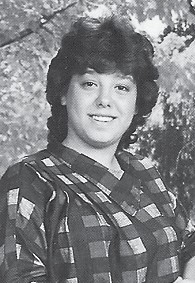 <b>This year three new members have been added to the WHS staff.

Mr. Matney formerly taught as a homebound teacher for 8 years. He enjoys teaching in the classroom and is interested in the students’ progress.

Mrs. Dorothy Kennedy has taught in Texas and South Carolina but loves the Kentucky mountains. She is working in coordination with Mrs. Ison.

Mr. David Boggs, alumni of Whitesburg, has been hired to coach the baseball team and teach World Civilization.

This was a rebuilding season and a team with very little depth. Our strong points were pride and a willingness to give an all out effort. We started slowly and finished the season as EKMC runners-up. Kevin Boggs and Harrison Thomas were selected as All-EKMC and as Honorable Mention All-State. Seniors Tim Fugate and Kevin Boggs deserve a lot of credit for our success this season. Coach Eddie Holbrook.

The Beta Club plans to be very active again this year. The first event scheduled is a fund-raising car wash on Oct. 11 at Long John Silver’s. The car wash will be open from 10 a.m. to 4 p.m.

The big event will be the Beta Convention. The convention will be held during the weekend of Dec. 7-9 at the Galt House in Louisville.

Summer vacation is something that almost everyone looks forward to. Well, as disappointing as it may seem, summer vacation is over for the year of 1984, and it’s time to settle down and begin a new school year. This is not to say that the enjoyment of vacation is out of sight and out of mind. By reading the following comments from the students and teachers at WHS you will see that their vacations are definitely not out of mind.

Mickey Sexton started sleeping without my nightlight “cause I ain’t afraid of no ghost.” Greg Polly went to basketball camp and ran around. Stephen Holbrook went to western Kentucky for football camp and just practiced football. Tracy Frazier said, “I was nasty!” Cyndee Wilson went to Gatlinburg, and also spent a lot of time with Rod. Mrs. Thomas rested, relaxed, and prepared for the new school year. Billy Hall painted the JROTC building and went to football camp. Mrs. Barker went to Daytona Beach, Fla., cleaned house and worked in the garden. Lisa Pigman went to Chicago and worked at Kentucky Fried Chicken. Carmella Webb went to Myrtle Beach and helped plan her sister’s wedding. Monika Venters went to Europe and Tennessee had a good time. Miss Whitaker went on a few short trips and read, nothing really spectacular. Leslie Frazier skied down Mt. Everest, swam to China, and robbed the richest bank in the world. Carlos Standifer went to Kings Island and got lost. He had to ask a man dressed as Barney Rubble where the lost and found was. Alisa McCall said, “I had the pleasure of sitting outside the hotel in Texas in my gown at 3:30 a.m. because of a fire alarm.” Mrs. Banks said, “I went to Pigeon Forge and had a great time. I also went to Lexington and spent all of my money.” Mrs. Day went to Georgia, stayed at the lake, and baby-sat with grandchildren and just had a real good time! Tina Howard went to Virginia Beach and spent time with James Brock Jr. Benita Stanley went to Myrtle Beach and Texas and met a lot of new people in Virginia. Cheryl Mullins participated in the Governor’s Scholar’s Program. Jeanne Crain ran around and got married to Chris Creech, and also was a counselor at 4-H Camp.

The Letcher County JROTC began its second year with very high hopes. There are 166 cadets enrolled in the Letcher County program, 88 of them being at Whitesburg. The program is taught by Sgt. Enoch Sturgill and SFC Lee Hodge, a new instructor for Letcher and Fleming- Neon high schools.

The program has started off with a busy schedule. A car wash and bake sale was held to raise money to build a sign for the Whitesburg High School. Also, the Battalion Color Guard has performed at most home football games and the Gingerbread Festival.

Last Saturday, the JROTC participated in the Mountain Heritage Parade. Although the day began with clouds and overcast skies, the spirits of the cadets were not dampened. The cadets showed their discipline, dedication, and perseverance throughout the parade route. This paid off as the JROTC was awarded the first-place trophy in the marching division.

We all hope the rest of the year is as successful as the past few weeks have been.

The annual senior magazine drive began on August 21 and ended on September 19. Each year, seniors sell magazines to raise funds for their senior trip.

There were 111 seniors who participated, but only 41 raised the quota of 12 or more orders.