The 1980 Jacket Sluggers were the champions of the East Kentucky Mountain Conference.

Friday night ended the Jenkins Invitational Tournament. The final game was between the Whitesburg Lady Jackets and the Neon Lady Pirates.

There were 13 free throws made out of an attempted 18, making 72 percent, which is a very big improvement from the first two games.

The Pirates stayed ahead during the entire game, but it wasn’t by a very big margin like some people expected. The final score for the game was Whitesburg 41 and Neon 58. Even though the Lady Jackets didn’t win, they played very good game.

The Lady Yellowjackets played their opening game for the season on Monday, Nov. 12, against Jackson. The game was indeed a victory for the Jackets, with the final score being 82-18. The starting line-up for the Lady Yellowjackets was Ramona Combs, Lynn Perry, and Wanda Howard (seniors), Nancy Huff (junior), and Judy Mason (sophomore). The top scorer for the game was Nancy Huff with 19 points. Second was Lynn Perry with 16 contributed to the game. Third was Wanda Howard with 12 points and fourth was Ramona Combs with 8 points. The rest of the scoring is as follows: Theresa Sexton with 7 points; Cynthia Branham, Tammy Thomas, Tiphanie Bates, and Terri Adams, each with 4 points; Martha Wynn and Julie Boggs, each with 2 points. 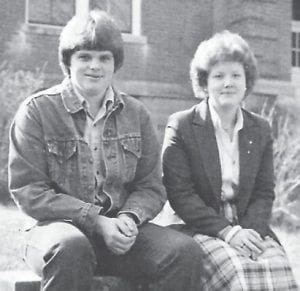 Van Stanley Breeding and Melissa Michelle Mohn were covaledictorians of the Whitesburg High School Class of 1980.

Van Stanley Breeding and Melissa Michelle Mohn were honored as co-valedictorians of the 1980 Graduating Class of Whitesburg High School at the commencement exercises held on Friday, May 23, at the Whitesburg High gymnasium. Each of these students had a perfect academic standing of 4.0 based upon four years’ work. 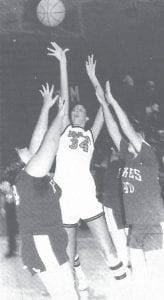 Lynn Perry penetrated the Pirate defense, but to no avail as the Jackets went down to defeat at the hands of the Fleming- Neon Pirates.

Missy is the granddaughter of Mr. and Mrs. James O. Mohn. She belongs to the Beta Club, Science Club, Black Kat Staff and is the editor of the yearbook. Missy is planning to attend Centre College in the fall.

Van is the son of Mr. and Mrs. Van Breeding. He belongs to the Beta Club and Math Club. Van is the past master councilor of the Pine Mountain Chapter, Order of Demolay. He is planning to study medicine at the Uni- versity of Kentucky.

Part II of the senior class will

Missy Mohn and Monica Adams will their bus seats to anyone on next year’s senior class trip to Washington; Carol Shepherd wills her ability to drive a standard car to Mary Smith; Bobby Roe wills his ability to work difficult math problems with a calculator to Mary Smith; Lynn Perry wills a small portion of her height to Paula Warzon; Willis King wills his seat to whoever can get evil with Mr. Henrikson; Regina Combs wills her place on the annual staff to Sarah Frazier; Dianna Gilliam wills her #10 shoe size to Robin Roberts; Tom Dollarhide wills his red beard to Doug Raleigh; Shade Frazier III wills his blue sleeveless vest to Mr. R.T. Holbrook; Marshall Ison wills his parking spot to Andre; Patty Meade wills her ability to make it through Science Club to Greg Hogg; Shelia Page wills her ability to stay out of the office to Sherry Page; Carol Webb wills her ability to stay quiet in class to Anita Niece; Donnie Fields wills his seat and red greasing pen in Mr. Welch’s annual staff to anyone who has patience and doesn’t have a class that period; Tracie Estep wills her ability to go one whole year without skipping to Mary Smith and Lisa Bentley; Nancy Brown wills her driving ability to Greg Hogg; Mike Shepherd wills his video and cassette recorder equipment to anyone dumb enough to take it; Luann Vermillion wills her ability to always be late to Mrs. Lewis’s future homerooms; Pam Webb wills her crooked back handspring to Teresa Davis; Tammy Garrett wills Thunder to Cynthia Fugate; Bill Sparks wills his hangovers to John D. Huff; Coy Sexton wills his good looks to Joe Banks; Jeff Polly wills his reserved parking lot at the “6” to Mike Baker; Larry Owens wills his motorcycle to Joe Banks; Tammy Niece wills her “wacky weed” to Mr. Welch and his junior D.E. Class that they may have the ability to talk as much as she does; James York wills his place at the circle to Chris Combs; Danny Ingram and Ralph Hall will their sure hands to any junior boy who has the need; Brenda Trent wills her ability to make good grades to Angel Cummings; Helen York wills her seat in chorus to Rhea Collins.

Our record of 13 wins and 16 losses does not accurately reflect our total baseball program. This was a very young squad, which became a pretty good team during the second half of the season after some rough sailing early in the schedule.

Here it is once again time for Kat Tales to sweep you into a world filled with news events about WHS. So get ready to feast your eyes upon a few exciting and entertaining paragraphs about anything and everything you want to know!

The boys’ basketball team will play its first game on Nov. 23 against Owsley County.

The heating facilities for the science building are located in the dilapidated high school building. Due to the closing of the high school building, the science building is being heated by coal stoves. This brings to one’s mind the days when this was the only source of heat for many schools and businesses. But when wrapped in the warmth produced by the heaters, no one seems to notice or care that this system is almost extinct in today’s public building.