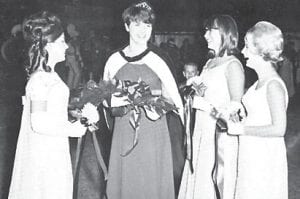 The candidates for the 1969 WHS homecoming queen were announced by Mr. J.M. Burkich, Principal, on Wednesday, October 8. Representing the senior class will be Jenny Bowen; junior candidate is Leanna Short; sophomore representative is Sue Franklin; and the freshman elective is Becky Trent.

The queen was chosen from these four candidates and announced at the pre-game ceremony, Friday night, October 17, at the Whitesburg Athletic Field. The new queen was crowned by Karen Kincer, the 1968 homecoming queen, who is now attending Morehead State University.

Jenny Bowen, the senior candidate was chosen by popular vote to reign as homecoming queen for the 1969-70 school year.

Mr. U. G. Horn began his first year as WHS’s assistant principal on August 25, 1969, replacing Warren Combs, who left to take a position in Ohio. 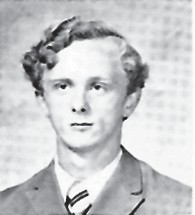 Mr. Horn was formerly our head basketball coach for three years. Previous to this he was assistant coach under Gobel Ritter. He has served our school willingly and diligently and shown his admiration through years of devotion. We, the staff of the Black Kat and members of the student body, welcome him as our assistant principal and will give him our continuing support.

On August 22, 1969 the “Good News” Folk Musical was presented at the First Baptist Church in Whitesburg.

It was started by Leon Miller of the Mennonite Central Committee, who was also the director, and the Rev. Mr. Leon Wesley, minister of the Methodist Church, who wanted to provide recreation for the young people.

The musical was performed by local school and college students. Throughout the summer, these students met for practice and several parties. The students also had hayrides, wiener roasts, and swimming parties . 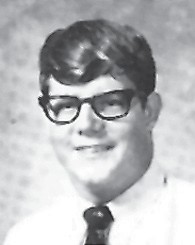 September 25, Mr. Horn, assistant principal, made an unscheduled talk at the pep rally. The cheerleaders were in position to do a yell, while the student body screamed and yelled at each other.

The cheerleaders waited for a short time for the students to stop talking, but to no avail. Mr. Horn walked onto the floor. He said that he knew it would be difficult, since we had lost several ballgames, but the students should support the team. He said the cheerleaders and the team represented our school and that we should try to encourage spirit for it. We hope the students take his message to heart. 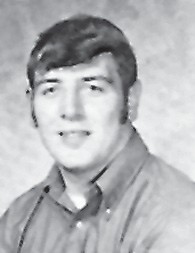 Coach Gose is a graduate of WHS and Morehead State. He lettered four years in football at Morehead. He has been an assistant coach at Whitesburg and also at Paintsville. His assistants this year are Jerry Coots, Hiriam Wright and Darrell Bell. Gose is teaching health and physical education.

Coach Bell is a graduate of Wayne County High School in Monticello and graduated from Cumberland College in Williamsburg. Coach Bell will be assisted by Coots and Gose. He is teaching sociology and physical education.

Hiriam Wright, assistant football coach, joins the junior high at Whitesburg as a social studies teacher. We welcome these additions to “the hill.”

WHS class goes to court. Mr. Larry Ison’s American Government class is doing further work in field studies this year. On Oct. 8 they attended a session of the Letcher County Court. We are happy to see Mr. Ison’s classes watching democracy work and being actively involved.

’Coming Around The Mountain’ and the ‘One That Got Away’ were the two plays presented by the senior class at WHS. Practice began for the plays on March 23 in Room 22. The seniors present a play every year to make more money for the senior trip.

In ‘ The One That Got Away,’ the stars were: Sandra Banks, Judy Hogg, Yvonne Ott, Ronnie Biggerstaff , Herby Smith, Kaye Ward, Saundra Sexton, and Randall Banks. The plays were presented for the students on April 6, 1970 and the night performances were held on April 6 in the grade school auditorium.

A group of folksingers known as ‘ The Wheaton Kids’ appeared before the student body of Whitesburg High School, on April 1, 1970 in the grade school auditorium. The Wheaton Kids are from a church in Wheaton, Ill., which is nondenominational.

The purpose of the group is to try to spread the gospel through singing. The Wheaton Kids consist of approximately 30 high school and college students to spend their spring vacation in Letcher County.

The Wheaton Kids appeared in groups of approximately 11 students. Each of these groups performed in churches at Haymond, Isom, Blackey, and Sandlick, March 29-April 3, 1970.

Terry Coleman, the son of Mr. and Mrs. Walter Coleman of Partridge, received first place in the District and Regional High School Oratorical Contest sponsored by the American Legion Post 152, March 6, 1970, at the First Baptist Church of Whitesburg. Terry participated in both categories, prepared oration and the extemporaneous feature. Terry’s prepared oration was “The People’s Constitution — Ours to Defend”, and his extemporaneous speech was “Judicial Power.”

Terry went to Frankfort for the State High School Oratorical Contest March 22. Terry is a junior at WHS.

Two Whitesburg High football players were chosen as All- Conference performers at the annual meeting of coaches and athletic directors of member schools in the Eastern Kentucky Mountain Conference. The meeting was held on Dec. 8, in Hazard.

Eddie Newell is a 6-0, 220 pound junior at WHS. Newell was chosen as a firstteam defensive tackle. He was second to Gary Cornett as the Yellowjackets’ leading defensive player. He started at center as a sophomore and played offensive tackle and linebacker in addition to center. He is a sure handed tackler who really likes cracking heads. He is also a good strong blocker. Eddie is a member of the Science Club, “W” Club, and Hi-Y Club. His parents are Mr. and Mrs. Joe Newell of Whitesburg.

Danny York, chosen as first-team fullback, is a 6-1, 190 pound sophomore. York was the Jackets’ leading ground gainer with 865 yards in 143 carries. His best game this year came against Cawood when he piled up 181 yards in 17 attempts. He is a tremendously strong runner and an excellent college prospect. Danny is a member of the ‘W Club,’ and is the son of Mr. and Mrs. Elmo York of Cowan.

(The above articles are from the 1970 Black Kats and the Yellowjacket Yearbook.)