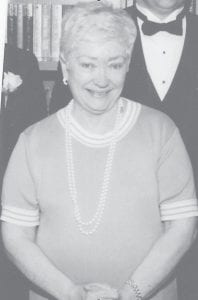 Ann was a member of the Whitesburg High School Band for four years, the Glee Club, three years, editor of the Black Kat her senior year, Science Club two years, the Wildlife Club for two years and a cheerleader one year.

During recent interviews of former WHS student musicians as well as Jack Taylor, a couple of names were often woven into the discussions. One was Ann Cox (now Ann Cox-Yates) of the WHS Class of 1955 and an accomplished musician in several fields.

Ann Cox grew up in the Thornton/Farraday community and attended school in Whitesburg grades 1-12. At age 5, her grandmother noticed that when music was playing on the phonograph or radio, Ann’s fingers and feet moved to the beat of the music, almost as if she were playing a piano. Her mother talked to Ruth Tolliver, one of the local piano teachers, who suggested that Ann have piano lessons even at her early age and that led to her parents buying a piano. For several years thereafter, her piano instructors were Ruth Tolliver and Rosa Jones and she was also given voice lessons. 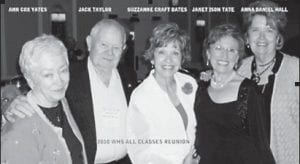 By the fourth grade, Hugh Adams, the grade and high school band director, had Ann in his grade school “Rhythm Band,” a teaching vehicle that Adams used to stimulate music interests in younger students who may not yet have been prepared for a full band experience. Since Ann Cox had three years of piano and voice training by that point, she was made a member of the Rhythm Band and also became the student-director of that group. She was assigned the soprano sax (the straight one) as her band instrument although she had to sit with the trumpet section to play from their music sheet, as there was no music for her instrument. (Ann obviously was a favorite of Hugh Adams as he also made her a junior majorette for his high school band even though she was only in the fourth grade.)

By the eighth grade, Ann Cox was still playing piano as well as being in the concert band and the marching band as a majorette. She learned to play a variety of instruments (as needed) during those years including bells, tympani, castanets and bassoon. In that year, she joined the high school chorus directed by Hugh Adams and Ruth Tolliver and later by Jackie Combs Owens. In high school, Ann accompanied the chorus on the piano.

Hugh Adams continued as band director until Ann’s junior year at WHS when he was retired and was replaced by Jack Taylor. “Both Hugh Adams and Jack Taylor had marching and concert bands, but not with the same emphasis. Mr. Adams was a longtime band director and veteran of bands in World War II and his emphasis was more on the concert band. I had the benefit of good solid music instruction for many years under the direction of Hugh Adams. When Jack Taylor came, the music itself was not only emphasized, but marching was a priority, so I had the benefit of both from excellent teachers,” Ann said recently.

Jack Taylor then started his well known dance band and asked Ann Cox to be the pianist. She recalled, “That was fun. And, then Jack’s band was asked to play out of town dates in the area. Since I was the only girl in his dance band at that time, Jack had to do some smooth talking to my mother to get her approval for me to travel with the group. I had to ride in his car and I am not sure how all the guys felt about even having a girl in the dance band originally. But, it turned out that all of the guys in the dance band went out of their way to protect me like I had never been protected before or since. They were all like the brothers I never had. The pianist had a great solo in the arrangement of ‘Back Beat Boogie’ and I can still play it. Even after graduation from WHS, when I came home from college Jack called to ask me to play with his group between Christmas and New Year, which I really enjoyed.”

After WHS, Ann Cox attended Montreat College in North Carolina and received a B.A. degree in music with a double major in piano and voice. Later, she went to Eastern Kentucky University for an MME degree in music. While at EKU, she was elected a vice president of the Kentucky Music Educators Association (KMEA). She taught school at Breathitt County High School for a couple of years where Millard Tolliver was principal before her first marriage and moving to Lexington. (Ann is very proud of the appearance of the WHS marching band at the inauguration of one Kentucky governor as well as singing for the reviewing stand from a float sponsored by Breathitt County at the inauguration of Governor Bert T. Combs.)

In Lexington, Ann continued her music interests by volunteering as a member of the Lexington Singers and the Collegium Musicum at UK. The Lexington Singers traveled to New York with the Cincinnati Symphony Orchestra to perform at Carnegie Hall, obviously a highlight in Ann’s music career. She acted and performed with the Studio Players in Lexington and performed with the Lexington Woman’s Club Follies, both as an actress and as the piano accompanist playing for rehearsals and then for performances with Dave Parry’s band. She sang in church choirs and was the organist/choir director at several Lexington area churches. And she played for several University of Kentucky graduation ceremonies.

When the New York City Opera Company performed in Lexington it used local performers to fill its roster for performances. Ann was chosen as a singer as well as a dancer and performed with the group at the Lexington Opera House as well as in Ashland.

In 1982, Ann remarried and moved to Louisville where she continued to play at two Louisville churches and sang with The Bach Society. She still plays for many weddings each year at the Louisville Presbyterian Seminary. Before the death of her husband, William Yates, they had the opportunity to travel to several parts of the world where Ann found a way to play some of the fine church organs in the world, which she considered to be a real honor and privilege.

“I can’t begin to tell anybody how much my music training under great teachers in Whitesburg meant to me all of my life. Hugh Adams was a master musician and had responsibility for all of the music programs at Whitesburg until Ruth Tolliver and Jackie Combs Owens came to help him. His musical experiences all over the world during the war gave him great knowledge and training. And, Jack Taylor was an influence over so many of us during his few years at WHS that will never be equaled in our minds. He is still a friend and loved by all of his former students to whom he meant so much,” Ann Cox said. “Those were wonderful years.”

Ann Cox-Yates is extremely complimentary of the new keyboard program in the Letcher County School system, an outgrowth of the Steinway piano contribution initiated and carried out by Whitesburg High School alumni, many of whom were fellow students of hers in the 1950s. “All of us should applaud the Letcher County Board of Education and the Superintendent for their foresight. It is well documented that a good piano program as well as other music programs for younger students stimulate their academic growth in many other areas. But, most importantly, these young people can continue to improve on their musical talents and enjoy them throughout their lives, even if they do not go on to play professionally. Music is fun and rewarding and I hope that every Letcher County parent will give their children the stimulus needed to develop whatever music talents their children might have,” she concluded.

Ann Cox-Yates lives in Louisville and works for the City of Louisville. She has three children and six grandchildren, and still keeps in touch with her many friends from WHS days.