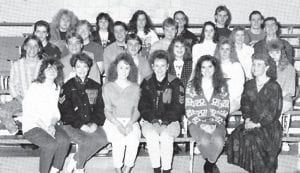 On April 27, 1990, the junior class of Whitesburg High School sponsored the junior-senior prom. This year the junior class chose “Hold on to the Night” as the prom theme. Blue and silver were chosen as the prom colors. At 10 p.m. the moment that everyone had awaited finally arrived — the crowning of the 1990 prom king and queen. This year, Danny Adams and Michelle Holbrook had the honor of being crowned. It was a special night for everyone, and it will always remain a special memory for all who attended. 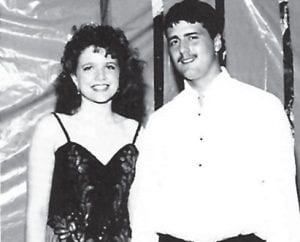 Congratulations go to these students and their advisor, Mrs. Kathy Napier.

On April 22, the world celebrated Earth Day. We are entering an age where all of society, not just scientists, is voicing their concern and protecting our environment. People are boycotting companies that package their products in non-biodegradable wrappings. Other companies are receiving pressure to end production of products that are aerosol and disintegrate the ozone layer.

Whitesburg High School did their part on May 8 and 9 when they landscaped around the high school. Teachers and students planted over 400 trees on campus. David Williams, principal of WHS, said the trees were included in the landscaping when the renovations of the school were planned. However, the trees were also the school’s contribution to Earth Day. 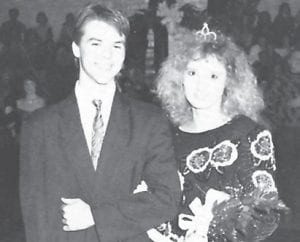 We hope that these trees will live for years creating oxygen and beautifying our community.

For the first time, Whitesburg High School has a boys’ and girls’ golf team. The members of the boy’s team are: Eric Polly, Jason Kincer, Michael Maggard, John Cornett, and John Slone. On Monday, May 14, the boys’ team won their first match against Allen Central. The members of the girl’s team are: Amy Mullins, Kim Gilbert, Stephanie Reedy, Leslie Bates, and Angie Larkey. We would like to wish both teams lots of luck in the coming year.

The 1989- 90 Student Council has already begun working to improve Whitesburg High School this year. New picnic tables have been made and are ready to be put to use, while many new landscaping deals have been put into consideration. 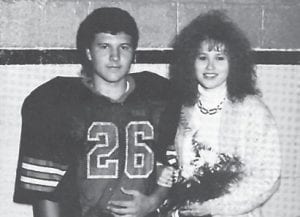 After everyone took his or her place on the floor, the 1989- 90 Basketball Homecoming Queen was announced: Kathy Sparks. Kathy is the daughter of Jack and Trina Sparks of Mayking. She is planning to attend Morehead State University in the fall. Her escort, John R. Sexton, is the son of Jack and Doris Sexton of Sexton’s Branch. He is also planning to attend Morehead this fall.

Homecoming in the rain On Sept. 15, 1989, a very rainy Friday evening, Whitesburg High School held its annual football homecoming. For the first time, the ceremonies were not held on the football field. Because of the mud on the field, the sidewalk in front of the bleachers was used instead.

As the Homecoming Court and their escorts were taking their places in line, a huge downpour began. All the umbrellas went up, and the spectators ran for cover as the smiles turned to looks of disgust. All dressed up and huddled under their umbrellas; the Court began to march onto the rain-soaked sidewalk.

As everyone was lined up along the sidewalk and smiling for the cameras, the 1989-90 Homecoming Queen was announced. Kathy Hogg received the crown. Despite the pouring rain, all girls kept smiles on their faces, and made another WHS Homecoming very memorable. Congratulations to Kathy and everyone else who had the honor of being chosen.

This year the Whitesburg High drama class did an outstanding job. For their winter performance, they performed the play “Our Town”. Jessie Richmond and Kathy Hogg had the key roles of George and Emily. Due to everyone’s hard work, the play was a success. Due to their growing popularity, the class decided to perform another play in the spring. This play had meaning, comedy, and excitement. It was about “home people” and “home problems,” and was called ‘Ancient Creek.’ It soon became a big success also. The class performed Ancient Creek 13 times, and every time more and more people fell in love with it. Due to their hard work, patience, time, loyalty, the class and a fantastic job, and everyone in the class should be applauded.