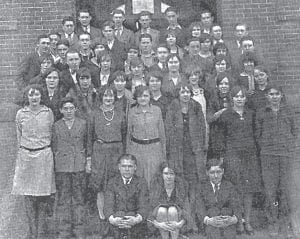 The sophomore class of 1928 is one of the outstanding classes in high school, not only are they large in number but they have taken a leading part in the activities of our school. Two of the numbers were on the girls’ basketball team, namely Ida Hart and Delilah Speaks, also two of the outstanding in the boys team come from the sophomore class, they are Henry Wright and Olan Cook. Their sponsor is Miss Cleary. 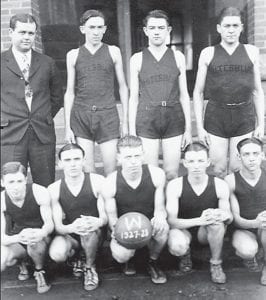 The end of the basketball season is in sight. Last week saw the biggest program of the season finished, when both boys and girls played Fleming Thursday night, the boys played Carr Friday night and both boys and girls met Hazard College Saturday night. Then on Tuesday night of the week, the girls met the Hazard High girls and the boys played the Fleming boys again. Out of seven encounters, our teams won three times, all at the expense of Fleming. 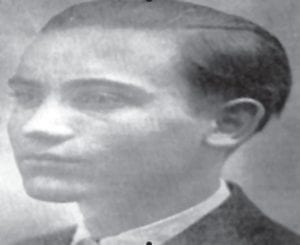 Fleming is hampered by the lack of a gym for practice, but the teams put up a game fight.

Coach Glenn started the Fleming boys’ game with his second string men. They took the lead early in the game and kept it throughout the time. Not once did Fleming threaten to overcome the disadvantage of their start. Toward the end the coach took out all of his men except Adkins and put in a fresh string of substitutes.

Fleming brought a large crowd of fans, and the spirit of friendly rivalry was keen between the other sections during the game. This was one of the most enjoyable meets of the season.

The seniors of WHS gave Karl E. Day, Business Manager of the Black Kat, a surprise birthday party Tuesday night, April 17, at the home of Dr. and Mrs. J.W. Combs. The rooms were decorated for the occasion. After the party, the group visited the home of Prof. and Mrs. Wm. Harris and listened to the radio, then serenaded Prof. Jack Glenn. Those attending the party were: Miss Hazel Back, Mildred Speaks, Pansy Webb, Jennie Caudill, Messrs. Hobart Combs, James Taylor, George Taylor, Orell Fields, Karl Day; and Mr. and Mrs. Wm. Harris. A number of seniors were unable to come.

The junior class of the WHS gave the seniors and members of the faculty a reception at the home of Supt. and Mrs. R. Dean Squires Thursday night. The house was decorated in the class colors, purple and white. Entertainment consisted of games, music and a fortune telling stunt by Rosa Hale, a member of the junior class. A buffet luncheon was served. Mrs. Squires and Miss Colyer, a sponsor of the class, assisted the juniors in entertaining the graduating class.

The commencement address will be delivered by Dr. S.B. Lander of Winchester, on Friday night at 7:30 in the new graded school auditorium. He is a speaker of ability and not a stranger here, having begun his ministry at the Presbyterian Church of this city several years ago.

The Whitesburg High School boys ended the basketball season with a whirlwind game with Jackson High Saturday night, in which the local boys were victorious by a score of 10- 4. The game was one of the fastest and most satisfactoy, from our point of view, that has been played on the local floor this season. Jackson came here with a victory to its credit and with the determination to repeat the stunt. Whitesburg felt that they needed a victory. The boys on both teams fought valiantly, but the Day-Wright- Baker-Cook-Hall combination was too strong for the Eversole-Slusher-Strong- Goff-Rose delegation.

The splendid teamwork of the Whitesburg boys was the feature of the game. It would be hard to say who starred for all did star parts. Wright was high point man with six to his credit. Day played his best game of the season, and Cook was like a flash in his movements on the floor — this, too, despite the handicap of an infected place on his hip. Hall, at standing guard, came through in great style, and showed that he has the makings of a real player. Baker was still suffering from an injured knee, but he rendered invaluable service to the team by his generalship.

The girls lost to the Fleming girls. This was the second encounter. The first, a few days ago, was an early victory for Whitesburg, but the visitors came back with enough determination to get a 5-3 count. Two long field goals, one by Brumer and the other by Maynard, gave them the victory. They showed a decided improvement in playing.