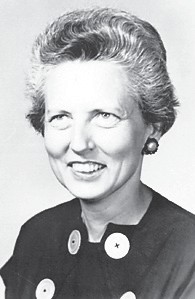 Mrs. Mary Emma Weakley Lewis was born on May 11, 1916, the second of five children of Lucille Thompson and Samuel DeHaven Weakley. Mary Emma had one older sister, one younger sister, and two younger brothers. She grew up on a 360-acre farm near Shelbyville, where she often was responsible for caring for the younger siblings. She had many fond memories of helping her father milk the cows and performing other farm chores. She specialized in homemade ice cream.

She graduated from Bagdad High School, where she participated on the girls’ basketball team along with her older sister Martha Anne. She later taught her son, Martin, to shoot basketball free throws. Unfortunately for Martin, the shot was a two- handed, underhanded scoop shot that was not considered very ‘manly’ by the time he played in high school.

She met her husband, Maurice Lewis, while they were both at Georgetown College. After graduation in 1937 with a degree in English, she taught fifth grade in Finchville, making a grand salary of $80 per month. She and Maurice married August 9, 1938 on a day that was so hot that the candles on the mantle melted! Mary Emma’s mischievous brothers disabled Maurice’s car by removing the distributor cap, and the newlyweds had to begin their honeymoon to Chattanooga, Tenn., using a borrowed car. 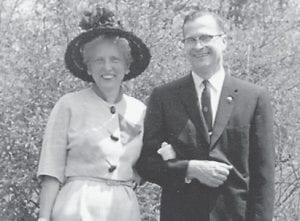 Mary Emma thought she had come to the end of the world on her first trip to Letcher County when she read the road sign on old Highway 15: ‘Enter Letcher — Leave Knott”. (She read it as ‘Not’).

In September 1950, Mary Emma made a bargain with Letcher County Schools and Fleming-Neon High School. She would teach school if daughter Sue could start first grade although only five years old. Mary Emma thus began a Letcher County teaching career that was to last 32 years as a history and English teacher. She taught at Fleming-Neon four years before being offered a job at Whitesburg High School, where she started in 1954. She retired in 1982. 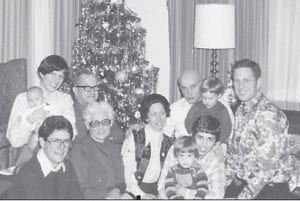 The Lewis family is pictured in this Christmas photograph.

She was beloved by many of her students and continued to be thrilled and honored when former students would stop by and ring the doorbell to say hello. Even after she and her husband moved to Wesley Village in Wilmore in 2002, students still came to visit. Rex Polly, a Whitesburg student-athlete, was a frequent visitor. One of Mary Emma’s favorite students at Fleming-Neon High School was Johnny Cox, who later transferred to Hazard High School before playing for the University of Kentucky from 1956 to 1959, making All-American and leading the Wildcats to the NCAA basketball championship in 1958.

Mary Emma truly loved eastern Kentucky, its people, her students, and her eastern Kentucky home. She vehemently defended Kentucky whenever criticism was aimed at Appalachia. She was especially proud of the large brick home with white pillars that she and Maurice built on Virginia Avenue overlooking the Upper Bottom section of town. To this day, it is clearly visible from old Highway 15 heading toward Pine Mountain Junction. 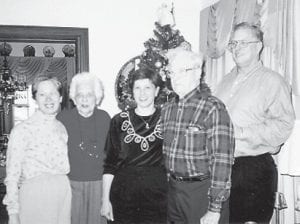 FAMILY PORTRAIT — Mary Emma and Maurice Lewis are pictured with their, Anne, Martin and Sue.

During every Christmas season, her two-story colonial style house on 403 Virginia Avenue shone with red candles in every win- dow. Folks looked forward to seeing the red candles, like looking for the sun to rise every morning. In fact, when Anne put the house on the market to be sold, a neighbor in the Upper Bottom called and told Anne not to sell the house to anyone who wouldn’t promise to continue decorating the windows with the red candles.

While in Whitesburg, Mary Emma was well known for her spaghetti suppers and Thanksgiving Day dinners. She also loved to bake, and no holiday or birthday ever passed without a cake. When her son was a junior playing on the WHS football team, she once cooked a spaghetti supper for almost the entire team. She cooked her homemade spaghetti sauce and meatballs for hours before serving. Coy Pigman, Dean McCloud, Stevie Stamper and Windle ‘Buck’ Sparks were among players present. Many players went back for seconds and thirds. 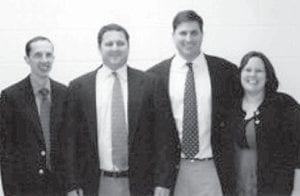 The four grandchildren of Mary Emma and Maurice Lewis are Joel, Derek, Keven and Emily.

Mary Emma and Maurice had four grandchildren. Anne’s son Joel is a traffic engineer senior with the Lexington Fayette Urban County Government. Martin has two sons; Derek is a CPA and a certified financial planner, Keven is a mechanical engineer. Sue’s daughter Emily has a BSN nursing degree. Four great- grandsons extend the family heritage. Joel and Bonita have two sons, Mark and Levi. Emily and Matt have two sons, Will and Blake.

Mary Emma loved to travel, and she often served as a sponsor for student trips to Europe, Washington, D.C. or New York City. In 1972 she and Maurice made a special trip to South America to visit their son, Martin, and his wife, Kaye, who were living in Sao Paulo, Brazil. Rio de Janeiro and Iguassu Falls were among highlighted places visited. In Brazil, coffee is served after the meal, and Mary Emma never could adjust to not having her coffee served while she ate. This was her only complaint about the trip.

She was a very active member of First Baptist Church where she taught Sunday School for many years, and she was a member of the Garden Club and the Whitesburg Woman’s Club. She and Maurice also attended North Fork Baptist Church in Whitesburg. Longtime friends in Whitesburg included Cossie and Hazel Quillen, Lee and Rose Moore, Lewis and Frances Ammerman, Steve and Virginia Combs, French and Minnie Hawk, Byrd and Wanda Hogg, Jack and Mae Cox, Dr. J.E. and Margaret Crawford, R.C. and Frances Day, Dood and Dot Webb, Leonard and Hazel Lewis plus whoever was the current minister at First Baptist Church. Many family photos show a mixture of these couples partaking of a home-cooked meal around Mary Emma’s large dining room table.

In 2002, Mary Emma decided that her dream home was too large for her to keep up, and she and Maurice moved into assisted living at Wesley Village in Wilmore. She was a resident at Wesley Village when she died August 30, 2005 at age 89. She is buried in the Lewis family plot in Sandlick Cemetery outside of Whitesburg.