The 1984 Whitesburg High School baseball team was the last team to be coached by Buddy Roe.

Mr. Buddy Roe is a native of Pike County and a graduate of Belfry High School. He graduated from Pikeville Junior College in 1959, Pikeville College with a bachelor of science in 1961, received a master’s of art in education from Morehead State University in 1974, and went on to finish his Rank I program with a principalship certification at Morehead State. He joined the faculty of Whitesburg High School during the 1960-61 school year.

From the 1980 yearbook dedication: “ Mr. Roe is known to the student body as a teacher who possesses both wit and wisdom. His enthusiasm for learning and for life is shown in his classroom activities. He has a rare quality of making learning fun.

“As a sponsor of the Black Kat, he spends many hours in supervision. He devotes unselfish hours to the baseball team and other phases of the athletic program. 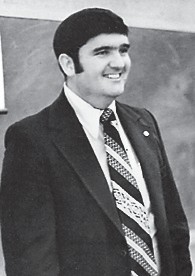 “Mr. Roe is a leader in both school and community.

“Such a person as Mr. Roe deserves to be the recipient of the 1980 Yellowjacket Dedication.”

Mr. Roe is married to Donna Adams Roe and they live at Isom. They have one son, Bobby, and four grandchildren, Justin, Ryan, Chelsea, and James, all of Georgetown, Ind.

On his retirement from Whitesburg High School, the yearbook honored him with the following: “ The word ‘ buddy’ implies a friend or companion on whom you can depend for friendship and support. Never was anyone more deservedly nicknamed Buddy than Doyle Roe.

“For 31 years, Mr. Roe has been a teacher and friend to countless students and teachers. He has served as sponsor to the Black Kat Staff, the Quill and Scroll Club, the Boy Scouts and as assistant basketball coach.

“Anyone who talks to Mr. Roe for more than two minutes quickly learns that one of his great loves is baseball. He has a thorough knowledge of the game and enjoys it on all levels. For 25 years, he was the head coach of the Whitesburg High School baseball team. As for his favorite professional team, there is no greater fan of the Cincinnati Reds than Mr. Roe. 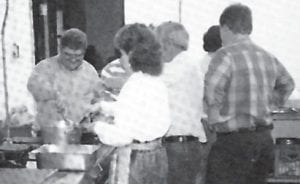 Buddy Roe is shown instructing his fellow teachers on the art of making gravy for the faculty breakfast.

“Although Mr. Roe will not be here at Whitesburg High School, it will be many years before we forget his sense of humor, his dedication and his enjoyment of life. We will miss you Mr. Roe. Enjoy your Reds games and travels.”

The 1984 Whitesburg High School baseball team was the last team to be coached by Mr. Roe. The team had a record of 20 wins to 7 losses. In the district tournament, they defeated Riverside 7 to 0 but lost to Knott County Central 0 to 1.

Coach Roe had this to say about this final team: “With seven starting players from last year’s team gone, the 1984 season looked to be a rebuilding one for the Yellowjackets. But with the six seniors (Jamie Creech, Tim Smith, Ronnie Bowling, Claude Little, Tim Howard, and Gary Lucas) leading the way, this team raised a few eyebrows as they won 15 straight games at one point, and finished the season with a record of 20 wins and 7 losses.” 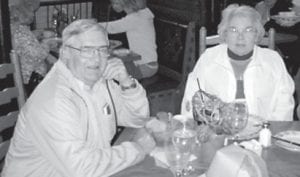 Buddy and Donna Roe enjoy a meal on one of their vacation trips to the Carolinas.

The six seniors had this to say about their coach: Jamie Creech, “I feel very fortunate to have played under Coach Roe. He is not only a fine coach but an outstanding person”.

Ronnie Bowling, “Whitesburg High School was lucky to have such a great coach. He taught us not only to play baseball, but to take pride in ourselves and have some class. We’ll miss you, Coach.” 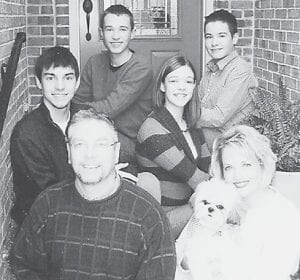 Pictured are Bobby and Melissa Roe and children Justin, Chelsea, Ryan and James.

Tim Howard, “Coach Roe has been a wonderful coach as well as a wonderful person. He taught us so much more than just the game of baseball.”

Gary Lucas, “Coach Roe, it has been an honor to play ball for you. You are a great coach.”

Buddy Roe inducted into the Coaches Hall of Fame

Former Whitesburg High school baseball coach Doyle ‘Buddy’ Roe was inducted into the Kentucky High School Baseball Coaches Hall of Fame on January 16, 2012. He led the Yellowjackets for 25 years and his overall record was 238 wins to 169 losses. Roe’s teams were champions of the East Kentucky Mountain Conference six times, and he was selected as the EKMC Coach of the Year five times. His teams were 48th District runner-up seven times.

He was a teacher in the Letcher County Schools for 31 years. Besides baseball, he was also an assistant coach at Whitesburg High in football for six years and in basketball for one season. He was director of the Whitesburg Little League for several years, was on the staff at Morehead State University baseball camp for 10 years, assisted Cincinnati Reds scouts with tryout camps in Somerset and Hazard, and coached American Legion Baseball in both Whitesburg and Hazard. Mr. Roe was inducted into the Letcher County Sports Hall of Fame in 1984. 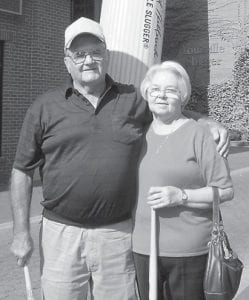 Mr. Roe was also the first teacher to teach off campus classes in Letcher County for Southeast Community and Technical College. He also was the first coordinator for the off campus classes held in Whitesburg, responsible for registration, tuition collection, and the procurement of books as well as general oversight of classes taught. This was the beginning of what would later lead to the establishment of the Whitesburg Campus for the college.