The senior class of 1970 toured Washington and New York on April 9 to 14, 1970. In Washington, the class toured the Capital, the Smithsonian Institute, Lincoln Memorial, Wax Museum, Georgetown and the Washington Cathedral. For entertainment the class saw “Hello Dolly” at the Warner Theater and also visited an amusement park in Maryland.

On Sunday, April 12, the class left Washington and traveled to New York. They arrived there around 2:20 p.m. and toured the Statue of Liberty. Sunday evening the class saw at Radio City the Rockettes and the movie “Airport”.

On Monday, April 13, the class toured New York seeing the Empire State Building, Chinatown, Greenwich Village, the United Nations and various other places on a guided tour by bus. That evening, the class attended Plymouth Theater, seeing a play called “The Plaza Suite”. They then returned April 14, arriving in Whitesburg at 5 p.m. 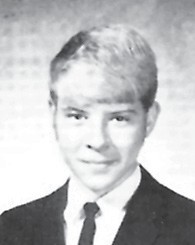 Sixty-five students and eight sponsors went on the trip.

Kenneth Addington, son of Mr. and Mrs. Leonard Addington, Ermine, won first place in the Regional Essay Contest. His essay was titled “The Disabled Veteran Manpower Resource in My Community”, which was sponsored by the Kentucky Commission on Employing the Handicapped. Mr. Addington received a $25 savings bond as a prize.

Addington won fourth place in the statewide judging of the essay and received a $50 savings bond.

Kenneth is a senior at W.H.S. and he had English under the instruction of Miss Jeanette Wampler.

“Gone With the Wind” was the theme of the 1970 junior-senior prom which was held on May 23. The W.H.S. cafeteria, the setting for this year’s festivities, was decorated as a pre-Civil War Southern plantation. Approximately 150 juniors and seniors attended the prom. 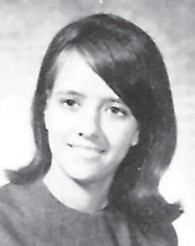 At 11 p.m., Donna Hall, vice-president of the junior class, welcomed those attending. Ronnie Biggerstaff, president and spokesman for the senior class, thanked the juniors for giving the prom. Mr. Jack Burkich, principal of W.H.S., then announced the Prom King and Queen, who were elected by the junior class. Debbie Clark was chosen as Queen and Curt Casolari as King.

The yearbook staff sponsored a picnic and dance, May 25, 1970, at the W.H.S. gym. The picnic was from 7 until 8 p.m. The menu was hot dogs “with your choice of mayonnaise or mustard,” potato chips and cokes. The dance was from 8 until 11:30 p.m. The band was the Honeysuckle Grapevine. Approximately 100 students from the grade school and the high school attended. The school picnic was the last social event for students at W.H.S. The funds received went to the annual staff. 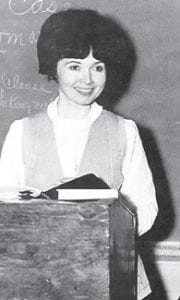 Herby Smith, W. H. S. senior, was presented an honorable mention certificate for excellence in mathematics at the annual Science- Mathematics Achievement Program of Eastern Kentucky University. Smith placed 11th among 152 students taking the math test. Marty Newell, also a W.H.S. senior, was 19th on the same test. Chuck Williams and Phillip Craft took the physics test and both placed in the upper half of the 112 taking the test. Williams is a senior and Craft a junior. Whitesburg High tied for 28th among 88 schools participating. Mr. Jimmie Arthur took the group.

My Four Years at W.H.S. by Brian Moore

For four years I have been haunting the corridors of Whitesburg High School from the fairly new English building to the new library, to the very old administration building. I will have to admit they have been memorable years. I think all would agree that after four years here, one could stand just about any place on the campus and say “I remember when I was a freshman old Suzy fell right here,” or “when I was a junior, I asked old, um, what’s-her-name, to go to the prom with me.”

There have been many good times and quite a few bad times since I came up from Richard Adams and Ritter Fugate in the eighth grade. I have had classes under just about every teacher on the hill, and each teacher I had was so different from every other one around that you might find it hard to believe they have been teaching together — some for 15 or 20 years.

When I first came to this strange place I knew none of the seniors, and didn’t care to know them either. But now it seems sort of sad that I have been here four years and most of the freshmen this year don’t know me or any of my friends and classmates. So as the time for graduation draws near, you may notice everyone looking around for a good, last look. Maybe this is the last time you’ll see some of your high school friends. It may be the last time you’ll hear “Your attention please, there will be an activity period.” So say farewell seniors, bid underclassmen “Good luck” as you say good-bye, Whitesburg High School.

In grateful appreciation for untiring devotion, enduring concern, and unfaltering service — we humbly dedicate this, our 1970 Yellow Jacket to you, Henrietta McCleese.