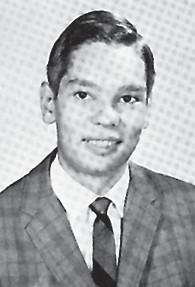 The Harris Award was named in honor of Professor H.H. Harris, who served as principal of Whitesburg High School from 1919 until 1927. It is awarded by the faculty on the basis of leadership, character, and scholastic standing. This year’s recipient is Stephen Daniel Combs.

The Dugan Award is an award named in honor of Miss Ann Dugan, who served as the home economics teacher for 27 years at Whitesburg High School. The award was first presented in 1966 and was awarded on the basis of character, scholastic standing and leadership ability. This year’s recipient is Sandra Lynn Day.

Song dedications from the September/October Black Kat: Vickie Bates to David Baker: Warm and Tender Love. Elizabeth to Ray: Wouldn’t It Be Nice. Clayshan to Danny: I’ve Got You Under My Skin. Candace to Rokie: You’ve Got The Way to Move Me. Charlotte to Freddy: Sweet Dreams. Wayne to Cathy: Wild Thing. Ann to Charlie: Oh, Hold My Hand. Imogene to Roger: Almost Persuaded. Judy C. to Dale B.: Born a Woman. Debbie Marshall to Jimmy Meade: The Dangling Conversation. Betty Gibson to Danny Isaac: Our Hearts Are Holding Hands. Evelyn Sexton to Jimmy Miles: Sweet Dreams. Donna to David: When A Man Loves A Woman. Tommy Fields to Castella Niece: Crying in The Chapel. Sandra Kay to Tim: You Can’t Hurry Love. 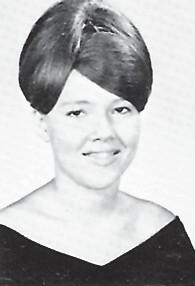 The Black Kat Staff dedicates this first issue (September/ October 1966) to Coach Walter Thomas because of his devotion to the team. Whether they win or lose, he is proud of each and every boy. He has added dignity, refinement, and culture to our school by having the team dress for the pep rallies and the away games, and wear coats and ties. The boys show respect for him by standing to cheer when he comes on the floor at pep rallies. He showed his interest and love for the boys by knowing and calling each one by name and position at the first pep rally. He shows his great concern when a boy is injured on a play — even ones on the opposing side; he always has confidence in the team. He makes the boys want to stay in shape, eat properly and keep training. All the boys like the coach. He is stern, but they like to play for him. If there is a penalty against us, he finds out the reason. He keeps the boys encouraged. He gives them encouragement. He gives the assistant coaches credit for the part they play in coaching the team. With the efficient help of backfield Coach Ed Moore, the work of Coach Hammock, Coach Gerald Frazier in the line, Coach Buddy Roe, working with the junior varsity and eighth grade teams, and the management of Athletic Director Gardner Bates, Coach Thomas should be able to build up a powerful football machine in the very near future. 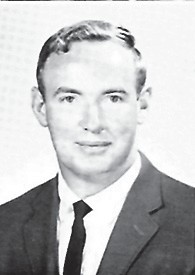 This is why we dedicate this issue to him! Coach Thomas!

From the 1966 December Black Kat, Letters to Santa

Please give the boys in Vietnam a cheerful Christmas, Shirley Gilbert. I want a 56 Chevy, George Allan Adams. Worldwide peace and happiness and that everyone have enough food and clothing so they wouldn’t have to go cold and hungry, Beverly Smith. My driver’s license, Rex Craft. a 12-gauge automatic shotgun, Terry Adams. A big doll that has brown hair, wearing a blue Air Force uniform and stationed in Phoenix, Ariz., and a pair of black granny boots, Jenny Galloway. When you come this year, I hope you will wake me up instead of letting me sleep. I would like to see your white beard and your red suit, Gary Kilbourne. Bring me a hairdryer, Alene Sexton. Bring my brother from Michigan and bring my husband something special and wonderful, Marie Ann Baker. A maroon GRO, Vivian Fields. Bring me Stevie Hale, Shelia J. Day. A 1967 Sting Ray with a 427 cu. inch motor, Roger Collins. A doll that has brown hair, brown eyes, and walks and even talks, Nova Fields. A brand new car with a handsome chauffeur, and I want me a new front tooth, Jay Fields. I would like a Honda, Mabel Bentley. I would like to have a good guitar amplifier, Roy Crawford III. I would like a great big handsome Bobby doll, Karen Kincer. Two or three charms for my bracelet, Emma Day. A pair of skis so I can break my neck, a good old electric bass guitar from Holstein Hardware, the only S&T store in Letcher County, James Holstein. I would like to have a companion, a girl that is cute and has a real nice personality. 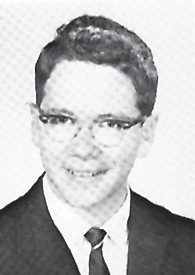 Serviceman of the month

The Black Kat salutes P. F. C. Otis Darrel Short as our serviceman of the month. Private Short is a 1964 graduate of Whitesburg High School. He received his training at Fort Carson, Col. He is a member of the 11th Armor 2nd Cavalry now serving in Viet Nam.

Whitesburg High School truly has a celebrity, William Terrell Cornett, who has recently written a very interesting history of our county. The title of the book is Letcher County, Kentucky: A Brief History. Terry is selling the copies himself. This piece of work came as a surprise to almost everyone, although Terry had been working on it for three months. The book is a brief account of all the major events that have taken place in Letcher County. It begins with the coming of the early explorers and settlers and ends at the present with speculations on the future.

Terry is 17 years old and is a senior here at W.H.S. He writes and collects antiques during his free time. He plans to attend college at Pikeville, after which he will teach literature in a college or university. He hasn’t expressed a particular choice as to the one he wishes to teach in.

Students from several districts attended the meeting and elected students for many offices. The meeting was a new experience for all who attended.

Feb. 14, the W.H.S. Beta Club presented a program for the Whitesburg Rotary Club. James K. Caudill, Terry Cornett and Stephen Combs gave a talk on their hobbies, which were astronomy, antiques, and rockets. A musical number was given by Jeff Hunsaker. Presiding was Karen Martin.

The Beta Club Benefit show was held Feb. 15 in the gymnasium. Gerald F. Combs was master of ceremonies.

James Vlasnik and Junior Holbrook, The Something Else Group, Clayshan Caudill, and Sheila Brown added to the list of performers who sang.

Mr. Polly’s folk dance club danced and Donna Potter, Beth Frazier, and Adrianne Pender danced to the “Devil with a Blue Dress On.”

In a skit, Freddy Mc- Cray and Shannon Banks represented the wrong way to ask for a date and bring the date home. Karen Sue Martin and Junior Holbrook represented the right way.

The program was worthwhile and for a worthy cause.