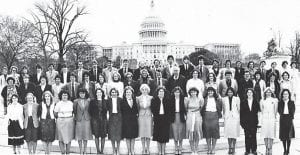 At the beginning of this school year, Mr. Holbrook received a letter from KET describing the network’s planned series, “Scholastic Challenge”. He responded that Whitesburg High School would like to be included. In September, a drawing was held to determine the 32 schools that would be participating. Several students watched the drawing on KET and were thrilled to hear Whitesburg’s name announced.

A faculty committee met and drew up guidelines for selecting the team. KET sent a sample test, and this was given to each interested student. The students were judged by scores on the KET test, grade-point averages and standardized test scores. The team which was selected consisted of Ray Gish, Karen Buntin, Pam Adams, and Roger Boggs. Pam Hall and Ingrid Imperial were chosen as alternates.

Whitesburg High School was well represented at our match with Dayton. The band was there to support the team, and five cheerleaders, Teresa Wright, Lisa Gibson, Telena Short, Annette Combs, and Beth Lucas, were there to provide vocal support. We were surely one of the most enthusiastic groups in the contest! 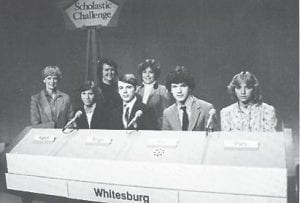 Although we lost the match, we have many memories from that day. Who can forget Pam Hall’s pained expression when our team was behind or Betsy Adams’s superb job directing our band or the cheerleaders’ cheers during intermission? We shall remember Ray’s composure, Roger’s eagerness to answer, and Pam and Karen’s politeness. (They wanted to give the boys a chance to answer first).

The team rounded off the day in Lexington shopping at the Fayette Mall and eating at Chi-Chi’s before heading back to Whitesburg. The trip home was filled with: “If only we had buzzed faster”, “If only we could have practiced one round”, “I wish we could have won”, and “We’ll get them next year!” 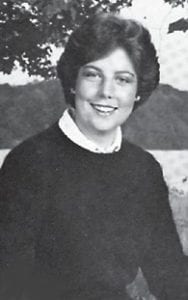 Pamela Faye Hall, daughter of Jack and Carolyn Hall, is recognized with the qualities of character, leadership, and scholastic ability — Miss Yellowjacket of 1983. As well as earning the title of Miss Yellowjacket, Pam has been honored with the DAR Good Citizenship Award, she was an usher in the 1982 graduation, has been a member of the Math Club throughout her high school years, and was a part of the cheerleading squad for three of those years. Pam also enjoys swimming and is also interested in today’s youth. Pam’s future plans include the study of computer programming at Transylvania University.

I, Kaye Gose, will my ability to miss art every Friday for an entire semester without getting in trouble to Stephanie Little. I, Kermit Brock, will all my reckless driving tickets to Forester Dickerson. I, Rocky Craft, will my Red Man and Skoal to Mike Ivey so it will deteriorate his brain like it has mine. I, William Reedy, will nothing. I’m taking everything with me. I, Barry Amburgey, will my ability to insult people without making them mad to Wanda Caudill. I, Ray Gish, will my ability to party and still make good grades to Jamie Estep, my ability to win math contests to Tim Pennington, my excellent musical taste to Jane Masters, and my ability to have my editorials censored to Rhonda Waller. I, Susanne Ritter, will my position as stage band vocalist to Stephanie Meade. Good luck, Steph! I, Jimmy Benson, will my ability to get along with some certain teachers to my less fortunate brother, Danny. I, Mark Boggs, leave my ability to skip to Harold Trent. I, Teresa Wright, will my ability to talk with my hands to Mary Page Polly in hopes that she meets a nice deaf guy, and my ability to never turn in English papers to John Allen Romine. I, Sharon Burton, will my ability to get out of class and run around without getting into trouble to Roger Boggs. I, Mister Polly, will my “cool shoes” to Bridgette Combs. I, Allison Manning will my ability to change schools to Lisa Baker and my cooking ability to Bridgette Combs, who can’t boil water. I, Mark Bates, being of sound mind and blue eyes, leave my ability to attend school, study, finish practice, conquer the world and still have enough strength and energy for whatever to Jeff Fields. I, Tiphanie Bates, will my “ Thanks Easter Bunny-Bok! Bok!” to Coach Sergent in hopes that she’ll carry it on to many more State Tournaments. And I leave my wake-up calls to Patsy Stallard so she can keep everyone wide awake on all long bus trips next year. I, Jeff Sergent, will all my credits to Randall Sexton and Quincy Meade in hopes that they will graduate within the next 10 years. I, Pam Hall, will my ability to keep “perfect” stats and to keep my shirt on in difficult situation to Suzy Reynolds and Missy Combs in hopes that they can do as well as I did. 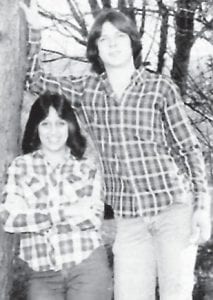 High School was held in the school cafeteria. Each senior was anticipating their ring, which is one of the highlights of the senior year. As the evening drew to a close, Rick Adams and Peggy Wagner were crowned the 1982- 83 Ring Dance King and Queen.

The annual student-faculty basketball game was held on Monday, May 2, pitting the seniors, winners of the interclass tournament, against a team composed of some of the school’s more athletic faculty members.

The seniors made it into the game by first defeating the juniors and then the sophomores. The teams were composed of students who did not play on the school’s basketball team.

The Seniors vs. Faculty game was a very physical one, with most of the fouls being called against the seniors. The senior team, ably coached by Donald McCall and Mark Powell, got into foul trouble early in the game, but still managed to hold a comfortable lead at halftime.

Not to be outfoxed, faculty coach Buddy Roe apparently gave his team some much needed words of encouragement during halftime. Though crippled by the loss of Mr. Henrikson, a major factor in last year’s faculty win, the faculty team managed to pull out another victory in overtime.

New vice-principal Mr. Slone showed what he was made of, sinking some crucial baskets in the second half. Slone stole the show with a deadly series of baskets from the foul-line area and also pulled down a few rebounds.

The game was a very exciting one, and it was a tough contest right down to the wire. The faculty team won by a five-point margin in overtime.