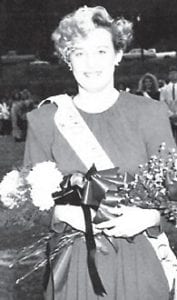 Tension mounted in the air as the queen candidates were each announced. Then, the moment had fi- nally arrived. Miss Alicia Combs was named queen for the 1990- 91 football season. She is the daughter of Matt and Brenda Combs of Linefork. She is a senior and is an active member of the volleyball and basketball teams. 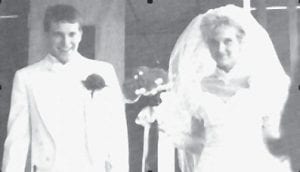 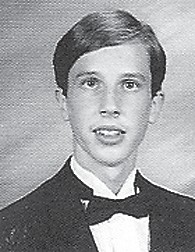 This year’s Yellow Jacket is dedicated to a very deserving teacher and friend. He has taught for 27 years. He was the past sponsor of the following clubs: Pathfi nders Club, N.Y.C. Youth Club, and the Calorie Counters. He was the winner of the National Science Foundation Grant. He also helps officiate quick recall matches for the academic team. He has been married to Sandra for 21 years and has two sons, Matthew and Jon. We are proud to dedicate the 1991 Yellow Jacket to Mr. Jackson Banks.

(The above articles from the 1991 Yellow Jacket.)

The Whitesburg High School drama class will be performing “Look Homeward, Angel”, a play written by Ketti Frings, based on the novel by Thomas Wolfe. Performance dates are scheduled for November 31, and December 1 at the Appalshop. The class is planning to present a school showing to the freshman and sophomore classes on Nov. 29 and to the ju- niors and seniors on Nov. 30, pending approval. 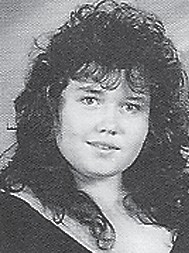 “Look Homeward, Angel” is a play about one young man’s coming of age and the troubles he faces. These hardships include an overpowering mother, a drunken father, a confused home life, the death of a relative, and the heartbreak of love.

“Look Homeward, Angel” is a fitting play for the times because nowadays more than ever, it seems harder to succeed. It deals with problem facing today, especially the younger generation.

Past productions of the WHS drama class include “Ancient Creek, Electric Dreams,” and “Our Town.”

In 1985 a DEA agent, Mr. Camarena, was killed in a drug-related accident. Since then the nation has made an effort to see that this doesn’t happen again. In honor of this agent our country has set aside a special week called Red Ribbon Week. In Kentucky, this week is Oct. 20-28. Wednesday, Oct. 21, was a special day at Whitesburg High School. Everyone wore red ribbons to symbolize being drug free. There was also a door decorating contest. First place went to Mrs. Hubbard and Mrs. Hayes. The WHS SADD Chapter officers are President, Mary Kay Roaden; Vice President, Ann Mullins; Secretary, Laverna Akers; and Treasurer, Alicia Combs. The sponsors are Cathy Adams, Sally Hubbard and Judy Mason. All of these individuals took their part in kicking off the Awareness Week. On Oct. 22, the officers and sponsors, accompanied by Mr. Holbrook and Sandy Hogg, began decorating the campus with red ribbons and streamers. WIFX was also happy to have us come down to the station and make a few public service announcements to advertise the week. The Community Press and The Mountain Eagle were present to take pictures and find out about the week. 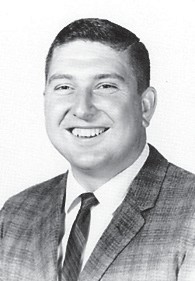 Jenny Collins, the daughter of Jerry and Shelby Collins of Millstone, was chosen as a member of the 1991 Kentucky Music Educators Association (KMEA) All-State Symphonic Band which performed as a part of the 33rd annual In-Service Conference, which was held February 6-9, 1991 in Louisville. Students were chosen as members of the KMEA All-State bands as the result of rigorous auditions held during the fall of the year. Jenny is a student at Whitesburg High School where she is a member of the WHS Band under the direction of Susan Hayes. (The above articles from the November 1990 Jacket Journal.)

On May 6, at 6 p.m. at the Whitesburg First Baptist Church, a beautiful ceremony took place. Well, a mock ceremony to be exact. April Hogg provided the piano; Shelli Jackson and Darin Combs provided the music. Laverna Akers and Junior Holland made a beautiful couple, and it was a gorgeous evening in every way. The mock wedding was part of the home economics class taught by Mrs. Kathy Napier.

(The above article from the 1991 Yellow Jacket.)

Mary Caudill and Tiffany Sexton, students at WHS, recently attended the Regional Star Events Contest sponsored by the Future Homemakers of America at Lee County High School. They won first place in two contest; Miss Caudill in Job Application and Miss Sexton in FHA Facts. Miss Caudill is the daughter of Volena and Lloyd Caudill of Sandlick and Miss Sexton is the daughter of Glenna and Ray Sexton of Sandlick. Both girls are members of the Whitesburg High School Future Homemakers of America club. ( The above article from The Mountain Eagle Nov. 7, 1990.)

They are Rosa M. Halcomb and Joel Weber.

They reached the semifi nals because of their high scores on the 1989 Preliminary Scholastic Aptitude Test (PSAT) National Merit Scholarship Qualifying Test (PSAT/NMSQT). They will now advance to the finalist level, in which they must score well on the Scholastic Aptitude Test (SAT), showing outstanding scholastic records, have the endorsement of their high school principal and complete applications for scholarships.

Miss Halcomb is undecided about her college major or future career. Weber hopes to become an engineer.