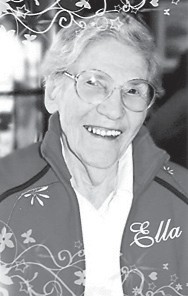 An autobiography by Ella Vermillion Preston, Class of 1934

On a cold frosty morning in late November 1916, a squalling red faced infant was born in the Little Cowan home of John Morgan Vermillion and his wife Louella Adams.

After much discussion it was decided to christen her Ella Martha after both grandmothers, but ever after she was called ‘Ella Jane’ by her paternal family. The paternal family consisted of Zacharias Morgan and Douglas Vermillion, who gave us our nickname, ‘Dug’, as in the Dug Swimming Hole which was in a bend of the Kentucky River just above Whitesburg, where most of the young men in the 1800’s learned to swim. I can still remember stones from his fallen chimney on the walking path. Dug later lived where the Appalachian Regional Hospital is at present.

The maternal side of my family knew me as ‘Ellie’ or ‘Marth.’ A few of my maternal relatives had interesting backgrounds; Manon Jenkins and Stephen Adams, for instance, lived near Pine Mountain at Cowan in Whitesburg, and wanted to become soldiers in the Civil War, but was unable to due to their ages. One was too young, the other too old. Another relative, Moses Adams Sr. of Pert Creek, reportedly held the first Circuit Court under a beech tree in his yard!

When spring came the family faced a troubling question, before his marriage, her father had made his living by driving loaded wagons or buggies with “drummers” to Appalachia, Va. The round trip necessitated spending one or two nights camping in or under his wagons, but now the question arose . . . what job should he follow now? He couldn’t leave his wife and baby in the section he lived in because the house was too primitive. It was also too isolated to have close friends or neighbors; there was no kin to call on for help.

So what recourse did he have? Change jobs! It meant to sell his team of horses and look for jobs where he could be at home nights; due to hard times, his new job would be to become a farmer. There wouldn’t be much money, but we wouldn’t starve. There was always a market for vegetables or animals and we could all work happily together, so for the next 50 years of their lives they followed their dream.

My earliest recollection was of me lying on a quilt in the shade of a tree, while my mom hoed corn around me. As I grew bigger, the quilt was discarded, but she still hoed nearby.

Living on a farm as we did, we almost always had motherless baby animals so I adopted pigs, lambs and calves. It was my job to give them bottles of milk, one at a time.

We had no screens so the pets had access to the inside of the house when and if they chose. Once Porky, the pet pig, was lying asleep in the sunshine just inside the front door. I was beside her with my head against her body. She suddenly rolled out the door to the ground below, and when my mother laughed, I cried. I never knew what happened to Porky after that; he just came up missing, but I never got a satisfactory answer. However, Bess, the pet lamb, grew up to start a small flock of sheep.

As I had nobody to play with much of the time, I grew up self-sufficient. When an aunt gave me a storybook about baby animals, I had to learn to read myself.

I was nearly five years old and about ready for school; I could do simple arithmetic and read. My schooling was solved by a parent deciding to take me on Tony, our horse, to Pert Creek School, where a distant cousin we knew was teaching. They always tried to send me with cousins so I’d have someone to look out for me.

It was two or three miles to school, and we only passed five houses. For a few weeks all went well, but they had started construction on Highway 119 across Pine Mountain. The problem was we had to cross the road where men were using picks, shovels, horses, air compressors, steam shovels and probably other equipment. And oh, the noise!! My parents were so afraid for me to cross that area, and would barely allow me to go with my cousins. Something had to be done; their plans for my education weren’t working!

The only solution was to move to another place, and they did! We moved to what was commonly called the John Dug house, which my grandfather owned and sold to my dad. My first glimpse of my new home was a rail fence (stake and rider) round the house and garden. My mother and I sat on this fence and waited for the wagon that was hauling all our few possessions.

The house was in very bad condition, having been rented for years to men who worked at a sawmill nearby. The renters had hung greasy skillets on nails around the walls, which left grease marks and black spots. The inside of the house had heavy building paper nailed to the walls and overhead, which was for insulation rather than looks.

We had only lived there a few days when the rains came. The roof was like a sieve and began to leak so badly that pails intended to catch the leaks were overflowing. Most of the rainwater collected atop the paper ceiling until the weight caused the paper to loosen and spill its contents on anything below. Mixed with the water was soot and ashes from the chimney, therefore it was apparent that a new roof was the first priority. Dad hired help and a bright new metal roof was nailed on quickly. I was lucky to miss most of the mess as school began.

Qualified teachers were scarce and difficult to find or hire in those days. They had to come from faraway places to the mountains and board in the community. There were very few school supplies and getting off for snow or sleet was unheard of in those days. The attendance would drop to two or three students, but school would still be in session.

During bad weather, we had to watch for high water because our road was actually the creek bed. We would lay planks down where we had to cross the creek. However, rising water changed our route, and we had to cross where it wasn’t deep. Our fathers later dug paths around some of the hills, which would help us get home when water was a problem.

A school lunch was usually two biscuits with applebutter for each child and was carried in eightpound lard buckets. One biscuit was eaten on the way to school, the second at first recess, which left most children hungry as the school day ended. Therefore, children would search for green apples and wild plums as they started for home, sometimes going to the tops of the mountains to find them. Children who lived within a half a mile of the school were considered very lucky because they went home for lunch at noon and weren’t so hungry at the end of the school day.

My first teacher, Miss Adams, placed me in the first grade rather than primer. About 22 of us were crowded in a side room of a two-room school, ages 5-6 years, two boys taller than our teacher! We sat two or more on seat made of two-inch slats and had no desks. We either sat on our belongings or held them in our arms all day. Miss Adams also taught a freshman high school class of five students: Rufus Fields, Alice Fields, Anna Johnson, Vessie Jones and Geneva Gibson. Sometimes in the afternoon, small children would be sent home so the teacher could have high school lessons. That left us with no older brothers or sisters as we started for home, and we nearly always scared ourselves talking about mad dogs (dogs with rabies). Due to this, most of us ran all the way home!

My second-grade teacher was Miss Smith and was brought in from outside the community. The outstanding thing she did that I remember was to have an eight-foot stage built in one corner of the already crowded room. She used a kerosene stove and taught cooking to the older students. As before, we small ones went home early. We found even more scary subjects to talk about and ran the whole one or two miles as we did when we talked about the mad dogs which might get after us!

All I remember of my third-grade teacher was that she was a Miss Marrs, who later married my cousin, Beldon Long. On the first day, she read a long list of rules we were expected to obey. She had barely finished her list when another cousin, Beldon’s sister Ruby, and I accidentally jumped up at the same time. She stood us in the corner for what seemed like hours but must have been 10 minutes. I never made that mistake again, and I don’t think Ruby did either.

Now I was growing up and promoted to the fourth grade and the ‘big’ room. Here my first teachers were local married women who taught a few weeks and quit. They were replaced by two men, one of whom had never had a day of high school or college. We called him ‘Uncle Patrick’. The other, Edgar Banks, had some college training and was certified, I think. We did all kinds of interesting new activities when he was teaching. Some of the activities were games, books paid for by having pie suppers, manners, science experiments, writing, singing, etc. He kept us busy and happy, and of course, we dearly loved him.

After two years, Edgar returned to finish his degree at Eastern State University, and every child in school wiped away tears. When he returned home to teach, he married and lived on Little Cowan. He taught physics, chemistry, science and other difficult subjects at Whitesburg High until his retirement. Here again, he was a popular teacher and walked Cowan Hill as there were no buses.

In grade school, we always had a big Christmas program. Parts were given at Thanksgiving, and we practiced every day until our program. We decorated with pine and holly, but I don’t remember a tree. We each received three sticks of peppermint candy which the teacher counted as he handed it to us. Sometimes, our names/ ages would be given to Alice Lloyd College, and they would furnish nice small gifts we loved. Times were poor, and for many these were the only gifts they received.

We received our first visit from a county health physician during this period. We had smallpox immunizations, three shots for typhoid, sometimes for diphtheria and later a test for TB. The mere mention of Dr. Dow Collins’s name caused fainting and running away among the children.

For my eighth grade, we again had the teacher with no training but plenty of experience. There were five of us, and we all were promoted to high school. Four graduated and three made teachers after completing college; the other did substitute teaching. While in the eighth grade, we disliked history and we came up with the idea for each one to study one particular paragraph in our assignment. We became letter perfect on that one topic and expressed it by a frantic waving of hands when the teacher called the topic. He never knew, or did he? It was a custom to repeat the eighth grade another year before we went to high school. We did not because we were ‘A students.’ I was 13 that year and going to high school. It was an exciting time!

To be continued next week.