Compiled by Bennett Welch From the March 15 Black Kat 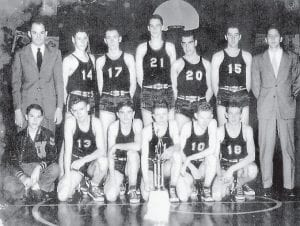 What it feels like to play in the state tournament

The state tournament, which is the aim and goal of every WHS play, is the highest aim one can achieve. The feeling of playing in the state tournament is unforgettable. As coach Pigman expresses it, “You reap what you sow.”

The goal to achieve is at the state tournament playing for WHS. It may be expressed as “it takes a little courage and a little self control and determination, if you’re out to reach the goal.”

Even though our mark fell short of victory, Lexington knows Whitesburg is on the map. — Bob Stout

I felt just like I do when I’m around women. Plenty scared! A wonderful scared feeling, just the same. — Cann Craft

I was thrilled to death to play in the state tournament, all those people looking at me. It was a great privilege to play in the coliseum. — John R. (the movie star)

It’s really a great feeling to have the privilege of playing in the state tournament. I’ll never forget it. I had the best time and enjoyed it more than anything I’ve ever done in my life. I only hope I’ll have the chance to go again before I graduate. I especially enjoyed going to Lexington and back with Mr. Ray Pigman. — Roe Adkins

Playing in a state basketball tournament is a thrill dreamed of by every high school player in Kentucky and comes true to very few. Playing in this tournament is unforgettable and I will always look back on it as the biggest thrill and greatest goal attained in my life as a player. — Carrol Sexton

It has always been my greatest ambition to play in the state tournament and when I got there it felt very good. I had more fun than I had ever had. — Jimmie Bert Tolliver

I hardly realized that we had finally reached our goal, so to assure myself of the fact I asked Cann how he felt. When no answer came back, I turned to see what was wrong. Cann was right in the middle of the floor, his mouth open, and he was looking straight up. He finally murmured, “This place is bigger than all of Pine Creek.” — Eddie Collins

It feels good to get to play ball in a big place like that. It felt good to play and represent your school. You give your school a name by playing ball at the state tournament. It feels good to get to do something when you work for it, better than it does if you don’t work for it. I enjoyed running around with the basketball boys that I have played with this year. I enjoyed going to the games with the coaches. — Jimmie Whitaker

Going to the state tournament as a manager was hard work as well as fun. We did three main things while in Lexington: eat, sleep, and walk. But we did enjoy the tournament. The boys represented the Whitesburg High School and they showed it by playing the best brand of ball. — Maurice Blair, manager

One of the biggest thrills of my life. — Ronnie Kincer

Bob Stout: Played four years; lettered last two years. He was a good trainer, lover of the game, conscientious, fine competitor, good team man, and a master of the backboard. Most underrated, but one of the most valuable centers in the state.

Gerald Kincer: Played four years, lettered last year, alternate starter at guard, but established himself as one of the essential boys of the team. Always dependable and consistent. Always lived the life that is essential for a good athlete.

Ronnie Kincer: Four years, lettering last three, captain and floor general. Lack in high scoring did not keep him from being recognized as one of the most valuable boys on the team. Recognized as the playmaker, great competitor, good defensive, ballhawk and pace maker. Honorable mention All State!!!

(Comments from the coach mean more to the boys than any sportswriter of any big newspaper. Coach Pigman usually reserves all of his comments for seniors who have played their last game for the Yellowjackets of Whitesburg High.)