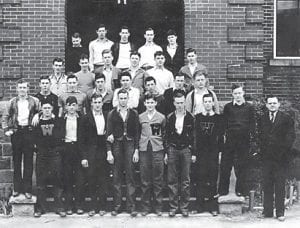 The football team, whose average weight was about 149 pounds, played a tough schedule last year. Their hardest and most interesting game was played with Fleming, which was nicknamed “The Power House Gang.” The W.H.S. Yellow Jackets were then trampled by Fleming for the second time in years, the Yellow Jackets winning 10 games in 10 consecutive years. Out of nine games played last year the Yellow Jackets won five and lost four.

Sanford Adams has coached the B team in basketball for the last few years and has made an excellent showing by winning 15 of 16 games.

The captain of this year’s squad is Walker Pigman and Keithel Reynolds is the manager. 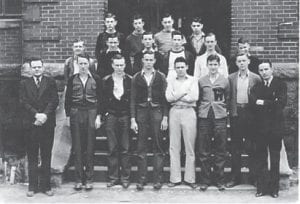 Coaches Follace Fields and Dean Addington of the faculty at WHS announced this week that the fall football practice will begin on Monday, two weeks before schools open. It was learned from Mr. Fields that uniforms will be issued at 1 p.m. on Aug. 19, at the Grade School Building. Fields stated that, “all candidates for the 1940 team must be at the Grade School Building promptly at 1 o’clock, first come, first served.” The first practice session will be held on Lewis Field, rain or shine, promptly at 3 p.m. on Monday, Aug. 19.

Probable candidates, excluding incoming freshmen, will include the following: 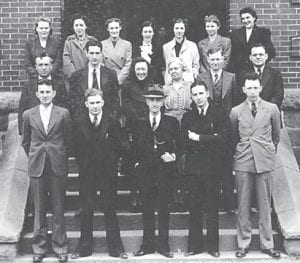 This article appeared in The Mountain Eagle on Aug. 8, 1940.

Despite the fact that all home games will be played in the high school gymnasium at Fleming, prospects are exceedingly bright for a successful basketball season at Whitesburg High School this year. The Whitesburg gym was destroyed by fire last spring and as yet has not been replaced. Seven lettermen from last year’s strong aggregation greeted Coaches Tolliver, Addington and Fields in the initial practice session Monday afternoon, these being Amos Cook, Herman Bates, Bill Tolliver, Estill Blair, Walker Pigman, Clay Stallard, and Kermit Lucas. However, no positions on the first team are cinched as the returning lettermen are being pushed by a talented group of newcomers including John Brown, Ed Moore, Junior Parsons, William Floyd Mercer, and Bennett Sexton.

Fighting under great handicap, the WHS basketball team has proved that it can and will play ball. Although they have to travel about sixteen or seventeen miles through all kinds of weather to practice, the Yellow Jackets have defeated such teams as their ancient rivals, the Hazard Bulldogs and Belfry, one of the outstanding teams in the Big Sandy Conference, which boasts of Inez, and other very strong teams.

In their only home game thus far, with Belfry, the team and coaches were greatly encouraged by the enthusiastic support of the Whitesburg fans, and all they ask is that this support be maintained throughout the few home games scheduled. Home games are played at the Fleming High School gym, and though this is rather inconvenient, fans will be amply repaid by a fine brand of basketball and by the satisfaction that comes from backing the underdog. And while we are on the subject, let’s encourage the construction of a gym in our city. Let’s back our athletics as one of the vital points of our school program.