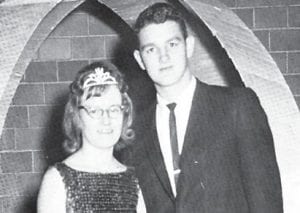 The Harris Award was named in honor of Professor H. H. Harris, who served as Principal of Whitesburg High School from 1919 until 1927. It was awarded by the faculty on the basis of leadership, character, and scholastic standing. This year’s recipient is Gary Garrett. From the May edition of the Black Kat: His birthday is September 17, 1946, his sweetheart is Linda Fleener and his favorite song is ‘Sinner Man.’ He was voted the Best Emcee in the Senior Popularity Poll, by the senior class. Gary also played center on the Yellowjacket basketball team.

Mr. Rader reports a new interest in physical education. A new program is being carried out. P.E. I and P.E. II are offered to first- and second-year students. P.E. I consist of team games and P.E. II of individual sports. All boys have P.E. uniforms. The past six weeks P.E. I has worked in football. The following boys received special recognition for good work: Bob Fisher, James Collins, Thomas Robinson, Larry Crase and David Addington. 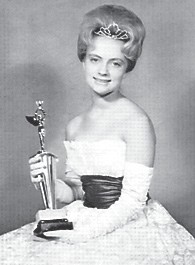 P.E. II boys have been trained in tennis and horseshoe pitching. Boys who have excelled in these fields are Howard Couch, Jerry Pease, Carl Amburgey, and Anthony Holbrook.

P.E. I and P.E. II are required unless a student is in band or goes out for athletic sports. In that case only P.E. I is required.

’California Sun’ to the Sunshine Girls, Sharon A.; ‘Understand Your Man,’ Jughead and Vicki; Bennie and Charlene, ‘Kissin’ Cousins’; Harold to Yvonne, ‘Out of Limits’; Tula to Edison, ‘Young and In Love’; Tootsie to Glenn, ‘A Letter From Sherry’; Duke and Frank, ‘I Saw Her Standing There,’ Miss Lilly Collins, Abigal Beacher, ‘My History Teacher’; Tootie to Ernest, ‘My Heart Belongs to Only You’; Michael to Phyllis, ‘Out of Sight, Out of Mind’; Mike, Coy, Ricky B., Robert B., ‘My Boy Friend Has a Beatle Haircut’; Tab and Sonja, ‘We’ve Got to Stop and Think it Over’; Brenda Davis, ‘Puppy Love’; Mahala to James, ‘It’s All in the Game’; Red and Shade, ‘Young and In Love’; Ronald Day, ‘That’s All She Wrote’; Ty and Shirley, ‘I Want to Hold Your Hand’ (but Mr. Burkich won’t let me); Aline to Charlie, ‘My Heart Belongs to Only You’; Happy Chan, ‘Walkin’ the Dog’; Phillip to Joyce Niece, ‘I Want to Hold Your Hand’; Mr. Burkich, ‘It Takes a Worried Man to Sing a Worried Song’; ‘Sugar Shack,’ Miss Fugate’s Room. 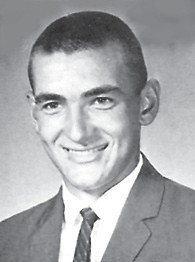 Miss Kay Kincer, daughter of Mr. and Mrs. Wallace Kincer of Mayking, was chosen Miss Letcher County in a contest sponsored by the Whitesburg Junior Chamber of Commerce. Because she is only 16, she was not eligible to represent the county in the Miss Kentucky Mountain Contest at Hazard, and Miss Janice Potter, runner-up, took her place. Miss Kincer is a junior at Whitesburg High School.

On the opening day of the school year, I’ll wager more seniors were lost than all the other students. This doesn’t sound true, but if you’ll think of it, it will become quite obvious to you. Lost in the daze of choice of teachers, of subjects, of plans for the future. The students are still in a daze because they haven’t yet realized that school has really begun. They linger over the good ole days, namely summer vacations, swimming pools, driving cars, sunbathing, reading books, watching TV, and being lazy in the shade, we’ve now settled down to that well known grind, called schoolwork.

The end seems to be coming fast for the Senior Class of 1964, it will be here faster than we think, then all of us will take that step from the child’s world to that of the grownups. This will be a giant step for most of us. One thing that will be hard for some seniors, is the fact that the adults will not accept them, and our high school friends will reject us. Those few will feel left out, but they will come out of this with flying colors. We Seniors of ’64 will have to conquer or be conquered. Let’s buckle down and stay here fighting.

This is my last day. My eyes are filled with tears and my heart filled with sadness for I am leaving this school, which I entered March 12, 1962 as a sophomore. I finished my junior year and two weeks and four days of my senior year. I have thoroughly enjoyed every minute I have spent with all you wonderful kids and very helpful teachers.

Students, you have a school to be proud of. Stand behind it and make the most of every day. I have never before attended a school like W.H.S.

Everyone has been extra nice and has gone out of their way to be friendly. I am proud to say I have been a student here.

I hope and pray that the senior class takes the Washington, D.C. and New York trip. I love every one of you. Thanks for putting up with a goof like me. Linda D. Childress, Mann, W.Va.

Mr. Gatton’s chorus, accompanied by the talented Ella Kae Hammock, has been invited to perform at civic clubs during the next few weeks, twice for the Lions Club and once for the Rotary Club, and on March 21, they were invited to perform on Channel 11 in Johnson City. This chorus is composed of about 25 voices. They meet the third period each day and their accomplishments are excellent. They also gave a performance for the P.T.A. on March 16.

Ella Kay Hammock won first place in a musical contest in Pikeville on March 14. She will now be eligible to enter the state contest in Louisville.

Winners of the fifth period P.E. Shuffleboard Tournament were Marsha Frazier and Sharon Bentley. Parting advice from some of the seniors

If you’re going to college, prepare for it now and don’t flunk the entrance exam. Ruth Baker. Get all you can out of life now because soon it will be too late. Pat Sparks. Don’t get Miss Wampler in English. Billy Hatton. Go to school every day and learn all you can. Wanda Collins. Have fun and study hard. Mary Craft. Never give up. Try and try until you succeed. Eugene Holbrook. Study hard, you won’t be sorry. Shirley Gilliam. Have fun while you’re young, you’re only young once. Wilma Mason. Don’t miss very much school. Walter Howard. Study, don’t get in debt, and keep out of trouble. Sue Cornett. Start when you are a freshman to do your best, to have the most fun, and don’t miss anything — life’s too short to be wasted. Barbara Pratt. Study hard. Act well your part; there all the honor lies. Cecilia Newsome. Have fun during your high school days. You only have them once. Gary Garrett. Keep your debts paid in your senior year. Sharon Bentley. Don’t be too lazy— just a little. Sandra Bloomer. Don’t quit school. Lester Boggs. Be good, study hard, and try to get Miss Lily Collins for an American history teacher. Freda Brock. Don’t take nothing from anyone. Ronald Necessary. Try to make passing grades even if you have to make D’s. That’s passing. Ronald Day. If you are going steady, stay as far away as possible from Mr. Ritter. Roger Collins. Don’t get caught. Frances Shelton. Live it up today because tomorrow may never come. Sue Trent. Have fun with every girl on the hill. Howard Couch. Have a good time. Randy Fields.

Monell Collins and Gay Amburgey were elected by their classmates to serve as the 1963-64 Whitesburg High School Ring Dance King and Queen.

Whitesburg’s Yellowjackets slashed their way to victory over the highly favored Belfry Pirates Saturday night before a small crowd, mostly of Belfry fans. The strong Jackets’ defense took the Pirates for losses on the first plays of the ballgame and then halfback Ronald Day let the Whitesburg offense to score in the first quarter and go ahead 7 to 0. Belfry scored in the second quarter to tie the game and so it remained through the halftime. Whitesburg took the kick off and though a series tackles, plays and a dazzling 65-yard touchdown by Day, the Jackets scored again. Attempt for the conversion failed and the Jackets led 13-7. Early in the fourth quarter Belfry scored their last touchdown and point after and went ahead 14- 13. With 3:31 left in the game, the Jackets made a spectacular drive through the length of the field and then Day scored again from the 18-yard line. The Jackets’ injured end, Michael Bentley, was ably replaced by Randy Fields, who did an excellent job on offense. Ty Hall led the Whitesburg defense with Yontz, Brown, York and Collins to control the Whitesburg defense interior line.

(The above articles from the 1963-64 Black Kats and the Yellowjacket Yearbook.)