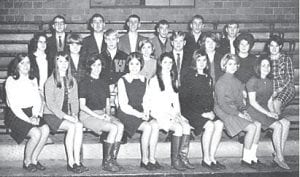 Mr. Frazier has four student teachers from Morehead State University. Mr. Robert A. Keathley from Martin in Floyd County and Mr. Dennis H. Phillips from Belfry in Pike County will teach from Feb. 5 to March 1 inclusive. Miss Joan Hale and Mrs. Raymond Madden, both from Redfox in Knott County, will teach from March 5 to March 29 inclusive.

The four will teach over a period of eight weeks, and will receive their degrees from Morehead in the spring.

Congratulations to Mr. Sparks, Mr. Hammock, Mr. Siegel, Mrs. Juanita Day, Miss Wampler, and the students for the outstanding program they sponsored for charity. The 1968 Telerama has been tagged a success, being the most enjoyable program presented this year. 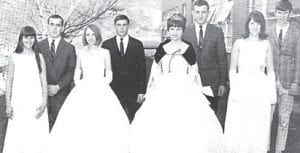 Congratulations to Miss Areatta Profitt, representative of WHS, who won first place in the speech contest held Feb. 22, 1968, at The First Baptist Church in Whitesburg. Other winners to be congratulated are Rosanna Collins, second place, and Ann Gish, third place winner.

Miss Olivia Maggard is to be congratulated for the wining theme on “Barriers of the Handicapped in My Community.”

Th e pants and shirts of the uniforms are cream colored and trimmed in black. The socks are black and have orange stripes. There will also be and undershirt with long black sleeves. The letters and numbers will be orange with the number on the back of the shirt and Whitesburg printed across the chest. 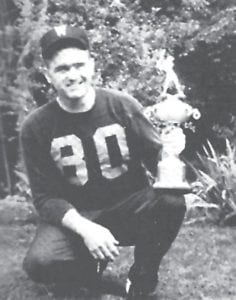 Three of Whitesburg’s distinguished senior football players went to Georgetown College for an interview for a football scholarship. These boys are Sam Frazier, Jeff Hunsucker, and Mike Burkich. Only one of these boys signed, and that was Mike Burkich. He is the first scholarship award winner in six years.

Miss Blair, the supervisor of the Whitesburg High School Cafeteria, has placed a limit on straws — one per student. The students have been taking straws and not using them for their intended purpose.

Remember the tin policeman who used to stand on the front porch of the high school building? He’s now standing tall on the porch of the Home Economics Department.

Rev. Franklin gives talk on alcohol and its effects

Jan. 28, 1968, the Rev. Mr. McCoy Franklin of the Presbyterian Church in Whitesburg delivered a speech to the students of Whitesburg High School on the subject of alcohol. His speech was very inspiring. The students seemed interested and possibly absorbed some of what Rev. Franklin said.

Baseball practice for this year’s baseball team will begin at the end of March. The pitchers will begin a few weeks earlier.

Last year’s team won a trophy by being runners-up in the district tournament. We are definitely out to improve that record by winning in our district.

Practice for WHS’s 1968 track team will begin the last of March. Coach Delano Thomas, who is expected to take over for B.K. Banks this year, is asking for financial as well as student support. In recent years there has been a lack of boys and a shortage of equipment and our track team needs both. So if you are interested in being on the track team, you should get in contact with Coach Thomas.

The Future Teachers of America held Teachers Appreciation Day on February 14. The club served the teachers soft drinks, cake and candy. We are sorry to hear that some teachers did not receive any refreshments . . . sorry about that!

While students of our large metropolitan areas will soon be facing the problems of a “long hot summer,” many students at WHS will be rejoicing. They have survived another winter in the FRAROESIER (chicken coop), the COLLBANK building (cannery) and the Garage (garage). It is a known fact around campus that during the winter months exceptions to the rules have occurred when the temperature rises about 30 degrees, a student complains of a stuffy room or warm feet. Our students never complain about the cold (no letters to the editor), neither do they work to change their classroom environment!

On Feb. 7th, Gardener Bates, health teacher and athletic director at WHS, was seriously injured when a tire he was fixing blew up on him. He was hospitalized and remained there for two weeks.

Mr. Bates is expected to be back teaching around the last of March. Mr. Bates tells us that he is doing fine and is impatient to begin teaching again.