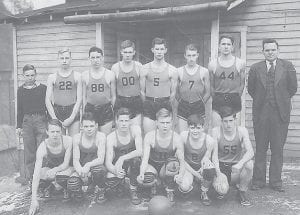 How would you like to be father to 1100 kids? That’s what Professor Millard Tolliver is eight hours a day, five days a week and nine months out of every year and he says he enjoys every minute of it.

Mr. Tolliver comes by his fatherhood as principal of the large Whitesburg school system and his job is to watch and care for all the thousand plus children on the school campus.

“They’re all good kids,” “and I love them each and every one, and as long as they are on this Campus I feel as they are my kids.”

The likeable professor has come a long way in Letcher County, the land of his birth, since the fall of 1934 when he came to Whitesburg as football and basketball coach after teaching two years at the Kingdom Come Settlement School.

He had come to the settlement as a teacher after receiving an A.B., with majors in history and education at Maryville College in Tennessee, a Presbyterian institution. 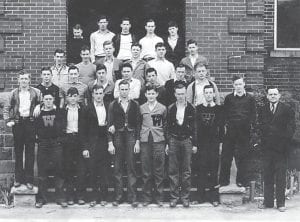 At Maryville, young Millard Tolliver, who had attended grade school at Democrat and graduated from high school at Buckhorn, proved to be an outstanding athlete as well as a good student. He played four years football for the college. The experience he gained in actual play was put to use at the Whitesburg School where Coach Tolliver’s team won 75 percent of their grid games and made Whitesburg a respected team in Big Sandy grid circles.

In fact, more was heard of Coach Tolliver’s football teams than of his cage squads, although the cagers won about 83 percent of their games under his reign. Whitesburg also journeyed to the state basketball tournament (for the first time) under Coach Tolliver’s leadership.

Whitesburg also journeyed to the state basketball tournament (for the first time) under Coach Tolliver’s leadership. That was in 1936 and a youngster named Ray Pigman was helping spark the Yellowjackets to the state tourney where they lost to Inez, 20-15, in a close game. Fifteen years later, Jimmy Bert Tolliver, the Professor’s son, was sparking a Yellowjacket team to the semi-finals of the state high school tournament in Lexington during the second appearance of Whitesburg’s name in a state tourney. That team was coached by the same Ray Pigman who played for Jimmy Bert’s father in Whitesburg’s first tourney bid. 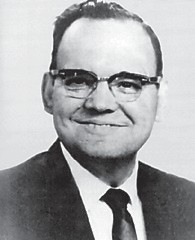 It seemed that young Jimmy Bert had always been destined for great things in the athletic world for a few hours after he was born at 3 o’clock the afternoon of January 25, 1935, a proud Coach Tolliver took his Yellowjacket cagers to Hazard and whipped the Bulldogs for the first win the Letcher Countians had ever scored against Hazard on the Perry Countians home floor.

Professor Tolliver left Whitesburg in 1941 after having held the position of coach, assistant principal and principal. He held the latter positions one year each. The “Coach” went to Evarts High School in Harlan County and proceeded to guide the Evarts football team to an undefeated season, marred only by one tie game.

From Evarts, the professor and his wife went to Cleveland, where they worked for two years before getting homesick and returning to Evarts in 1945. They remained at Evarts one year, where Mr. Tolliver taught and coached and then came back to Whitesburg in the fall of ’46. “And I have been here since,” the professor says.

We’ve been talking about Mr. Tolliver being a father to 1100 kids and almost ignored the most important woman and mother in the good professor’s life.

And Mrs. Tolliver, that charming and beautiful woman about whom we cannot speak enough words of praise, has been an important woman in the lives of many others with whom she has been associated during the years she has stood by her husband’s side in the great and important field of American education.

Although not a Kentuckian by birth, Mrs. Tolliver has literally grown up with the schools in Letcher County and eastern Kentucky. She first came to this county to fill a teaching vacancy in the Kingdom Come Settlement School. She came here from Maryville College, where she had gone to learn to be an education worker in the Presbyterian Church.

It can easily be surmised that lucky young Millard Tolliver met the future Mrs. Tolliver while both were in Maryville College. What surprised us was the fact that Millard met her the first night she was in town. He was a senior at the time.

Previous to attending Maryville College, Mrs. Tolliver had completed a music course at St. Louis University. She had attended high school in Grove City, Penn., where her parents had moved from Stuetenville, W.Va., Mrs. Tolliver’s birthplace.