More than 350 of Kentucky’s future leaders will participate in a “varsity sport of the mind,” this year, when “KET Scholastic Challenge” airs for Kentuckians. On Sunday, Nov. 18, the Whitesburg High School Team competed with teams from Belfry and Mayfield in this academic quiz show, which tests the proficiency of students in history, math, English, and science.

The KET Scholastic Challenge, now entering its third season, was developed by KET to help generate increased interest in education in Kentucky.

Producer Sally Jackson, who has been with the program since its inception, says, “It is extremely gratifying to see these bright, young Kentuckians who are bucking odds as far as Kentucky education statistics are concerned. Trends are changing in education and KET is thrilled to be a part of this!” 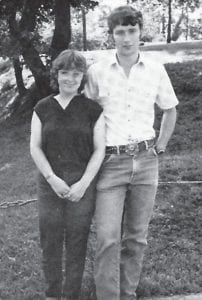 Each hour-long program consists of two games, with three high school teams competing per game. There are 116 schools participating this year. Each game will have five rounds of questions.

The winning team in the championship round will be awarded $500, and the runners-up will be $250 toward their school’s library fund.

Stacy Adams is the daughter of Bonnie Adams. She is presently enrolled in the Letcher County Area Vocational Center, under business and office courses. She has received the Outstanding Student Award from B&O. She has decided to attend Alice Lloyd College this coming fall.

Steve Dollarhide is the son of Jeanette Dollarhide and the late Jim Dollarhide. He is presently enrolled at the Letcher County Area Vocational Education Center. Steve has also decided to attend Alice Lloyd College.

’Temptations’ was a play presented by the Whitesburg Drama Class. This play dealt with the everyday temptations that teenagers face. Satan, represented by Tracy Frazier, was very convincing and “tempting.”

There were scenes that displayed normal (?) teenage behavior. One dealt with MTV and how too much TV can affect your mental stability. Another dealt with dating and how, as we all know, immaturity can ruin a relationship. The last dealt with teenage suicide, and how alarmingly true it is. Congratulations to Leslie Frazier for an outstanding performance.

The Drama Club did a fine job and we all hope to see more of them in the future.

Chris Fields has been chosen as the 1985 Mr. Whitesburg High School. Chris lives at Cowan and is the son of Nancy Fields. Chris’s activities include a part-time job and spending time with his friends. After graduation, he is considering attending Alice Lloyd College.

Bridgette Combs has been chosen as the 1985 Miss Whitesburg High School. She lives at Isom with her parents, Gene and Barbara Banks. She was Kentucky’s Miss Basketball this year. Her other activities include track and working with computers. She plans to attend Western Kentucky University and major in pre-law.

There were 28 teams from four states competing in the Invitational. Whitesburg was led by the dynamite duo of Deanna Boggs and Kim Fields. Boggs won the 1600 meters in a time of 5:31 while Fields placed third after a photo finish for second with Missouri State champ, Sherry Cox. Both Fields and Cox ran the mile in 5:36.

In the 800-meters race, Boggs held off Cox in another photo finish for first place. Both girls were clocked at 2:26. Tracy Romine was seventh of the 58 runners who participated and ran the event in a very good 2:37.

Marla Gentry, a member of the WHS girls’ basketball program, was ruled ineligible to play last month by the Kentucky High School Athletic Association because of alleged recruiting violations. The KHSAA stated that undue influence had been used to get Miss Gentry to participate in Whitesburg’s girls’ basketball program according to Warren East’s coach, Fred Carter, and Athletic Director Joe Watkins. The charges were denied by both Marla and Coach High.

That afternoon, after Judge Hogg issued the court order, Marla played in the WHS vs. Cawood game. The KHSAA quickly took action and suspended all Whitesburg athletic activities including boys’ and girls’ basketball, boys’ and girls’ track, football, baseball, and cross-country for a period not to exceed one year.

Following the KHSAA’s actions, Judge Hogg issued a restraining order and an injunction barring the association from enforcing its suspension. Hogg then threatened to jail association Commissioner Tom Mills for contempt of court. Mills agreed to let Marla play and was released.

Soon after the ruling of Judge Hogg, a three-judge panel of the Kentucky Court of Appeals ruled that Whitesburg High School Athletic Teams can play ball, but that Miss Gentry cannot.

The Lady Yellowjackets opened their season against Cawood at home this year. The Lady ‘Jackets came out ready to play and controlled the game from the start with their ferocious press and lightning fast-break, jumping out to a controlling lead thanks to an outstanding first half by Regina Holbrook. Coach High used this opportunity to play some of his less experienced players in the second quarter. In the second half Whitesburg rallied behind Bridgette Combs to run away with the game and ended with the score of 101 to 46.

What did some of our students and teachers do for ‘Summer Fun?’ Therman Begley went fishing. Kevin Huff, “I forgot.” Tina Reedy went to Florida, Myrtle Beach, and the swimming pool. Had a ‘REAL’ good time. Pam Nelson went to basketball camps, Kings Island, and swimming, also into trouble. Sandy Morris went to Texas and she and her friend Angie found biting ants that multiply in water. Jeff Holbrook mostly just lay around. Tim Little went to summer school. Missy Barker went to Myrtle Beach and spent time with Barry.

(The above articles from the 1984-85 Black Kats and the Yellowjacket yearbook.)