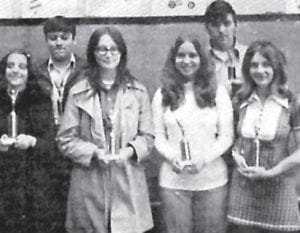 These students have earned the right to represent our school and region in the state contest to compete with winners from the other five regions across the state. The State Conference will be held in Louisville, March 8-10. 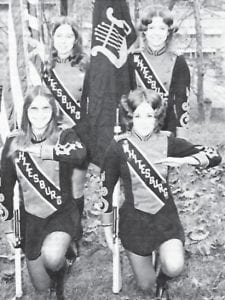 All was silent, as people waited for their names to be called out. Just outside the door all the seniors who already had their rings were saying, “Let me see yours!” and “That’s nice.”

This was the scene on Friday night Nov. 17, 1972. The senior Ring Dance had finally come. Lina Welch and Mark Caudill were crowned King and Queen by Mr. Horn. As the royalty danced the traditional waltz, Devil John provided the music. The seniors were happy and all in all, it was a great night.

Three Morehead State University students have spent the past eight weeks on the WHS campus as student teachers. They are: Miss Ricki Anderson with Mrs. Day’s art Classes, Mr. Randall Tackett with Mr. Frazier’s social studies classes, and Mr. Bill Stamper with Mr. Gose’s P.E. classes. The WHS students have enjoyed having them on our campus and hope they have enjoyed their stay. 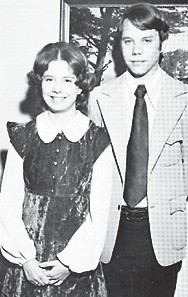 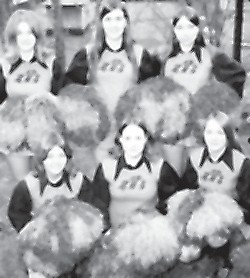 Mrs. Betty Horn, the exchange advisor at Whitesburg High School, in an effort to offer the exchange students an insight into the culture and environment of Kentucky, planned several activities including visits to the Pine Mountain Environmental Education Center, Cumberland Falls, The Little Shepherd Trail, coal mines, the horse races at Keeneland, and many others.

A new addition to the WHS coaching staff is assistant coach, Mr. William Wright. Mr. Wright, who is a graduate of WHS, participated in football all four years of high school, while gaining many honors. Mr. Wright twice made Honorable Mention All-State, twice EKMC, and served as team captain during the senior year.

Mr. Wright is now married to the former JoLinda Ruth Maggard, also a graduate of WHS. They have one daughter, Stephanie.

Besides coaching, Mr. Wright also teaches science. Apparently he is pleased with WHS, as he was overheard saying while attending a pep rally, “It’s good to be back!”

The B-team cheerleaders were selected recently by the student body. There were 16 girls who tried out and Felecia Sturgill, Leslie Mullins, Bridgette Pratt, Debbie Hansel, and Billie Fairchild were selected. Tammy Collins was chosen as alternate.

Mr. Paul Anderson is the new director of the WHS Marching Band. He also teaches music at Colson and Eolia elementary schools.

Mr. Anderson was born in Hamilton, Oh., attended Ross High School in his hometown. He then came to Kentucky and Morehead State University where he majored in music education. After graduation in the spring of 1972, he then began his career as band director at WHS.

When questioned about his opinion of the students at Whitesburg, Mr. Anderson simply replied that they were motivated rascals!

This year the Whitesburg Band has an added attraction, the Color Guard. The Flag Squad, Seniors Janet Smith and Lina Welch carry the American Flag and School Flag. Seniors Brenda Caudill and Darlene Caudill, the Rifle Corps, carry and twirl the army rifles. The purpose of the rifles is to protect the American flag. The purpose of the Color Guard is to add more color to the band.

The Color Guard spent one week on the campus of Middle Tennessee State University in preparation for home football games.

This is a first for WHS, so let’s all support them.

This year was the first time WHS has had pompom girls. We would like to send our congratulations to them for the fine performances they gave us during the 1972 football season.

(The above articles from 1972-73 Black Kats and the Yellowjacket yearbook.)