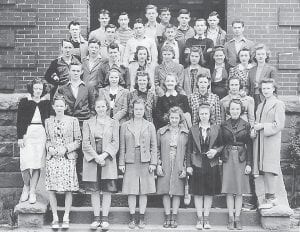 During the second semester, the Whitesburg High School Dramatic Club was organized under the sponsorship of Miss Cleo Stamper and Mrs. Don Brown. When the organization was announced about twenty students reported because of their interest in dramatics, and since, others have stated their desire to enter.

Although it has been impossible to give any plays for the public, at each meeting members of the Club give short skits and readings. Also, three one-act plays have been rehearsed and given before the club.

We are proud of the talent that has been displayed and next year, beginning early in the fall, a series of plays, which we hope will be very much enjoyed, will be given before the public.

The highest honors of Whitesburg High School will be awarded to Miss Florence Irene Hale, daughter of Mr. and Mrs. B. W. Hale, on graduation night, May 17, in the school auditorium, when she will deliver the Valedictory. 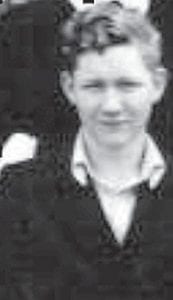 The award does not come as a surprise to Florence Hale. She has been an outstanding student since she entered the first grade twelve years ago, and each year she has ranked among the upper ten in scholastic standing.

Miss Hale is a most friendly and attractive girl well liked by all, and counts every schoolmate as her friend.

Although her activities, her schoolwork and social life have been full, she has found time to give to musical training and she is one of the best in the Music Department. She gave two piano numbers at the State Music Contest at Pineville this spring and her rating was high. She plans to specialize in music. She will enter college in the fall. 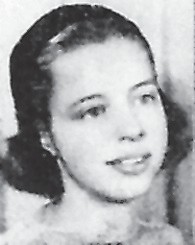 The Salutatorian of the class of 1940 is Finley Noble, of Sergent. This honor is given to the student having the second highest rating grades for the whole four years of high school work.

Finley Noble has been one of the outstanding leaders in his class during his four high school years. He was class president when in the sophomore year. He has been interested in 4-H work and is an active member of the Whitesburg Future Farmers.

At the beginning of this school year, Finley was elected president of the Science Club and has given good service in that capacity.

His many friends will be pleased to hear he has won this honor out of a class of 68 members.

The Whitesburg Future Farmers Chapter, after having been selected as the outstanding chapter in the Eastern Ky. District, was ranked third in the State Chapter Contest, it was announced Friday night at the annual Future Farmer Banquet held in the Kentucky Hotel ballroom.

The Chapter received as a reward for their placing third, a set of Trail Blazer series of books, awarded by the J. B. Lipincott and Company.

Other honors won at the convention in Louisville included first place on the Chapter Treasurer’s Book, kept by Jack Cornett, Chapter treasurer; first place in the Home Beautification Contest, won by Burnis Banks of Ice; and second place in the State Scrapbook contest.

Harry Caudill, secretary of the Whitesburg Chapter, was awarded the State Future Farmer degree at the convention. Harry is the first boy in Eastern Kentucky to receive this honor. The State Farmer degree is next to the highest honor that can be obtained in Future Farmer work. The highest honor is that of American Farmer. Harry also served as a member of the State Activity Committee at the Convention.

Days gone by while at

Sam Collins Jr. entertained a group of his friends Saturday night with a dance party.

Jack Swisher and Jimmy Dixon are nearing completion: a model airplane which has a wing span of 44 inches and flies for 45 minutes.

The band gave the Georgetown College Glee Club a tea directly after the concert on Wednesday night.

Seniors are beginning rehearsing on “Early to Bed- Early to Rise”, the senior play which is to be presented in about 3 weeks.

The following graduates of W.H.S. were in from College the past week, visiting their parents: Chad and Cuba Mullins, Shelby Adams, Astor Collins, Helen Craft, Irene Blair, Julie Ann Pugh and James Squires.

Herman Combs Jr. has taken a trip to Canada.

T.G. Lewis has left for Detroit, Mich., to enlist in the Air Corps.

The Dramatic Club is giving a formal dance on Saturday night, May 4, with a fee of 25 cents.

Note: I would like to recognize two members of this 1940 class who are well known in Letcher County: William ‘Bill’ Blair, who now lives at Hemphill, and Mrs. Eli Banks (Ruth Williams), who resides at Solomon, in Whitesburg.