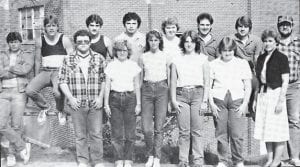 The most exciting moment for all upper classmen is the Junior-Senior Prom. This year’s prom was held at WHS’s cafeteria on May 18, 1984. The theme was “The Mardi Gras” and music was provided by Dave French and WIFX. Beth Luther, junior class president, gave the welcome, and the response was given by Randy Niece, senior class president. Randy presided over the ceremony and crowned Tim Smith and Annette Combs as the 1984 Prom King and Queen. Many thanks to the junior sponsors in creating the mystifying atmosphere that made this prom a total success.

As much as we all regret it, summer is over and Whitesburg High is back into the swing of things. It’s always interesting to hear how students spent their summer weeks away from books and teachers. We asked several students to look back on their fond memories of summer and recollect a few of the things that they did. 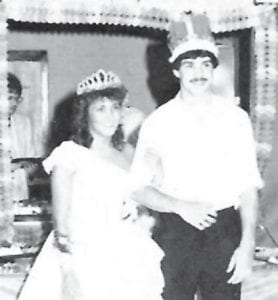 Miss Sergent: Spent every other weekend in Knoxville, Tenn. at Ted Russell Ford service department having her car repaired. She also went to Boone, North Carolina and played golf; Missy Halcomb: watched soap operas and slept late; Ellis Maggard, went to Florida with Betsy; Lacy Polly: I worked as a lifeguard at the Elkhorn Country Club and went to a Dance Olympus Clinic in July; Lou Eversole: slept, swam, fooled around, ran around, gossiped, etc.; Brian Cook: went to Myrtle Beach; Mary Page Polly: spent time with people I care about; Ingrid Imperial: spent five weeks attending the Governor’s Scholars Program; Scott Adams: played baseball, football, and went to the Smokies; Patty Morgan: spent the summer with the man she loves, Donald Fields; Missy Barker: went to Myrtle Beach and spent the rest of the summer with Barry; Darlene Hughes: went to Myrtle Beach and had fun; Billy Hall: made a fool of myself all summer long; Cheryl Mullins: I did absolutely nothing; Jenny Huff: I worked and spent a lot of time on Kingscreek; Kevin Boggs: went to Oklahoma and Cincinnati; Jeanne Craine: I tried to go to Pizza Hut all summer without Jimmy Jo Chatman being there. 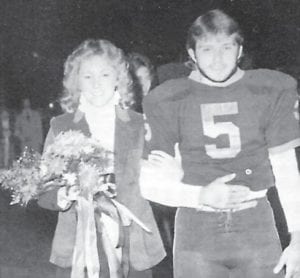 The 1983-84 school year was the beginning of a new tradition at Whitesburg High School with drama being added to the English Department curriculum. The first project this year was a Christmas play, “Santa’s Spectacles.” The class performed the play for several grade schools throughout the county.

The greatest achievement this year was “In Ya Blood”. The drama class received a one thousand dollar grant from the Kentucky Council for the writing and producing of “In Ya Blood”. The play is a stage adaption of the theme from a film made by Herb E. Smith in 1969 while a student at Whitesburg High School. The play explores the thoughts, decisions, and fears that students in the mountains of eastern Kentucky face when high school graduation approaches. The characters and personalities were developed by the entire class, as they discussed their conceptions of life in Letcher County.

The drama class is deeply indebted to Jeff Hawkins from Roadside Theatre whose devotion and inspiration made this year a success. We would also like to express our appreciation for the professional assistance and advice from the members of Roadside Theater.

In past years WHS’s Homecoming Parades have been among the finest in eastern Kentucky and this year is no exception. The parade ran through downtown Whitesburg on Oct. 21, 1983 at 1:30 p.m. The theme for this year’s parade was “Sing, Sing a Song.”

Talented bands and creative floats made this parade a pleasure to watch. Class float competition was tougher than ever with the juniors winning first place and the sophomores winning second place.

The sponsors for this year’s parade were Mrs. Connie Lester and Mrs. Sturgill.

The highlight of the day, the crowning of the queen, was held at the Whitesburg football field at 6:30 p.m.

1983 Homecoming Court and their escorts

This same evening at 7:30 p.m. the Yellowjackets did battle with the Somerset Briar Jumpers. The injured Yellowjacket team was defeated by a score of 65-8.

This year the Whitesburg High School campus has taken a new look. The old high school building was torn down several days before this school year began. This building was built in the early 1900’s. It served its purpose and held many memories. The gymnasium has had a new floor and a new ceiling installed. The band room has been rebuilt since the fire and has recently been repaired. JROTC is now being taught in the old band room, which has been remodeled. Although plans are being made in the hopes of having a new high school, nothing is definite.

Freedom Jam played at a school assembly on Sept. 2, 1983, in the gym. The group was from St. Petersburg, Florida. The group played present rock music, which was a big hit with the students of W.H.S.

Freedom Jam also held a concert in the gym, Tuesday night, September 6, 1983. This was also a great success. The overall reaction of the students was, “It was great!” We hope to have a return visit soon.

Benita Stanley: Giving as well as receiving; Ronnie Bowling: Goodwill towards men and Peace on Earth, and a lot of gifts; Jennifer Ison: Christmas parties, mistletoe, and of course the birth of Christ; Michael Jackson: No school, numerous parties, kissing under the mistletoe; Beulah Lewis: Parting with cousins that you don’t see for a year at a time; Tim Pennington: Not just getting a gift and opening an old box; Kim Looney: The gift of sharing your love with your relatives, love can be the best present of all; Jeanne Crain: Sharing the most wonderful gift of all, love. Laura Caudill: Spending time with your friends; Donna Gilbert : Noticing all the things the Lord has put before you and giving Him the credit; Patricia Holbrook: A time for loving, a time for sharing and a time for giving gifts to the ones you love. Glenna Huff: Special thing to me is when everybody puts the Christmas tree up together.

Auditions consisted of playing a piece of prepared music. Whitesburg band students were in competition with other students from bands all over the district.

Recommended for All- State were Greg Lucas and Rick Sparks.

On Dec. 3, the Whitesburg High School Band participated in the annual 1983 Jenkins Christmas Parade. The crowd was delighted with the band’s performance of “I Saw Mommy Kissing Santa Claus.” Also appearing in the Christmas Parade were the Fleming- Neon and Jenkins High School Marching Bands.

The next event the band was involved in took place on Dec. 13. The Whitesburg High School Marching Band traveled to Frankfort to participate in the Governor’s Inaugural Parade, in honor of Governor Martha Lane Collins.

All four county bands combined to form the All- County Band.

In order for the All- County Band to participate in the Inaugural Parade it was necessary to practice being one band. Practices were held at Jenkins High and West Whitesburg Elementary Schools.

Helping the band with their performance were the band directors from all county high schools. They were Paula Mobley of Neon, Homer Brown of Jenkins, John Bastolla of Letcher and Ronald Lester of Whitesburg.

The band did an exceptional well job working together as one unit.

Although the trip was long and tiresome, everyone seemed to enjoy themselves.