The gentleman lying down in the center of the picture is stone mason Frank Majority Sr. and seated next to him is his brother, Vincent Mongiardo. Vincent kept the family’s original spelling and is the grandfather of Daniel Mongiardo of Hazard. Frank Majority, Jr. of Whitesburg used his father’s shortened spelling of his name.

Prof. and Mrs. Paul Hounchell arrived here a few days ago and will make their future home here. Mr. Hounchell is principal of the County High School and Whitesburg Graded School. Mr. Hounchell comes to us highly recommended as a live educational wire and we feel highly elated over his election as the head of our school. Let everybody get ready for the school opening on next Monday.

In the 1917-1918 school year, Mr. Hounchell served as high school teacher and principal of the Whitesburg High School, and Ruth Davis was elected as high school teacher. The school term was set to begin Sept. 4. Prof. Hounchell remained in Whitesburg until 1919. During his term in 1917, the first three graduated upon his recommendation and received their diplomas. The students were G. Bennett Adams, J.L. Hayes, and John M. Bentley. 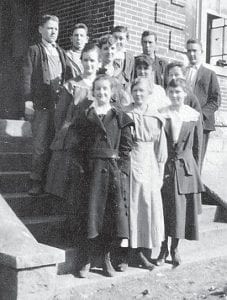 According to a newspaper clipping belonging to Beulah Caudill (class of 1925), Paul Hounchell would have been the first principal in the new school building in 1918. The stone foundation for the school had been laid prior to May 1914. A two-story brick building was constructed on the foundation on College Hill. The building was originally intended for high school classes alone, but the first classes were so small, they could be held in the two upstairs rooms. The graded classes met in four rooms on the first floor. The top floor contained a large stage and a 700-seat auditorium. This large auditorium with the stage was the center of many events.

The stone foundation for the new high school was laid prior to May 1914. The U.S. needed skilled workers, so they sent notices out to other countries. Italy had a lot of men without work, so some of them decided to come to the U.S. and some of them settled in Whitesburg. They mined ‘blue stone’ out of a quarry next to the school hill and cut and laid it by hand to form the foundation on which the school was built. 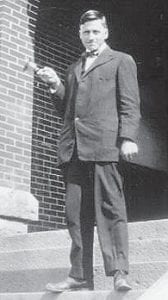 (The above article from information provided from research by Faith Armstrong Bowling.)

The schools of Whitesburg and Whitco resumed work on Monday of this week, after eleven weeks lost because of the flu epidemic. There were about 150 pupils in attendance at Whitesburg, and school starts off like we may make some progress toward regaining the lost ground.

For some time we will not attempt to have meetings of all the school together, in order to be a little safer from any flu danger, and because our auditorium cannot be heated in its unfi nished condition. Also, the hall is kept cleared and the rooms well ventilated.

The furnace is working again, after being rebuilt by contractor A.C. Brown. We hope it is going to give satisfaction at last, though we have had no weather that would really try it out yet.

The Friday night meetings will be left off for some time at least.

All the teachers are on the job in good working trim. Miss Williams has undergone a severe attack of flu in the time she has been at home, but the others have escaped.

Miss Messer is going ahead with her music pupils. It will take hard work to cover the year of work in the time left, but we will use every effort to that end. The hardest task will be on the high school pupils, as their course is build for nine months term, while the grades can finish their course in six or seven.

The Commencement Exercises of Whitesburg Graded and Letcher County High School opened Friday evening May 6 with a piano recital by the music class, each pupil performing with credit to self and the school. The instrumental program was followed with an operetta, “Midsummer Night’s Eve,” which was beautifully and artistically rendered in costume.

Monday night grades 1, 2 and 3 entertained with songs, recitations and marches, closing with a play called “The Golden Key” in which were represented many characters of storybook land, as Pied Piper, Cinderella, Red Riding Hood, etc.

Tuesday night came, 4th ,5th, 6th, and 7th grades opening with a chorus, “May in Here.” They gave recitations, dialogues and speeches and a hoop drill by 16 little girls dressed in white carrying pink and green hoops. This was a beautiful drill. The 6th and 7th grades entertained in an operetta “Moon Queen” in which the pupils each in beautiful costume represented the sun, sunbeams, moon, moonbeams, stars, breezes, raindrops, clouds, showers and the rainbow. The music was beautiful and high class. The 8th grade students carried colored streamers around five May poles, and then in a beautiful rush like little wood nymphs, they ran toward the school buildings and disappeared.

Friday night was the most important, the graduating exercises under the motto chosen by the graduates, Mr. Astor Hays and Miss Sabina Caudill, not the end but the beginning.

These exercises were interspersed with music by the music pupils of the high school.

These were the closing scenes of a wonderful year for Whitesburg.