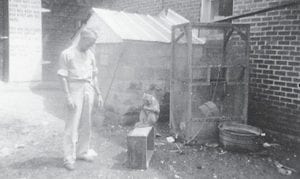 Pictured are Hubert Mosgrove and his pet monkey Jargo.

Note: I wish to express my appreciation to Debbie (Mosgrove) Hodson for writing this article from information provided by her father, Fernoy Mosgrove who now resides in Florida.

In previous articles, we looked at some of the popular hangouts for Whitesburg High School students during afterschool hours and on weekends. This article takes a look at three more of these that were operated by one family at Thornton.

Back in the day, the day of the 1940s, there were some thriving businesses located on Thornton Hill. These businesses, owned and operated by Hubert and Sadie Mosgrove, attracted many local folks as well as those traveling the road from Whitesburg to Jenkins. The original enterprise, known as the Toot ‘n Tell, opened in the early 1940s and was a very popular restaurant featuring Sadie’s good home cooking.

Things got rolling around 5 a.m. as she prepared breakfast for those on their way to work at the crack of dawn. Customers throughout the day enjoyed music from the old jukebox as they dined on meat loaf, chicken and dumplings and other fare from her menu. 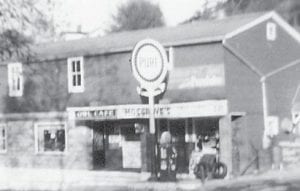 The Owl Café was a popular destination on Thornton Hill.

The Toot ‘n Tell, which closed after seven or eight years, was the prototype for a bigger and better thing, however — The Owl Café. The Owl Café, housed in a much larger building, was hardly a stone’s throw away from the first establishment, situated in a good spot for business, close to the highway. The Owl Café was one-stop shopping, indeed, and functioned as gas station, restaurant and grocery store.

Open seven days a week, owners Hubert and Sadie sold gasoline, cans of oil and even hay. Various canned goods, other grocery items and a selection of candies were available. There was a chopping block where rolls of bologna, pork chops and other meats were cut, then wrapped in white paper and handed to customers.

Hubert made regular trips to Knoxville, Tenn., and brought back all kinds of fresh produce to sell. Big hanging stalks of bananas were a common sight and a hit with customers. 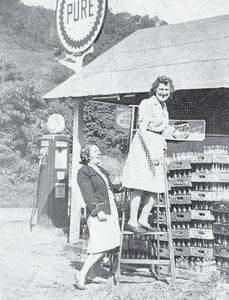 Sadie Mosgrove climbs a ladder at the Owl Café.

Speaking of being a ‘hit’ with customers. One of the biggest attractions of all was Jargo, Hubert’s pet Rhesus monkey, which he acquired on one of his Tennessee trips.

It’s said that Jargo would eat about anything, though we can assume he, too, ate his share of bananas. Hubert made a small cage for him and would sometimes bring him around on a chain to entertain customers. There were a few times Jargo got loose and caused a flurry of excitement until he could be located — usually up in some nearby trees. Jargo resided at the Owl Café for 10 or 12 years, until Hubert gave him away.

Inside the café were booths and tables as well as a few stools and a counter. Sadie, a wonderful cook whose hot dog chili became well known in the area, prepared most of the food. Business was so brisk, however, she also hired other women to help. Miners, telephone repairmen, salesmen and others coming and going from the towns of Fleming- Neon, Jenkins, Whitesburg and beyond could fill up with gas and grab a bite to eat. Hamburgers and hot dogs or ‘substantial grub’ of fried chicken, pork chops, green beans, cornbread and more sent them on their way with a full stomach.

Interestingly, movie showings were held in the upstairs of the Owl Café and, in those days, were quite an opportunity for local folks around Thornton and surrounding communities. A gentleman from the Millstone area, injured in the mines and no longer able to work, provided income for himself by obtaining and showing the films. The large rooms above the café supplied the space needed for an audience, allowing 30 to 40 people at a time to attend. Of course, they might have needed some gas or groceries or something to eat before watching the film. The Owl Café could supply that as well as the opportunity to watch the antics of Jargo.

If you are above a certain age and if you’ve lived in Letcher County most of your life and if someone mentions foot-long hot dogs and chili, you might remember Fernoy’s Drive-In on Thornton Hill. Fernoy’s, named for Hubert and Sadie Mosgrove’s son, Fernoy Webb Mosgrove, was located just across the road from their former businesses, the Toot n’ Tell and the Owl Café.

In its earliest form, the drive-in was actually a souvenir shop or ‘trading post’, which opened in the late 1940s. Hubert Mosgrove, ever the entrepreneur, converted an old bus into a roadside store which sold small goods and trinkets of all kinds.

In that era, the business sat beside a well-traveled thoroughfare and those curious enough to stop found a variety of interesting things. There were tiny snow globes, pennants and flags, a zoo of stuffed animals, wooden paddles and balls, packages of easy-to-assemble wooden airplanes, bags of marbles, souvenir ashtrays and glasses, pop and candy and too many other items to mention. In time, a new concrete block building was built in front of the bus and the bus was ‘retired’ to serve as inventory storage.

The new building became Fernoy’s Drive-In, replacing the former restaurants the Mosgroves operated at Thornton. Hubert, however, suffered a heart attack and died in 1958 at a relatively young age. Sadie was left to carry on the business along with Fernoy and those from the community whom she hired to help her.

Through the years, Sadie continued to please the palates of many Letcher Countians with her homecooked meals. Entrees of cubed steak, chicken and dumplings, T-bone steaks, pork chops, meat loaf and other fare, accompanied with sides of vegetables and rolls or cornbread, were served from the menu. An assortment of booths and tables inside allowed customers to enjoy their food with plenty of ‘elbow room.’

Customers didn’t have to dine inside, however. Many came to feast on the burgers and fries, soft-serve custard and milkshakes that were served inside and also from curbside via trays attached to car windows. Orders were taken by restaurant employees who ‘car-hopped’ from vehicle to vehicle, armed with green-colored order pads and pencils. Some folks ventured out of their cars and stood in line at the serving window to deliver their requests in person.

By far, however, the most popular items at the establishment were the foot-long hot dogs. Nestled in matching foot-long buns, they were a novelty item in those early days and Fernoy’s became known as the place to enjoy them. It wasn’t so much the unique-sized wieners and buns that gained a loyal following as much as it was Sadie’s flavorful hot dog chili. The chili was prepared from scratch using her own perfected recipe and was no doubt the real secret to the hot dogs’ popularity. The whole affair, after a good smothering with chili and onions (plus add-ons such as mustard or relish), was snugly wrapped in waxed paper and accompanied by several napkins upon delivery.

Before McDonald’s, before Wendy’s, before other fast food enterprises found their way into the mountains, small family run businesses such as Fernoy’s Drive- In successfully satisfied the appetites of those yearning for mouthwatering burgers or chilidrenched hot dogs.

Sadie Mosgrove, after many years of doing just that, died in the fall of 1977. With the advent of the newly rebuilt U.S. 119 between Whitesburg and Jenkins, a downturn in business became noticeable and, after a while, the decision was made to close the restaurant.

Even today, many years later, folks of a certain age still fondly recall waiting on an order of a foot-long hot dog with chili from Fernoy’s Drive-In on Thornton Hill. They say they’d love to experience that taste once again and a good number also mention they wouldn’t mind having the recipe for Sadie’s chili, either. Truth be told, they’d have to ask Sadie about that.