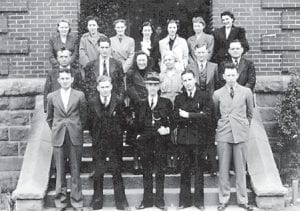 Our annual Halloween Carnival is to be held on Thursday, Oct. 27, at the grade school building. The P.T.A ladies have reported that they plan to have a much better carnival than last year’s.

The crowning of the King and Queen of the Carnival, chosen from the high school by the students, will be the main feature.

The juniors have worked hard every year to elect their Queen and so far they have succeeded. They are striving for the same purpose this year.

The juniors and the other classes will be grateful for any support from the people in town. 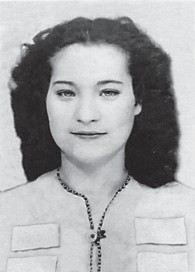 The annual Halloween Carnival at the Graded School Building was held this year on the Thursday night before Halloween under the direction of Mrs. Jerry Montgomery, chairman of a splendid committee, and the assistance of all teachers of the school, both high and graded. Financially, this was the most successful carnival yet held, and according to all reports, the most enjoyable as to fun and fright. The total receipts were $212.19, and the net profit $169.70.

A few of the highlights of the entertainment were popcorn balls, jam cake chances, Bingo game, wedding dresses of well known people, picture booth, grab bag, House of Horrors, Frankenstein, fortune teller, etc., followed by a short program and climaxing in the crowning of the King and Queen, chosen from the high school.

This year’s Queen was Miss Velma Sturgill of the junior class and the King was Mr. Walker Pigman of the freshman class. This has become an annual event of great interest in the high school and the money received there from goes into the high school library.

On Friday, Oct. 14, the High School Yellowjackets journeyed to Middlesboro where they played an exceptionally good game. The outstanding players on the W.H.S. team were Dewey Cornett, Ted Cook, Gene Moore and Walker Pigman. At the end of the game the score was 13-7 in favor of Middlesboro.

A few of the officers have not been elected.

The members of the Whitesburg High School agriculture classes are facing the busiest portion of their school year. In addition to their regular classroom work, they must get underway their projects for the year. The projects are perhaps the most important part of their work because in carrying these out, they gain actual experience, which will be very useful to them in years to come.

One of the projects planned by the Future Farmers to aid in beautifying the school grounds and the town is the planning of native shrubbery. Twentyfi ve or 30 dogwood, redbud, and maple already have been planted around the gymnasium. Later in the spring more shrubbery will be planted along the new street being constructed at the present time through the campus.

Within the next two weeks, the agriculture students will order co-operatively 2,000 baby chicks from the Kentucky Hatchery in Lexington for their broiler projects. These chicks will be shipped around the 20th of February. Brooder houses are now being built and remodeled. Their teacher is Mr. Jerry Montgomery.

(The above article from the January 5, 1939 Mountain Eagle.)

Last Thursday the Yellowjackets took a trip up in the northern part of the state. They played Grayson Thursday night and upset them to a score of 32-21. The boys reported that Grayson was the friendliest place they’ve been in a long time, they were treated in a very courteous way and I may say from my own experience that the people of Grayson take you into their homes and you’re treated as if you were a long lost relative. So go when Grayson comes over here, which they expect to do next year, we want to pay back some of the kindness that was shown us.

Friday night the Yellowjackets maneuvered themselves against Russell, and despite a rather long floor, they captured Russell by 28-26.

Saturday night the Yellowjackets turned over the boat that Prestonsburg was rowing in and won by a score of 20-16.

Other games were available for each person present to enjoy. Prizes were awarded to the highest scorers for dart throwing. This was for girls only. The winners were Janice Mullins and Katherine Black.

Other prizes were given to winners of Bingo and Chinese checkers. Both boys and girls were winners in these contests. The winners were: Colby Adams, Katherine Webb, Florence Hale, Eugene Fugate, James Banks and Nash Webb.

Each person had something to do and enjoy during the whole time of the party.

The party was a success and everyone enjoyed it very much.

Music was given by Bill Amburgey and David Kincer.

At the close of the party refreshments were served, which consisted of Old Time Fruit Punch and cookies.

Sam Collins Jr. entertained a group of his friends with a dinner Saturday, celebrating his 18th birthday.

Hugh Adams will present a Cantata at Fleming High School, Thursday, and at the Graded School Auditorium here on Friday.

It will be worth your time, high school boys, to see the picture, “Boys Town” at the Kentucky Theatre, Christmas Sunday. It is truly a great picture.