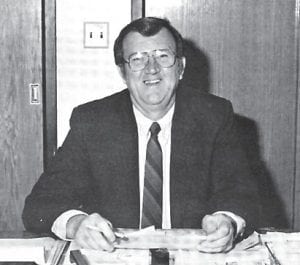 Whitesburg High School welcomes its new principal, Mr. Gene Horn. Mr. Horn graduated from Eastern Kentucky State University in 1958. After graduating, he started teaching and coaching boys’ basketball at Inez. In 1962 Mr. Horn moved to Whitesburg High School where he taught math and assisted in coaching boys’ basketball. He was assistant coach for about four years when he received the promotion to head coach. After coaching for about four years, he became assistant principal at WHS. Four years later he moved to the middle school and served as principal there for the past eleven years.

Mr. Horn stated, “I am here to help the students, the self-image of the student, and the attitude of Whitesburg High School.” So far he has done a fantastic job of doing just those things. He also stated that there is a greater challenge and a bigger responsibility for being principal of a high school. Most of the challenge comes from the number of students and the maturity between the two levels . 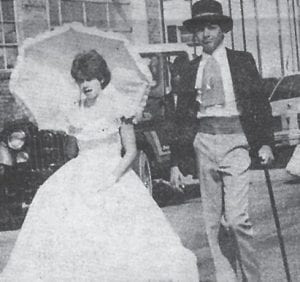 Sarah Hayes and Johnny Davidson as part of the freshman float.

One of our new teachers at Whitesburg High is Richard Marion Smith, who majored in art. He was a recent teacher at Letcher Grade School where he taught 8th grade. Mr. Smith went to several colleges — Pikeville, Eastern, Cumberland and Morehead — but graduated from Cumberland and got his master’s at Morehead. This is his 10th year of teaching.

Mr. Smith is married to the former Libby Day from Jeremiah. He is a Letcher County native. He says he enjoys traveling but as far as home goes, Letcher County is his home and always will be. He also enjoys baseball and archery. Archery is a big hobby in his life right now. Mr. Smith also coached girls’ softball for eight years at Letcher and enjoyed coaching. He said he applied for this job and is really enjoying working here. 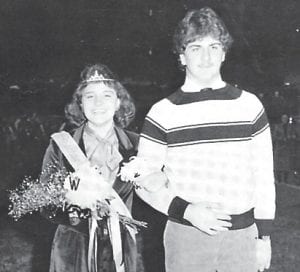 When Mr. Smith was asked had he enjoyed his first few weeks here, he replied, “The change is good for me and I have met over 300 new kids. I enjoy the kids I have in class — they are super. Also, the faculty has made me feel very welcome. All of them have offered to help in every way.”

Darrell Bell will be the new boys’ basketball coach at WHS this fall.

During his absence, he has coached at Wayne County and Cumberland College.

During his college career at Cumberland College, he belonged to the 1,000-point club.

Coach Bell has good expectations for the coming season and for the future.

Miss Chris Evans makes a fine new edition to the teaching staff here at Whitesburg High School. She is a general math and algebra teacher. By being a native of Pound, Va., Miss Evans feels that she is coming home by taking the teaching job at Whitesburg.

Miss Evans is not new to the teaching business. She previously held a teaching position at Washington County High School in Virginia. Before this, she taught pre-college courses at community colleges in Arkansas and Massachusetts.

Lorna Dixon, the new reading teacher at Whitesburg has been a resident of Letcher County for two years. She lived in Perry County for five years and lived the previous five years in South Texas. She is originally from Ohio.

This year’s homecoming started off with a bang. Nearly all of the students on the hill had at least a little Jacket pride. Everyone was hoping that we would win the homecoming game, but all were disappointed. Not only did the regular students attend the homecoming, but many graduates came in from nearby colleges just to watch it.

The homecoming festivities started off with Mr. Horn giving everyone an hour lunch. Then Mr. Horn got the “Jacket Pride” and kept the students out of both fourth and fifth period for a pep rally. Mr. Horn was even reported to be dancing.

Then the big moment arrived when Mr. Horn dismissed everyone for the parade. The parade was an excellent one this year with many floats. The seniors won the float competition in the parade.

We crowned Kaye Day as this year’s Homecoming Queen. Congratulations are in order for Kaye as well as the other participants of the ceremony.

Kaye is the daughter of Kelsey and Kathy Day of Cowan. She plans to become a diesel mechanics graduate from the Vocational School. Kaye would also like to attend truck driving school. Her escort, Randy Ingram, is the son of Mr. and Mrs. Claude Ingram of Linefork.

The music group, Free Fare, visited Whitesburg High on Aug. 26. There were six members in the band; however, the group wasn’t the only ones putting on the show. A few of the students and one of the faculty members also got into the act.

Frankie Eversole, junior; Scott Adams, senior; Elmo Morton, junior; and Mr. Jackson put on a play that would stir excitement in any combined parts of the heart.

This foursome combined parts of the movies Ghostbusters, Star Wars, Star Trek, Gremlins and Indiana Jones to form a comedy version which had the students roaring. These “actors” had assistance from the group’s lead singer.

This year WHS has adopted identification cards. These cards will be used to identify each student by numbers. The main purpose of these cards is to help determine in the cafeteria who has free, reduced, and pay lunches. They also will be used to get into ball games and dances. In the future years to come, they will be made with each student’s picture on it.

<b>In the season opener, the Whitesburg Yellowjackets were defeated by the visiting Laurel County Cardinals by a score of 36-7.

Whitesburg played tough the first half of the game, but Laurel County’s overpowering ground game was too much for the Jackets to handle.

Whitesburg’s only touchdown came from a pass by tailback Danny Benson to wide receiver Follace Fields, and Benson added the extra point.

Whitesburg was lead on defense by Charles Matthews, who had 13 tackles, and Durand Brooks had 11. Michael Jackson was in on 7 tackles and had a fumble recovery.

Tryouts for All-District Band were held Monday, Nov. 4, at Betsy Layne. The members of the Whitesburg Band, which made the All-District Band, were as follows: Will Buntin, Kristie Sexton, Tammy Maxie, Michelle Johnson, Sonja Watts and Lisa Whitaker.

Sonja Watts and Lisa Whitaker were recommended for All-State Band. They will go to Elizabethtown for auditions on Dec. 14.

A new project at Whitesburg High School is the student of the month, sponsored by the Academic Boosters, Inc. The Studentof the-Month is selected each month by the faculty and students. He or she musthaveaCaverageor better and must be of good character. The Students-ofthe Month for January were: Benjamin Miller, freshman; William Buntin, sophomore; Broy Dollarhide, junior; Srinivas Rao, senior. Pictures of the students are displayed in the window at the Cozy Corner. The February Students-of-the-Month are Denise Banks, freshman; Krisi Sexton, sophomore; Beth Richardson, junior; and Scott Adams, senior. The pictures for February are displayed in the window of the Mountain Comprehensive Health Care Office.

(The above articles from the 1985-86 Black Kats and the Yellowjacket Yearbook.)