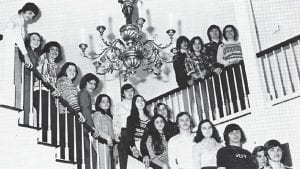 The seniors of 1976 patiently waited Thursday Night, Nov.6, 1975 as their rings were being given out by Mrs. Barker and Mrs. Ison.

The ring dance was open and the seniors could invite anyone as a guest. The band was Angels from Norton, Va.

About halfway through the ring dance, everything went serious as Rachel Breeding and James Gilley came to the table to escort Lisa Kimberlin and Allen Howard to where Mr. Burkich was standing and crowned them the 1975- 76 Ring Dance King and Queen!

Lisa is the daughter of Mr. and Mrs. Eckie Kimberlin of Cowan.

Allen is the son of Russell and Burnie Howard of Whitesburg.

Both are now attending the L.C.A.V.S.

The cafeteria was decorated in the “Spirit of 76” using, red, white, and blue candles and streamers. 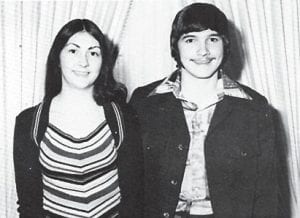 Darlene Mitchell, senior, to be a little more talkative. Roger Eldridge, senior, to be more kind and study harder. Nicky Hampton, junior, to listen to the short programs of 200 years ago today. David Jones, freshman, to make all A’s on my report card. Rhonda Caudill, freshman, I’m going be nicer to people. Tanis McLean, sophomore, forget the past and live today to its fullest. Debbie Sumpter, junior, to study harder in school. Ricky Morris, freshman, I give up washing my hair because it stays clean anyway. Mona Sue Banks, junior, to try to have more fun in life! Richard Hall, freshman, give up riding the bus and driving reckless. Johnny Lewis, freshman, I will stop going to 6th period. Machelle Osborne, freshman, I’m going to try to change my personality. Karen Sturgill, freshman, I’m not going to worry about the future, just the present. Nancy Maggard, junior, to be more honest with myself. Phillip Waller, to make everyone in my sight but a Black Kat! Danny Johnson, junior, not watch Johnny Carson on school nights. Kathy Banks, sophomore, to stop eating so much. Billie Gibson, senior, to be a better cook. Roger Maxie, sophomore, not to fail anything. William Joseph, sophomore, make every day count. Bonnie Mann, freshman, I have decided not to worry about my future, just worry about the present. 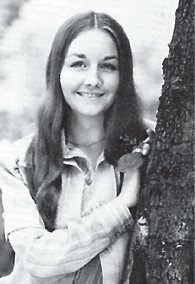 At the end of August, two representatives from each senior homeroom was selected to represent their class at the Senior Committee meetings.

The students had their first meeting on Sept. 9. They discussed the progress of the magazine drive and voted on every student going on the senior trip to sell at least $60 worth of magazines. 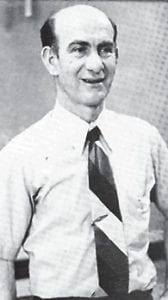 W.H.S. bids welcome to a new teacher! Jim Dollarhide! Mr. Dollarhide attended Morehead State University at which he received a major in both biology and history.

While at W.H.S. he will be teaching botany and zoology, general science, and biology. When asked his opinion of W.H.S. and its students, he replied, “Very good, extraordinary.”

Eula Eldridge selected among the 1976 edition of Who’s Who

Eula Eldridge was recently informed that she was to be included in the 1976 edition of Who’s Who Among Vocational and Technical Students in America.

Who’s Who Among Vocational and Technical Students in America is a prestigious honors program dedicated to recognizing vocational students on a national level for their outstanding local achievements and contributions to school and community.

Eula is the daughter of Mr. and Mrs. Dewey Eldridge of Roxana. She is a senior at Whitesburg High School. She was selected to serve on both junior and senior committees, to serve at the prom her sophomore year, she was a junior homecoming representative, she represented the Letcher Co. Voc. School as a junior clerk typist in the regional, she is on the student council, a member of the international Honorary Society for High School Journalist and an active member of the following clubs: Beta, Math, Pep, Fish and Tackle and the Photography Club, she is the president of the FBLA at vocational school and editor of her school newspaper, The Black Kat.

Eula plans to continue her education upon graduation from vocational school at L.M.U. or Hazard Community College. She plans to major in business education.

(The above article from the February 12, 1976 Letcher County Community Press.)

The Letcher County 4-H’ers let no moss grow under their feet this summer, they were a busy bunch.

Sherrie Breeding, a junior this year, participated in State 4-H Demonstrations. She was in the category of Girls – Electricity. She received a blue ribbon and is to be commended for an outstanding job.

Our officers have drawn up a work program, and the club has been hard at work on some of these projects.

We are looking forward to having a very active school year in DECA.

The junior class of W.H.S. recently voted on their class motto, colors, and flower for their senior year. The class motto chosen was, “One only finds happiness by following his own path.” The class colors were red and white. The class flower was a red rose.