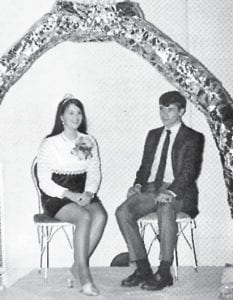 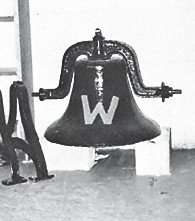 The Senior Ring Dance was held in the Whitesburg High School Cafeteria on Nov. 21. The dance began at 8 p.m. and lasted until 11 p.m.

The rings were given out by Mrs. Juanita Day and Mr. Dan Polly. The entertainment was provided by the group “Me and Six More” from Norton, Va. The girls’ attire was a mixture of pants formals, maxis, and minis.

The highlight of the evening was the crowning of the Ring Dance King and Queen by Mr. J.M. Burkich. Eddie Fields and Carolyn Holbrook were chosen. The band honored the King and Queen with a special waltz.

The Victory Bell erected by the Student Council stands for exactly what it says, Victory for W.H.S. The bell stands by the High School Building on the east side facing the English Building. Some of the Vocational School students helped the council build the frame which hold the bell.

The members of the council painted it black with an orange “W” on it. Boys from different classes helped to put the bell up.

It will ring whenever W.H.S. has a victory. The council hopes they will be allowed to ring it at the coming pep rallies also.

We hope we will hear it ringing for W.H.S. victories in the near future.

Note: The above article from the Dec. 1970 Black Kat. The bell was later moved to the front of the main entrance to the high school from the by-pass.

On Sunday, May 30, 1971 the baccalaureate service for the W.H.S. seniors was held at the First Baptist Church in Whitesburg. The service started at 8 p.m.

The processional was played by Teresa Baker and Theresa Sturgill.

The call to worship was by Mr. J.M. Burkich, the principal of W.H.S. The invocation was by Reverend Bill F. Mackey, the pastor of the First Baptist Church. The Whitesburg High chorus sang “I Shall Not Pass Again This Way.” The announcements were made by Mr. U.G. Horn. The Reverend Leon Wesley, pastor of the Methodist Church, delivered the sermon. Near the end of the service the W.H.S. chorus also sang “The Lord Bless You and Keep You.” The benediction was given by Reverend James C. Erwin, minister of the Graham Memorial Presbyterian Church. At the end of the service Miss Baker and Miss Sturgill played the Recessional.

This was a speech given by WHS, Jenkins, and Fleming-Neon High School students. Eddie won the local contest, and then proceeded to win the district, which was held at WTCW studios.

The contest, sponsored by the Veterans of Foreign Wars and their Ladies Auxiliary, featured a $10,000 first prize. Eddie, however, had to settle for $25 which was presented by Mr. Ed Moore, a teacher at W.H.S., and chairman of the board for this contest. Eddie lost in the regional, but winning the district was thrilling enough. Congratulations go to Eddie and his “coach,” speech teacher Mr. Carl Banks.

During the pep rally on Friday, Feb. 26, 1971, the W.H.S. athletes received their sweaters and jackets. They were presented to the boys by coaches James Gose and Darrell R. Bell.

All freshman, sophomore, and junior athletes who did not receive sweaters last year and lettered this year received their sweaters. The senior football boys who received jackets were Eddie Fields, Raymond McCool, Eddie Newell, Mike Wright and J.R. Brock. The only senior boy on the basketball team to receive a jacket was Doug Banks. Eddie Newell and Mike Wright were also recognized for making All- Conference.

Senior cheerleaders Susan Smith and Frances Wright were given jackets. Due to an unfortunate accident earlier in the year, Frances was not able to receive her jacket. It was received by her sister, Diane Wright.

(The above article from the March 1970 Black Kat.)