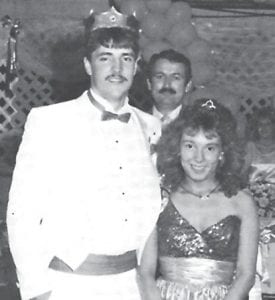 “Time of My Life” was an appropriate theme for the 1988 Junior/Senior Prom. It was a magical scene of pink, silver, and white, with dreamy balloon arches that were lighted like the stars. Gazebos added a mystical touch, and big floating hearts under which many couples danced the night away.

The junior class worked long and diligently to make this year’s prom one of the best ever. Will Bledsoe gave the welcome and Bill Collins responded. Mr. Treece crowned John Ray Thomas and Whitney Craft the 1988 Prom King and Queen. All in all, this night holds special memories to one and all, memories of love, laughter, and good times. Everyone truly had “The Time of Our Lives.”

Mr. Darrell Treece, Principal, was a former principal of Henry County High School, New Castle, and Powell High School. Mr. Treece tells us that he really enjoys the friendly cooperation that he has received from the faculty and student body. 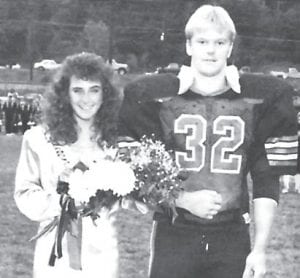 Mr. Treece also says that we will be allowed to have class tournaments and dances.

Mrs. Brenda Adams is one of our new counselors this year. She attended Alice Lloyd College for two years and graduated from Morehead State University with a bachelor’s degree in sociology and health and a master’s degree in recreation and counseling.

She is the wife of Rick Adams and the mother of Curtis and Monaka Venters. 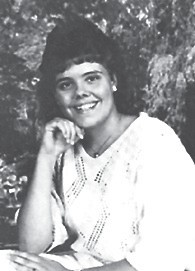 Mrs. Gail Roark is the new art teacher. She is married to Warren Roark and they live at Carcassonne. They have two children, Adam and Tami.

Mrs. Roark attended the University of Kentucky for a while leaving to raise her children. She later returned to Morehead to finish her education.

This is Mrs. Roark’s first year of teaching. She says that she has always loved art, and has always wanted to teach. She doesn’t expect all of her students to be great artists, she just wants them to do their best.

WHS welcomes back teacher/coach, Doug Chandler. He returns after a year of absence in 1986.

Mr. Chandler, who attended Morehead State University and majored in health and physical education, will be teaching the Alternative Education Program.

Miss Judy Mason is one of our new teachers. She says that she enjoys teaching here. She feels that the student body is very easy to get along with. Miss Mason is a graduate of Milligan University in Tennessee.

She has a husband and two children. Mrs. Black says that she likes counseling here at WHS.

Mrs. Dana Richardson is the new health teacher. She is married and has one daughter, Beth. She enjoys reading and sewing in her spare time.

Mrs. Richardson attended college at Pikeville and Morehead. She completed college in three years and returned to Whitesburg to begin her teaching career. She has been teaching for 23 years.

When asked if she could live her life over, would she still become a teacher, she said that she would. She said that there wasn’t a big chance of what she could do when she was in college, but she says she wouldn’t trade the experience she has gained through her work for anything else in the world.

Before coming to Whitesburg, he taught at M.C. Napier. Here at WHS, he teaches math classes such as Math I and Algebra II. Mr. Adams says he really enjoys teaching here at WHS.

Mr. Larry Jones is our new Vice-Principal. He was the principal of Beckham Bates Elementary School prior to this school year. He was previously employed at Hemphill Elementary School. He attended Morehead State University.

Miss Combs was escorted by Mark Wampler. Mark is the son of Mr. and Mrs. Eddie Wampler of Mayking and is planning to attend the University of Kentucky in the fall.

Amy Collier, daughter of Cleve and Kay Collier, is the 1988 Miss Yellowjacket. Amy received this honor because of her participation in school activities, natural sense of leadership, pleasantness of character, and outstanding academic achievements.

Amy had an active membership in the French, Math, Beta, and Quill and Scroll Clubs. Her leadership positions include being treasurer of the Beta Club and editor of the Black Kat.

Participating in English composition, language arts, and social studies, Amy’s academic achievement deserves outstanding recognition. Other prestigious honors are membership in the National Scholastic Achievement Society and Who’s Who Among High School Students. She ranks in the top 10 percent of her class, placed first in the Sweet Sixteen Journalism Competition, and was runner up in both the Letcher County Conservation Essay and the Mountain Heritage Essay.

On Oct. 26, the boys and girls basketball team sponsored a Donkey Basketball Tournament. Four teams rode in the tournament. They were the Beta Club (the Knee Squeezers) vs. the Band (Lester’s Tailtwisters) and the teachers (the Jack Aces) vs. the local businessmen (the Mule Skinners).

During intermission, trophies were given out. The most coveted award, Jackass of The Year, was awarded to Jimmy “The Mayor” Asher. Miss and Mr. Jackass were presented to Lisa Wilcox and Terry Hammonds. Phillip Hampton received Least Valuable Player award.

The most recent competition was the Roy T. Reasor Band Festival at Fleming Neon. The band again ranked a 1.

Sunday, Oct. 11, we had five band members picked during the All Festival tryouts. We would like to congratulate Michelle Johnson, Will Buntin, Cyndee Reynolds, Brian Pike, and Kristi Sexton.

Joel Webber won the Eastern Kentucky School Championship trophy. All four boys are eligible to participate as individuals in the state tournament at Bardstown, March 26.

(The above articles from the 1987-88 Black Kats and the Yellowjacket Yearbook.)