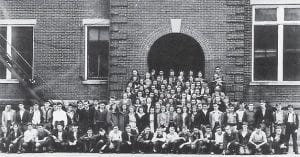 Plans for the annual Halloween Carnival sponsored and carried out by the Whitesburg High School are now going on. On Monday of this week, the classes met and chose candidates for the Carnival King and Queen. Students chosen for this honor were, from the senior class, Joan Lewis and Jack Cornett; junior class, Sybil Dawahare and Paul Pigman; sophomore class, Christine Lewis and Jack Little; and from the freshman class, Iva Lee Hall and Paul Taylor.

This article appeared in The Mountain Eagle Sept. 1941.

The Whitesburg Schools opened last week with a total enrollment of 981, one of the largest, if not the largest, in history. In spite of the scarcity, there was almost a full corps of teachers offering a wide range of subjects. Some of the weak parts of the buses continued to show up and transportation was hampered, but with efficient work from the various garages, these seem to be improved.

Jody Adams was at his post, teaching biology, football, and general business; Sanford Adams was in there helping and teaching science and algebra; Edgar Banks was found in the physics and chemistry laboratory with his usual skill and efficiency. Viola Cook was handling her English and French. Ann Dugan had her usual number of girls learning the art of homemaking; Delbert L. Estes had his group of boys gathered about him learning scientific farming. Mrs. Emma D. Hurst was found handling a strong course in health and physical geography for seniors; Isaac Hogg was found with a heavy load in geometry and general mathematics.

Bonnie Blair was well loaded with civics and American history and so was W. H. Poore. Leonard Stallard had almost a full load in bookkeeping but he found time to handle some world history and Journalism. Cleo Stamper was well loaded with junior and senior English, while Mrs. J.T. Sudduth handled about two hundred in freshman English. Mrs. Ann Vermillion was kept pretty busy with the library, schedule changing and filling in for absentee teachers. Ruth Edmiston started one hundred twenty odd on the road as typist and lined up about forty in shorthand.

In the absence of a band director, Jack Cornett agreed to take charge until he leaves for college.

The Grade School had an enrollment of three hundred eighty-one. Following are the names of teachers and the grade each teaches:

The Yellowjackets scored the first touchdown in the first quarter of the game. David Fields carried the ball for 55 yards.

The score at half was 6-0 in favor of Whitesburg. Starting in at the half, Whitesburg scored in the first three minutes, making the score 12-0.

The Yellowjackets have improved considerably and will be in good condition to meet the Benham Tigers Saturday, Sept. 20, at the Benham field.

The above article appeared in The Mountain Eagle Sept. 18, 1941.

The Fleming Pirates met and defeated the Whitesburg Yellow Jackets by a score of 12-7 in a thrilling battle Friday, Oct. 24, on Lewis Field.

The Pirates, outweighed by several pounds, were forced to come from behind to win, by scoring on a lateral pass, Allen to R. Richardson for the last and deciding score of the game. The Pirates got off to a 6-point lead, midway in the first quarter when Vertucca scored on a reverse from the ten-yard line. The Yellow Jackets went into a one point lead in the second quarter when Paul Little scored on a 26 yard run for a touchdown and D. Fields kicked the extra point and the Jackets led 7-6 at the end of the first half. The Pirates came back strong the last half, and by setting up a five man line on defense completely stopped the Yellow Jacket offense. A quick kick by Fleming set Whitesburg back deep on their own nine yard line, and a bad kick by the Jackets gave the Pirates the ball and the offensive on the Jackets 25- yard line, where they drove for the winning touchdown in the last quarter.

Whitesburg band members are proud of the fact that they won ratings of ‘Superior’ and ‘Excellent’ as well as ‘Good’ ratings at the Eastern Kentucky Musical Festival held at Pikeville College, March 27-28.

”Hail, Whitesburg High School, praise to thy name. On the rolling campus, We will work for thy fame. Glory and honor we will bring to thee. Thy name within our hearts, ever hallowed be. Whitesburg we shall miss you, through the coming years. Thoughts of thee within our hearts shall e’re be dear. Leading and guiding youth o’er all the land, Our Alma Mater! loyal, true and grand.

The words and music were composed by Mr. Bob Gatton and Rocky Davis.