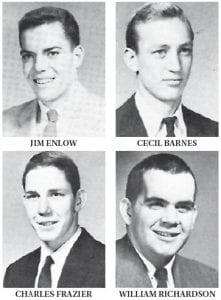 Jim Enlow: Jim has completed a wonderful season to climax his high school football career. This year he really became acquainted with football and proved that many times with his pass catching and defensive ability.

Cecil Barnes and Charles Frazier: These boys were late in beginning their high school football, but did prove that any boy, no matter who, if he works hard enough and sticks with it, can make the grade. Both Cecil and Charles really got started last spring and proved to the rest that they had a right to be on the first team — they were on our first team this year. Boys, you have left an impression with one of what a boy can do if he tries hard enough.

Tackles: William Richardson and Hobart Cupps: Thanks to you “Trim” and “Hobe” for your help in giving us a wonderful season — when we needed those gaps opened, you fellows did the job. Then the cheerleaders and fans were shouting “hold that line” you fellows held — thanks for coming through in the clutches. 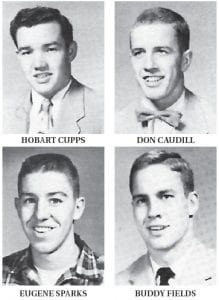 Guard: Don “Lightnin” Caudill — without pulling any punches, Readers, this is the greatest little guard that has ever left Whitesburg High or that I have ever seen in high school football, 130 pounds of destruction for the other team, a boy who never quits no matter what the odds. A boy as you know who always gets up smiling, yes “Lightnin”, it’s been a pleasure coaching you — your attitude and humor on and off the field has pulled the team out of many crises. Thanks.

Back: Eugene Sparks. Gene didn’t start too many games, but was always considered a first string man. A fine halfback who could always be depended on. Thanks, Gene, I’ll miss you — so will Hodge.

Burkie Holbrook. Burkie was one of the best quarterbacks I’ve ever coached, but of course I would never let him know that. It’s a big responsibility to run a football team when they are out there against tough opposition. That was Burkie’s job and he did a masterful job of it. His passing and ability to call the right play at the right time was remarkable. Burkie, it’s been a pleasure working with you. 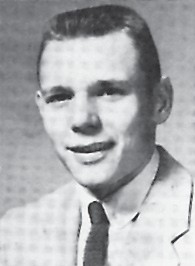 Buddy Fields: I have coached a lot of good backs in my life, but Buddy is by far the greatest. This year he scored 124 points which shows how hard he works. He not only works hard during games, but in practice as well, always putting all he got. This year he was our captain, always showing good judgment and wonderful leadership. He is a great competitor and would do anything in reason to prevent defeat. Every team we played dreaded Buddy, sometimes he was even a marked man, but still ran wild. There is no use for me to tell you about this boy. He has left his own story and records of his football days with every student, coach and fan in Eastern Kentucky. Thanks, Bud, for a wonderful job, all I can say is, “Well done.”

You were walking unconcernedly down the street when your name was called. Alfred Isaac then told you that you were to be in the Talent Show. Those were hectic weeks that followed. You practiced and practiced some more. Finally, the night arrived. First on the program were the Kentucky Mountaineers from Fleming, the leader of the group really had the rhythm in him. He was good. They received second prize. Janet Ison sang, “I Give My Heart to You.” The Jack Taylor Combo played “Basin Street Blues.” We received third prize. Last but not least was Jimmy Enlow singing “Ma, She’s Making Eyes at Me.” He won first prize. Whitesburg’s Liberace, Lovell Williams, gave a rendition of Tommy Dorsey’s “Boogie Woogie.”

The Future Homemakers of America took as their Christmas project “To Help the Needy Children.” All the girls have worked hard in planning and carrying out this project. Mr. Boggs and the WTCW radio station announced that we would visit all the homes to collect toys and articles of clothing. The students brought clothes and toys. We have quite a collection, which will be distributed. We would like to take this opportunity to thank the people who cooperated with us. We hope that we will have helped to make some children have a happier Christmas. The F.H.A. wishes one and all a merry Christmas and a happy New Year.

The Rotary Club program for December 14th was based on an International Theme with Christmas music. Esteva Collier of the 8th grade sang, “White Christmas.” Gloria Holstein played a piano solo by Bach; Kay Moore gave a lesson on French menus, followed by a duet, “La Marseilles” sung by Mr. Hugh Adams and Janet Ison. Roberto D’Avila from Stuart Robinson School sang “Silent Night” in Spanish; Mr. Adams sang it in German; while Donelda Breeding accompanied and Cecil Barnes hummed the air. It was very beautiful. The students were luncheon guest of the Rotary Club, at Sarah’s Tea Room.

On Tuesday night , Dec. 14, members of the Mixed Chorus entertained the P.T.A. with a beautiful Christmas carol, “And There Were Shepherds,” under the direction of Mr. Hugh Adams and Mrs. Jim Boyd. Mrs. Ruth Rice and Mrs. Paul Boggs gave Christmas skits and the Rhythm Band under the baton of Barbara Bentley gave four numbers including a beautiful Christmas ballet dance by Carol Joyce Davidson.

I’m not asking for anything, but please bring a certain girl a boyfriend so she will leave mine alone. Dorothy Cook. All I want is a new heart. I got mine broken.

Katherine Fields, Billy C. Fields. Please bring Billy Fields a wig for Christmas because Mr. Preston has pulled him bald-headed. Billy Maggard. The years have gone by and I have never asked for nothing much. This year I am asking for something which every boy once in his life gets up the courage to ask for, I hope I am mature enough to take on the task. I need lots of strength to pull and tug with it — what I want is a new razor. Jimmy Enlow. I have been a good girl this year and I’m just asking for two things: please bring me a twin then there’ll by two of me, and maybe I could do everything I have to do at W.H.S. Second: I want a tall, dark and handsome fellow who drives a green Cadillac. Initials are A.G.G. Miss Jenkins. We have been two good little boys, we would like to have a whistle and a little birdy — any kind of a bird — just so it is a “Thunderbird.” Wendell Meade and Donald Collier. As this is my last year in high school (I hope) I think you should be especially good to me. All I want is a little red-headed 8th grader, and a million dollars to buy a car so I can come down and see her every night. Your little good boy, Larry Craft.

Gossip on the hill

Rose Halcomb, are you aware of those interesting glances that Eugene Collier is throwing your way? Jimmy Jones, make up your mind. Will it be Lillian Fraley or Ann Brown? Charles Frazier seems to have a crush on Iva Lee Johnson. Isn’t that right, Charles? The Kat congratulates Claudette Lucas and Teddy Bentley on their engagement. Maurice Moore, don’t think the Kat didn’t see you walking up the stairs with Geneva Boggs and holding her hand. Ida Mae Stamper, you must really rate with someone, getting four letters in one day. Archie Hubbard, we see you in the gym courting at noon hour every day. You are not putting anything over on us. Hiram Whitaker, we hear you aren’t going to see Jean Boggs anymore, what happened? Wanda Stamper, the Kat would like to know who you’ve been writing to in the Army? New romances on the hill are Daryl Caudill and Pat Craft, Ken Moore and Ida Mae Breeding. We hear that Barbara Holstein is being true to her Marine, Sonny Holbrook.

(The above articles from the Dec. 1954 Black Kat and Yellowjacket Yearbook.)