The Whitesburg academic team has kept busy the whole month of January. They started off the month with a varsity loss to Neon on Jan. 5. However, the freshman and junior varsity squads picked up a win during the quick recall matches. In the written assessments, Elijah Fleming placed third in the math competition, and in the J.V. math, Robert Soto placed first, Joel Webber second, and Dan Brennan fourth. In the language arts competition, Velanne Welch placed third in the varsity and in the J.V. match, Dan Brennan and Neil Bedwell both tied for second. 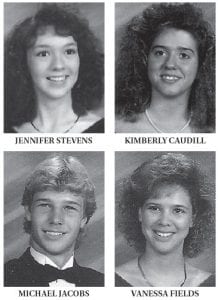 One week later, the academic team took on Letcher on Jan. 12. The freshman and J.V. teams picked up a win with the varsity taking a loss. In the English written competition, Elijah Fleming placed first and Rosa Halcomb took fourth and in the J.V. English, Dan Brenan received second, and Eleanor Abalos placed third.

Whitesburg High School held its graduation at 8 p.m. at the WHS football field on May 18, 1990. After Rev. Gary Fields gave the invocation, Salutatorian Kimberly Caudill gave her Welcome Address. Next, the WHS Chorus sang “We Must Say Goodbye.” Then the Valedictorian Jennifer Stephens gave her Senior Address. The presentation of diplomas was performed by Principal David Williams and the benediction was given by Rev. Lloyd G. Mullins, Jr.

The Valedictorian was Jennifer Stephens. She is the daughter of Brenda and B.J. Stephens. She has been a cheerleader, and a member of the French, Math, Beta, and Speech Clubs at Whitesburg High.

The Salutatorian was Kimberly Michelle Caudill. She is the daughter of Ames and Karen Caudill. Kim was the Student Council Vice- President, member of the tennis team, French Club, W-Club, and the Young Christian Athletes.

Senior Will (Part I)

I, Anne Caudill, will Ginger Craft my chewing gum, nail clippers, makeup, and all the other contents of my purse because you always borrow it. I, Dan Brennan, will Tommy Roark my ability to dip Skoal while playing the tuba. I, Ivan Whitaker, will Owen Gibson my ears so he will have something to remember me by. I, Edith Dickerson, will Sondra Stidham and April Webb my long fingernails and my clothes so they won’t have to borrow them anymore. I, Jennifer Short, will Laverna Akers my ability to miss school whenever I want. I, Tonya Newman, will Libby Trent my abilities to carry tales. I, Rebecca Craft, will Jason Kincer my ability to manipulate my parents into using their automobiles. I, Richard Roberts, will Mr. Jones my hair so his head doesn’t get sunburned. I, Lesley Ison, will Denny Breeding my courage to walk away and come out a winner. I, Amy Mullins, will Carla Stamper my ability to listen and know what’s going on. We, Jennifer Hart and Holly Fields, will our ability to talk, chew gum, and sing Metallica songs under our breath in Mrs. Hayes’s chorus class to anyone who joins chorus. I, Cristi Honeycutt, will my ability to keep my boyfriend over two months to my sister Carol. I, Jennifer Lucas, will my ability to have enough patience to stay with one guy more that a week to Dena Collins. I, Randall Sturgill, will my ability to get caught kissing in the hall to Melissa Parsons and Kevin Brown. I, Kim Gilbert, will my tolerance for band directors to April Hogg. I, Jennifer Taylor, will Angie Trent my ability to walk without looking like a duck. I, Angie Hatton, will Stephanie Taylor my ability to make Mrs. Barker break out in hives. I, Randall Sturgill, will my motorcycle to Norman Lewis in hope that he never gets stuck in waist deep mud. I, Fred Sizemore, will Scott Tillie my bicycle because the way he drives he will need it to go to the Senior Prom. I, Sharon Hatfield, will my ability to keep my eyes on my typing book while typing to Requa Fields.

The Harris Award is named in honor of Professor H. H. Harris, who served as Principal of Whitesburg High School from 1919 until 1927. It is awarded by the faculty to a senior boy on the basis of leadership, character, and scholastic standing. This year’s recipient is Michael Jacobs.

The Dugan Award is an award named in honor of Miss Ann Dugan, who served as the Home Economics teacher for 27 years at Whitesburg High School. The award was first presented in 1966 and is awarded by the faculty to a senior girl on the basis of character, scholastic standing and leadership ability. This year’s recipient is Vanessa Fields .

(The above articles from the 1989-90 Black Kats and the WHS Yearbook.)