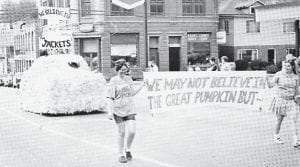 Homecoming 71-72: The theme of this year’s parade was “Comic Strips” and the floats, though not as many as last year, were so well built that the judge’s decision was very close.

There were also several Brownie Scout, Girl Scout, Cub Scout and Boy Scout troops in the parade, along with the kindergarten class costumed as various comic strip characters. The traditional bicycle and mini-bike cavalcade and several finely groomed and ornamented horses were also in the procession.

Coming in as first place in the float competition was the Tri-Hi-Y Club. This float was sponsored by the First Security Bank. This year is the second time in four years that the Tri-Hi-Y has placed first. Their float was ‘Peanuts,’ with Ann Tolliver as Schroeder, Vickie Prichard as Lucy and Lulu Collins as Charlie Brown. Greta Wesley, Kim Sexton, Kathy Newell, and Dianna Wright carried the signs. 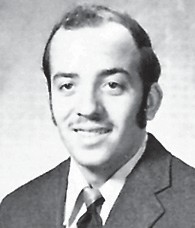 Second-place winner was the Beta Club float sponsored by the Bank of Whitesburg. The theme was ‘Family Circus Birthday Party.’

Third-place winner was the Folk Dance Club. The theme was ‘Lil’ Abner.’ Riding on this float, seated in front of the old log cabin, were Mark Caudill as Lil’ Abner and Lina Welch as Daisy Mae.

A slow drizzle had set in, and the bleachers were decked with improvised football- program hats, multi-colored umbrellas and ponchos. The crowd rose for the opening prayer led by Bill Mackey and the playing of the national anthem, by the WHS band. Their seat resumed, they listened impatiently to the announcement concerning the placement of the floats appearing in the parade earlier. The mild drizzle had increased until it reached the proportions of a full-fledged downpour. The participants in the traditional coronation ritual assembled. The band commenced, signifying the beginning of the ceremony. Uniformed athletes with streaming hair offered damp arms to brightly clad ladies, and to the strains of “The Look of Love” and rain drumming on inadequate umbrellas, the procession moved gingerly across the field. 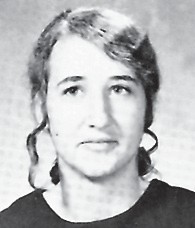 The freshman, sophomore, and junior representatives, Phyllis Ann Adams, Debby Lynn Hall, and Jennifer Maggard respectively, were publicly recognized. The senior contenders for the title, LeeAnna Collins, escorted by Gary Mullins; Nina Sturgill, attended by Tony Baker; and Gwenda Watts in step with Dwight Pigman, advanced and assumed their positions. The outgoing royalty, Miss Judy Frazier, garbed in the crown and train, and accompanied by Carl Breeding, brought up the rear.

The din lessened; the loudspeaker sputtered and amid scattered applause and camera flashes, Nina Sturgill was proclaimed Homecoming Queen, 1971.

On Friday, Oct. 15, there was a Homecoming Dance in the Whitesburg High School cafeteria. The dance began at 9:30 p.m., and lasted until midnight. 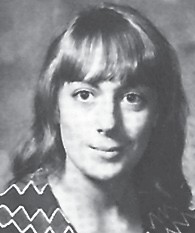 The band that played was Apple, a band from Fleming- Neon. The dance was sponsored and chaperoned by the W.H.S. band members and their parents.

A fund-raising effort in the guise of the Senior Fall Festival was staged in the auditorium last Tuesday morning. The production entitled “This is the Best We Have” featured a number of variety acts with the emphasis on music and included selections by the chorus, band, “The Funky Mothers” and other presentations by a sprinkling of interested students. With the addition of the proceeds from the night performance, the sum total neared $850, all of which will be applied toward the senior trip next spring.

The Age of Aquarius has come to WHS in the form of this year’s Jr. Sr. Prom held Saturday night, May 20. Decorations, including a fountain and astrological signs, surrounded the happy dancers as they swirled to the music of “Devil John”.

Afterwards, many of the participants made the rounds of the various parties in the area. The tradition of staying up all prom night was carried out in style as could be seen by the sleepy faces of the seniors Sunday night at the Baccalaureate Services.

Johnny Adams wills his ability to leave the hill early during fourth period and not get caught to Roland Craft and hope he doesn’t get caught. Judy Ann Adams would like to will some of her and Jim’s happiness and love to Lagena Sturgill and Claude Hicks. Kim Adams wills her ability to keep Mrs. Webber in a frenzy to Geoffrey Hensley. Ricky Adams wills his manager position to anyone who will have it. Good luck, you’ll need it. Linda Addington wills her ability to go with one boy for a complete year to Kathy Adams and wills her personality to Gladys Holbrook. Bobby Anderson wills all the shaving cream that was piled on his face on the senior trip to Vicki Bates. Maguana Blair wills her ability to get along with Darlene for four years to Wilmer Cook. Randy Breeding wills his first-place math trophy to Mitzi Mayes. (He knew she’d finally get one.) Freda Brown wills her purse and all of its goodies to Patricia Maggard, her brains (the ones left over after she leaves for college) to Emma Fields Wacks, and her homeroom to her brother who is entering high school next year. Estella Buttrey wills her great driving ability to Bradley Breeding, Mitzi Mayes, and Cordelia Palumbo in hopes that they will try being more careful on the highways than they are on the highways of Isom, Letcher, and Whitesburg. Look out for those fences, Cordelia. Donna Childers wills her ability to do splits to Mary Martin in hopes she will take advantage of it before 1973. Lee Anna Collins wills her Ring Dance crown along with her cooking ability to Mrs. Cordelia Palumbo in hope that she can crown her King with some extra weight. Ricky Collins wills his ability to make good judgment in speech to Jack Mercer so that next year maybe he will be converted to pure republicanism. Terri Cook wills her job at Dawahare’s to her sister, Jerri Cook, in hopes that she will keep up the good work. James Craft wills his smashing personality toward girls to Archie Noble. To the only surviving second-section flute player, Caron Crawford wills (1) all her shocking blue eye shadow, (2) her purple tennis shoes, (3) and all of her flute playing “ability.” Janet Fields wills her ability to pass Miss Whitaker’s test to Brenda Caudill. Sarah Gish wills her ability to stay slim to Jeanie Ingram. Barbara Ison wills her ability to kill a pint of screwdriver to Cathy Frazier. Joan Ramsey wills all her fun from the past four years to her brother, Johnnie Pat Ramsey.

“French fried or mashed?” ‘I can’t act, I’m hopeless!” “I’m a crank!” “ Very good inspector.” “Naturally!” Have you heard any of these lines lately? If your answer is yes, then you were most assuredly present at the annual senior class play, performed on Tuesday, March 28 in the Whitesburg Grade School auditorium. However, if your answer is no, then you missed two of the best murder mysteries of the century.

One of the new student teachers for Mr. Frazier is Mr. Bill Farley. He is from M.S.U. and majoring in history. Mr. Farley is from Jenkins and plans to teach in Florida after graduation.

(The above articles from 1972 Black Kats and the Yellowjacket yearbook.)