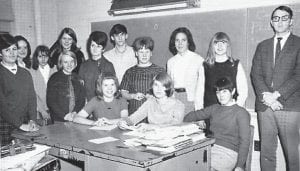 For review, the following is from the 1962 Black Kat, announcing the beginning of this magazine:

This will be one that will inspire creative writing; it will be an honor to have your work appear in it. The title of the booklet is “Lit, Wit and Logic”. The name was suggested by Delma Gilley, Class of 1962, who received $5 for her suggestion. 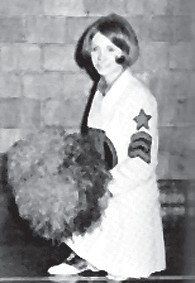 Tuesday, Dec. 17, the students of WHS were favored with a visit from the high school workers from Scripture Memory Mountain Mission, located at Emmalena. Mr. Dennis Cline, along with two other workers from Camp Nathaniel, presented a Christmas program during third period. The program was centered around the visit of the Wise Men to Jesus.

The Whitesburg High School Band will sponsor a dance to be held on Valentine’s Day. The dance will be held in the cafeteria at 8 p.m. on Feb. 14. Music will be furnished by “Summer Reign” of Whitesburg.

Proceeds from the dance will go toward the purchase of new music stands. Everyone is asked to come out and support the band while having a good time. 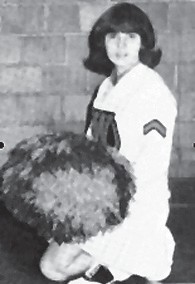 The VFW, HI-Y, and Tri- Hi-Y have combined efforts to support a spaghetti dinner to raise funds for the March of Dimes. This spaghetti dinner is scheduled to be held at the Whitesburg VFW. Post on Feb. 22, from 5 p.m. to 8 p.m.

The Hi-Y and Tri-Hi-Y Clubs will be selling advance tickets to the dinner. Adult tickets will cost $1; children under 12 will be admitted at the door for 50¢.

Mable Faye Bentley, a senior is now in her third year as cheerleader. Being 5’5”, she likes to read, dance, swim, and eat pizza. Mable is a member of the Beta Club, French Club, Bible Club, Nurses Club and Pep Club. She enjoys being a cheerleader because she likes to support the team and cheer them on to victory. Her future plans are to become a secretary.

Donna Martin is a 5’4” senior experiencing her first year as a cheerleader. In her spare time, she likes to read, listen to music, and eat her favorite food, pizza. She belongs the Bible Club, FBLA, Speech Club, Pep Club, and the Senior Committee. When asked why she wants to be a cheerleader, Donna said, “To fully support the team and the Whitesburg Athletic Department.” She plans to further her education at Williamsburg. 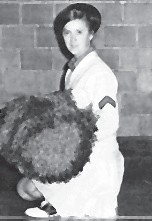 Alice Faye Thomas is a senior standing 5’4”. Her favorite pastime is listening to music, swimming, and eating macaroni and cheese. She belongs to the Library Club, FTA, Speech Club, and the Pep Club. Alice wants to be a cheerleader in order to support the team. Her present plans are to continue the business course at the vocational school.

Sandra Kaye Banks is a peppy junior standing 5’4”, serving her second year as a cheerleader. Her favorite pastime is learning new stunts in gymnastics. Sandra is a member of the Nurses Club, Bible Club, and Pep Club. Her favorite foods are hamburgers, French fries, and pizza. When asked why she wants to be a cheerleader, she replied, “First of all I think it is a great honor, second I like the physical aspects of it. I like to think that I am helping my school and the team by trying to cheer the boys on to victory.” Her future ambition is to attend beautician school or go to Morehead State University.

Becky Collins is a junior and is in her third year as a cheerleader. She stands 5’3”. She belongs to the Tri-Hi-Y, FHA, Bible Club, Nurses Club, and Pep Club. Her favorite food is hot dogs with potato salad, and she devotes her spare time to Glenn Trent. Becky says she wants to be a cheerleader because she has wanted to be one all of her life and she enjoys supporting the team. Her future ambition is to become Mrs. Glenn Trent and support him when he coaches basketball.

On Jan. 24, the Hi-Y Club sponsored a dance, which the club hopes to make an annual affair. The dance was held in the cafeteria. The chaperones were Mr. Burkich, the principal; Mr. R. T. Holbrook, the club sponsor; Mr. Burtis Webb; Miss Mary Lou Lindsey; and Mrs. Steve Lucas. 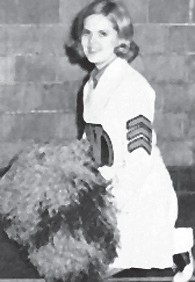 The music was furnished by “Summer Reign” of Whitesburg.

Approximately 150 people attended this dance. Everyone feels that this dance was very successful and we hope that there will be many more such dances in the future.

The Whitesburg High School Athletic Banquet was held in the high school cafeteria on Saturday, May 3, 1969. During the banquet there were several different speakers from our school, but the main speaker was Mr. Roy Kid, Coach of Eastern Kentucky University. All the athletes were recognized and there were three trophies given away, one to Joe Hunsucker for football and the others to Larry Tolliver and Jay Fields for basketball. The cheerleaders were also recognized because they, too, worked hard this year, by rooting for our team in both defeat and victory.

The Banquet was enjoyed by everyone, because there was good food and also good music, which was provided by ‘Something Else.’

During the last six weeks the W-Club sponsored the annual class tournament. The first game brought victory to the senior class, as they defeated the juniors. The next game between the sophomores and freshmen turned out to be a freshman win. Next the seniors met the freshmen and again seniors found success. But the finals, featuring the teachers versus the seniors brought an end to the senior wins as they were defeated 31-28.