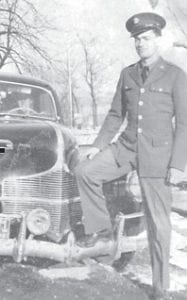 Seven days after Pearl Harbor, he volunteered his services for his country. He was soon entered into a training school. He trained many new men to be soldiers. Some of these were of national fame. His advancements were rapid. He was truly talented in training men and was a key man for the government in this work. He died of an enlarged heart on Feb. 25.

He had many friends in service, and many here in Whitesburg. He was a very efficient worker.

“Mrs. Laura Sturgill, Whitesburg, Ky. Your son, Sergeant William K. Sturgill, who had been confined in the Station Hospital at this Post, died at 7:55 p.m. Feb. 25, 1943, from acute dilation of the heart and bronchial pneumonia.

“You have the deepest sympathy of the officers and men of this command in your bereavement. Sergeant Sturgill was held in high regard by all members of this command. He was a splendid soldier, and an outstanding character. His loss will be deeply felt by his friends. You may rest assured that everything possible was done for his recovery.

“I wish to express my own personal sympathy in your loss. Please feel free to call upon me for any additional information you may desire. Yours most sincerely, Converse R. Lewis, Colonel, Air Corps, Commanding.”

Commencement exercises were held Friday night at the high school for the largest class of seniors to ever graduate from Whitesburg High School. Sixtynine students completed their high school studies at this time.

The Baccalaureate Services were held at the Baptist Church last Sunday at which Rev. L. O. Griffith delivered the message to the class and a large congregation.

The junior class, with the aid of its sponsors, Miss Webb, Miss Cook and Mr. Montgomery, gave the senior class and faculty members of Whitesburg High School a delicious banquet in the social room of the Presbyterian Church, Saturday night, May 14, 1938.

Place cards were laid for 130, who attended and were all finally located when the fun began. The tables were decorated in the high school colors, which added materially to the wellplanned banquet.

The toastmaster, William Fred Gibson, was at his best in introducing the speakers. Bill Kincer made the welcoming address for the junior class and Verdell Bach, president of the senior class, responded.

After an evening spent in merriment, “Auld Lang Syne” was sung by all and the banquet was over.

The banquet was prepared and served by the Woman’s Auxiliary of the church.

The 56th District Tournament was played in the Whitesburg Gymnasium, Thursday, Friday and Saturday nights, March 3, 4, and 5.

Friday night, Whitesburg played Jenkins and won in a close game by the score of 20-19. These two close and exciting games were attended by the largest crowds that have ever attended any basketball game in the Whitesburg Gymnasium.

The basketball boys were each given the privilege of inviting a high school girl to accompany them and they were escorted by some ardent basketball supporter, their meal being paid for by him.

This was followed by a splendid speech by Coach Ed Diddle of Western Kentucky Teachers College, who was also an honored guest.

Tuesday Night, November 23, a banquet was served at the Presbyterian Church to the football team and 85 guest of Whitesburg High School, by the Ladies Auxiliary of the church.

The banquet tables were attractively decorated in the colors of the school, black and gold. Vases of flowers and the athletic trophies added further to the beauty of the tables. The large black and gold silk flag bearing the initials “WHS,” a valued gift to the school, hung directly behind the toastmaster

The guests of the evening were the football team and coaches. These were taken and the plates paid for by some lover of the game and but for them the banquet would have been impossible.

The turkey dinner was thoroughly enjoyed by everyone present. Professor R. Dean Squires acted as toastmaster, calling upon each one to present his or her guest for the evening.

Mrs. Mies Moore and Mrs. R. Dean Squires sang “Sylvia”, which was followed by a piano solo by Mrs. Albert Jones. Also several piano numbers were given by Mr. Walter Kries. These numbers were interspersed by many songs by the entire group.

A fine and happy spirit prevailed throughout the entire banquet and when “Auld Lange Syne” was sung at the close of the evening, each one voiced the sentiment “This has been one of the best banquets we have ever attended.”

The memory and motive of such a meeting will no doubt linger long in the memories of not only the football boys but of all who were guests for the evening.

The new 10-room addition to the graded school building is rapidly nearing completion. The work is being done entirely with W.P.A. labor. A. C. Brown, superintendent of construction, informs the Eagle that the new rooms are expected to be ready for occupancy by the first of the month. The addition of ten rooms will take care of a badly overcrowded condition at the local school. Factory type windows have been installed, ensuring plenty of daylight to the classrooms. The floors have been laid and just a few finishing touches remain before the kiddies of our city will be studying the three “R’s” in brand new classrooms.