Our new Homecoming Queen for 1978 is Miss Donna Joseph. She was crowned Friday night at the football game against Cumberland.

The 1977-78 Homecoming Queen, Kathy Collins, was escorted by Randy Cook. 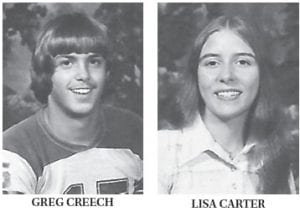 Parade enjoyed by all

Our own WHS marching band participated, along with the Letcher High marching band. The homecoming queen candidates, honor court, and the class representatives were led by the 1977-78 homecoming queen, the lovely Kathy Collins, who is a freshman at U.K. this year. The WHS cheerleading squad infiltrated the crowd with pep for the Cumberland football game as they were driven through town by Doug Bird. 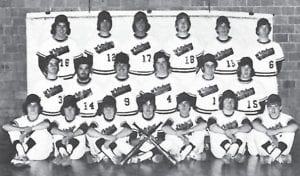 The 1979 Whitesburg High School baseball team had a record of 11-12 for the season.

Although this year’s parade was not one of the best, it was thoroughly enjoyed by the spectators who lined Main Street and especially by those who were involved in some aspect of the festivities.

On Homecoming night in Whitesburg, James Gose and his mighty Jackets enjoyed defeating the Cumberland Redskins for the first time since 1967.

Bill Witt, again, started off the scoring with a 55- yard run from scrimmage for the TD. Chuck Blair followed with the PAT. Later in the same quarter, Cumberland quarterback, Jackie Cornett scored on a one-yard QB sneak. William Marshall kicked the PAT to make the score 13-7. Only seconds before halftime, William Gibson ran a 49 yard TD to make the halftime score 19-7. Early in the 4th quarter, Bill Adams ran a TD. Later in the game, Erbie Pratt ran a TD from one yard out and Chuck Blair kicked the PAT .

The Harris Award was named in honor of Professor H. H. Harris, who served as Principal of Whitesburg High School from 1919 until 1927. It is awarded by the faculty to a senior boy on the basis of leadership, character, and scholastic standing. This year’s recipient is Greg Creech.

The Dugan Award is an award named in honor of Miss Ann Dugan, who served as the Home Economics teacher for 27 years at Whitesburg High School. The award was first presented in 1966 and is awarded to a senior girl by the faculty on the basis of character, scholastic standing and leadership ability. This year’s recipient is Lisa Carter.

The annual senior magazine drive, which finances a good portion of the senior trip, is completed. It lasted approximately four weeks and brought in a grand total of $12,148. 06. This is around $300 less than last year’s smaller senior class made, indicating that they were either more energetic than this year’s seniors or they had richer parents.

Roe’s Report: The ’79 Whitesburg baseball team had a good season of 11 wins and 12 losses, considering the team was young and inexperienced. Our senior players, Combs, Creech, and Hampton, provided the necessary leadership to develop a competitive winning spirit in each player. I’m sure that each team member will have fond memories of their accomplishments for years.

The Whitesburg High School Yellowjackets defeated the Hazard Bulldogs on the WHS field on October 13, 1978 to capture the District 1 title. The final score was a fairly decisive 14-6.

To begin the war, Bill Adams ran 52 yards down the sideline for a TD. Chuck Blair followed with the PAT to make the score 7-0. This was the only scoring in the first quarter. In the last seconds of the first half, William Gibson broke loose and sprinted 55 yards for the TD. Chuck Blair again kicked the PAT. Whitesburg led at the half, 14-0.

Hazard’s only score came when Kevin Blanton, a former Whitesburg resident, ran a field goal attempt back 99 yards for a TD. Blanton’s run caught everyone by surprise and the Jackets just stood and watched. Hazard came dangerously close to scoring again with only seconds to go in the game, but the Jacket defense held tight.

The win left WHS undefeated in the district at 3-0, and 5-4 on the season.