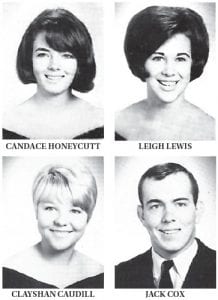 Candace Honeycutt, who graduated from WHS at the end of the last semester, won the Miss Letcher County Beauty Pageant held in the WHS gym on Saturday, April 13. Miss Honeycutt, who now attends the Southeast Community College in Cumberland, was one of the five finalists chosen from the 14 that competed. The five finalists were chosen on the basis of talent, casual and formal wear, and swimsuit competition. The other finalists were Leigh Lewis, Clayshan Caudill, Juanita Miller and Madonna Winchell.

Leigh Lewis, a senior at WHS,was the first runnerup, and Clayshan Caudill, also a senior, was the second runner-up.

Madonna Winchell, a graduate of Jenkins High School, won the Miss Congeniality Award. All contestants were given sterling silver charms by the JC’s and the Beta Sigma Phi.

Besides the trophy, crown, and the flowers awarded the winner, Candace also received a $100 scholarship, a hair dryer, and two complete outfits of clothing. 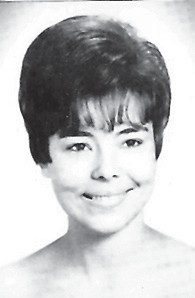 Students from WHS included in the top 10% of the senior class and members of the “W” Club are being honored by the Rotary Club each week. They are given a special luncheon and listen to a message given to them by one of the Rotarians.

The entire student body wishes to express their sorrow and sympathy to the family of Mr. Elmer Banks. Mr. Banks met death suddenly, Friday night, April 5, 1968 en route to Whitesburg from Lexington. His funeral was Monday, April 8, at the First Baptist Church.

WHS senior Jeff Hunsucker has been named to “Who’s Who Among American High School Students”. This marks the first time that a student from WHS has received this honor.

Seniors have received their graduation announcements and calling cards. This is one of the first steps toward graduation in May. Senior “Memory Books” are being distributed around the school and are being autographed by friends and faculty.

Thursday, March 28, the Bible Club had a meeting with the Rev. David Morrow as guest speaker. Rev. Morrow is the pastor of the First Baptist Church in Whitesburg. He spoke on “Evangelism In Depth.”

A tea was given for Mrs. Thomas by the Home Economics classes from 11:50 to 1:25. Anyone could stop by room 16 and receive refreshments. We regret that she has to leave. Mrs. Thomas has been the secretary in the office for the past eight months.

The students of WHS are fortunate to have in their presence a wishing well. Around this lovely well of living waters, grows a flowerless flowerbed. Its beauty is beyond the thought of mortal man. The imaginary roses and tulips bloom with the radiance of the morning star. The imaginary pansies are beyond description. I feel quite certain that the money obtained from this well will be put to some worthy use, such as tending the lovely imaginary flowers that bloom with their entire splendor in this small section of paradise. As I toss my contribution and mite for a wish, it could only be that this beauty remains forever and eternity and there is little doubt that my wish will come true. For the giving heart that gave this mite, I feel quite sure that would be his wish also. We the students, wish to show our appreciation for this well, and would like to thank Mr. Roe and Mr. Frazier for their interest in WHS.

“Around the World in Eighty Days” was presented by the junior class, April 1, in the WHS gym. The response was tremendous. Our congratulations go out to Ralph Coldiron, Martin Mullins, and Mr. and Mrs. Jack Hammock on their performances. Congratulations also go out to the costume department for their outstanding costumes. All participants did an excellent job.

The WHS baseball team started its season on Friday, March 29, by sinking the Fleming-Neon Pirates by a score of 6-31. Doug Moncrief was the winning pitcher with relief help from Garry Banks who struck out 7. Joe Hunsucker led the hitting with 2 hits.

The Jackets continued their winning ways with a 12-5 victory over a fine Letcher team. Doug Moncrief won his second game of the season behind the hitting of Joe Hunsucker, George Adams, and Larry Tolliver, each with two hits.

On April 9 and 10, the baseball team won two games back to back. Gary Banks pitched WHS past Leatherwood 10-9. This game was highlighted by a first inning homerun by Mike Franklin. The second victory was a hard earned 4-2 decision over Hindman. Doug Moncrief won his third game, allowing only 4 hits while his teammates were rapping out 9 hits including 2 each by Joe Hunsucker and Mike Franklin, and a homerun by George Adams.

WHS defeated Carr Creed on Saturday, April 13, by a score of 12-10. David Wright was the winning pitcher although he did need some assistance from Doug Moncrief in the last inning.

The WHS pitching staff consists of two seniors and two juniors. The seniors, Doug Moncrief and Gary Banks, are the no. 1 and no. 2 starters. They both are excellent pitchers and have carried a heavy pitching load for the past two years. Both are experienced and if needed can do a good job in relief. In fact, Doug has pitched in all five games for the Jackets this year. David Fields and David Wright are the junior members of the staff. David Fields started several games last year but so far this season he has seen only limited action. David Wright throws the best breaking pitches and has won one game this season.

(The above articles from the spring 1968 Black Kat.)

The Harris Award is named in honor of Professor H. H. Harris, who served as principal of Whitesburg High School from 1919 until 1927. It is awarded by the faculty on the basis of leadership, character, and scholastic standing. The recipient of the Harris Award for 1968 is Jack Cox.

The Dugan Award is an award named in honor of Miss Ann Dugan, who served as the Home Economics teacher for 27 years at Whitesburg High School. The award was first presented in 1966 and is awarded on the basis of character, scholastic standing and leadership ability. The recipient of the Dugan Award for 1968 is Patsy Day.