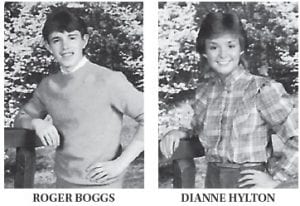 Monick Wampler, daughter of Larry and Peggy Wampler, has been chosen for the honor of the 1984 Miss WHS. Monick was an active member in the Runners and W-Clubs. She ran track and cross country for five years. During her sophomore year of high school, she was a state champion in the 300-meter hurdles, and during her junior year she was state runner-up in the 300-meter hurdles. Monick plans on attending Murray State University, majoring in physical therapy. Her ambition in life is to work in a hospital.

Ellis Maggard, the son of June Maggard and Ellis Maggard, has been chosen for the honor of the 1984 Mr. WHS. Ellis was an active member in the Science and Outdoor Clubs. He participated in the Whitesburg High School track program by running the quarter mile. Ellis was a cadet in the Letcher County JROTC program and he was ranked first lieutenant. He plans to attend Eastern Kentucky University, majoring in business administration. Ellis’s goal in life is simply to reach all the goals he sets for himself. 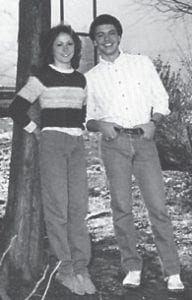 Named Most Popular are Natalie Gibson and Randy Niece.

Nov. 16, 23 new members were initiated into the French Club (one must have had two years of French or be in his second year to be eligible to join our club). The initiation lasted for three days. 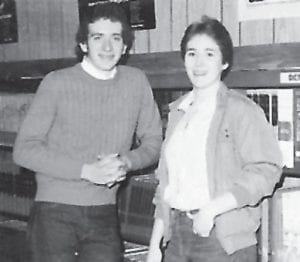 Named Most Talented are Harold Trent and Sandy Brown.

There are now a total of 38 French Club members.

The French Club is looking forward to our December meeting. We plan to sing French Christmas carols as done in previous years. We are also having secret Christmas Angels the week before Christmas break.

The Harris Award is named in honor of Professor H.H. Harris, who served as Principal of Whitesburg High School from 1919 until 1927. It is awarded by the faculty to a senior boy on the basis of leadership, character, and scholastic standing. This year’s recipient is Roger Boggs. 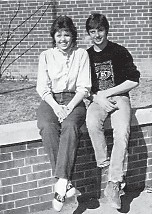 The Dugan Award is an award named in honor of Miss Ann Dugan, who served as the Home Economics teacher for 27 years at WHS. The award was first presented in 1966 and is awarded by the faculty to a senior girl on the basis of character, scholastic standing and leadership ability. This year’s recipient is Dianne Hylton.

Patty Morgan: watching children’s eyes light up as they open their colorfully wrapped gifts; Mildred Caudill: when people give gifts, be with loved ones, and the birth of Jesus Christ; Tracy Adams: sharing time with your family and friends; Bessie Collins: when the children of the family get up on Christmas morning and open their gifts, the glow on their faces makes all the sacrifices worth it; Danny Benson: a time for giving and sacrifice; Tina Sturgill: a time for sharing; Randall Baker: no school, lots of presents, lots of food and the celebration of Christ’s birthday; Becky Gilliam: a time for sharing and being with the people you care about; Carlos Standifer: being with the ones you love in celebration of Christ our Lord; Rex Hoskins: receiving and giving presents to people, eating Christmas dinner, setting up the Christmas tree, and friends and relatives coming in and visiting you; Carolyn Sturgill: seeing all the love and joy shared between friends and family; Lucille Collins: Christmas is a time for giving and receiving, celebrating the birth of our Lord and Savior Jesus Christ, and spending all the time with your loved ones; Terry Howard: people showing their love for one another by giving gifts to the ones they love; Robert Gray: joy, happiness and sharing gifts.

The trip was chaperoned by Jeanette Sparks, instructor, and Marie Reynolds, bus driver.

Letcher County also won the theme competition, which will now be entered in the National Competition. The theme was “The Health of Tomorrow is in HOSA Today.”

The students who placed have the chance to compete in the National Conference to be held in Orlando, Fla. in June.

Mrs. Sally Hubbard has joined the teaching staff of WHS recently She likes teaching at WHS, though it’s hard, being so young.

Mrs. Hubbard is a graduate of WHS, class of 1979. She attended Morehead State University for four years, majoring in health and biology.

Mrs. Hubbard enjoys working with the rest of the faculty and appreciated their support and help. When asked to name something she disliked about the school she paused, and really couldn’t think of anything.

Mr. Carter Bradshaw has returned to WHS from Fleming-Neon after 2 ½ years. He’s glad to be back at his alma mater.

In 1976, he was elected Central Kentucky Coach of the Year, and has decided to return to coaching. This year, at WHS, he is teaching biology, health and general science. In all, Mr. Bradshaw is glad to be back with familiar faces and places.

(The above articles from the 1983-84 Black Kats and the Yellowjacket Yearbook.)