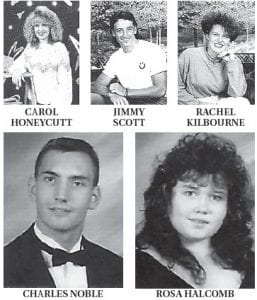 Carol Honeycutt, Jimmy Scott and Rachel Kilbourne placed in the top three in their individual events at the State Conference and earned the right to compete at the National DECA Career Development Conference held in Denver, Colorado in May. 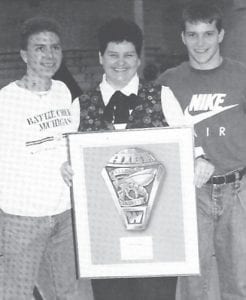 The Harris Award is named in honor of Professor H.H. Harris, who served as principal of Whitesburg High School from 1919 until 1927. It is awarded by the faculty to a senior boy on the basis of leadership, character and scholastic standing. This year’s recipient is Charles Noble.

The Dugan Award is an award named in honor of Miss Ann Dugan, who served as the Home Economics teacher for 27 years at Whitesburg High School. The award was first presented in 1966 and is awarded by the faculty to a senior girl on the basis of character, scholastic standing and leadership ability. This year’s recipient is Rosa Halcomb.

WHS is now offering an alternative to what many students refer to as “plain” science and biology classes. Taught by Sally Hubbard, Anatomy and Physiology is the study of the human body and how it works. This advanced course deals especially with labs. Hubbard seems very enthusiastic about this class, “It’s my favorite class and I really enjoy teaching it.”

Being the complex course it is takes hard work, but along with work comes fun. Hubbard hopes to take her students to the UK Medical Center in Lexington and other outof class projects. In the past years the demand for something new, advanced and more complex was great. “We need Anatomy and Physiology,” says Hubbard, “because we have so many students going into the medical profession and they need this course to fall back on.”

The WHS Drama Class will be performing ‘Look Homeward, Angel,’ a play written by Ketti Frings, based on the novel by Thomas Wolfe. Performance dates are scheduled for Nov. 31 and Dec. 1 at the Appalshop. The class is planning to present a school’s showing to the freshman and sophomore classes on Nov. 29, and to the juniors and seniors on Nov. 30, pending approval.

‘Look Homeward, Angel’ is a play about one young man’s coming of age and the troubles he faces. These hardships include an overpowering mother, a drunken father, a confused home life, the death of a relative, and the heartbreak of love.

‘Look Homeward, Angel’ is a fitting play for the times because nowadays more that ever it seems harder to succeed. It deals with problems facing today, especially the younger generation.

On Oct. 13, 1990, the WHS Flag Squad competed with other schools from Virginia at the McChesney Flag Competition. The competition was held in Big Stone Gap at Powell Valley High School. Our flag group received a superior rating, and was said to be the best seen.

It was presented by Senior Class President Skipper Nantz, Vice-President Lawrence Holland, Jr., and Librarian Sandra Banks to the student body. The new official mascot will be the only Yellowjacket used from now on. Instead of the confusion of what kind of Yellowjacket to use, this committee has taken care of that problem. Class rings now have the official Whitesburg High School Yellowjacket mascot on them.