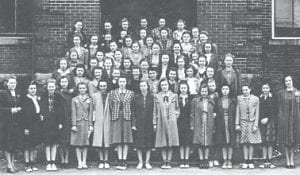 A Kentucky girl, born in Seco on Oct. 16, 1922, she was raised in Whitesburg. She became a member of Graham Memorial Presbyterian Church, graduated from Eastern State Teacher’s College, and taught typing and shorthand at Whitesburg High School from 1944 to 1946. She was described in a 1946 yearbook as “sweet and understanding as anyone you’ll meet.” On Feb. 22, 1946, Mary Glenn married a Kentucky boy, her high school sweetheart, “Jack,” at the Lexington Presbyterian Church. This followed his return to the States after serving in World War II. She then worked as a bookkeeper in Stewart’s Department Store and lived in Louisville and Shelbyville while Jack worked on his degree from the University of Kentucky. The family moved to Norton, Va., where Jack joined his dad at the corner drugstore, Passmore’s Pharmacy. 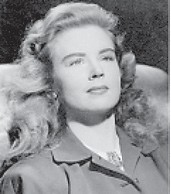 The past several years, Mary Glenn resided at the Joseph C. Thomas Center in Salem. It was here that she met her dear friend and roommate, Lucille Akers. A loving daughter, sister, devoted wife, sympathetic teacher, patient and kind mother, proud grandmother and great-grandmother, a loyal friend, and consistent Christian, she merits the words of her Master, “Well done, good and faithful servant, enter thou into the joys of Thy Lord.”

Mrs. Passmore was a member of the WHS Girls Reserve during her junior year.

On Wednesday afternoon The Eagle was honored by a visit from the journalism class of Whitesburg High. About 16 students with their teacher, Mr. Stallard, and Coach Follace Fields, spent the 45-minute class period learning about the Linotype machine, how articles were prepared for the paper, something about ‘make up’ and finally watched several copies of the inside pages of this week’s Eagle emerge from the press. These students were very much interested in this phase of the printing shop as they plan to make a high school paper next year, and hope to learn a lot by this year’s observation and text book studies.

The Whitesburg Future Farmers Chapter, after having been selected as the outstanding chapter in the Eastern Kentucky District was ranked third in the State Chapter Contest, it was announced Friday night at the annual Future Farmer Banquet, held in the Kentucky Hotel ballroom.

The chapter received as a reward for their placing third, a set of Trail Blazer series of books, awarded by the J. B. Lipincott and Company.

Other honors won at the convention in Louisville included first place on the Chapter Treasurer’s Book, kept by Jack Cornett, chapter treasurer; first place in the Home Beautification Contest, won by Burnis Banks of Ice; and second place in the State Scrapbook Contest.

Harry Caudill, secretary of the Whitesburg Chapter, was awarded the State Future Farmer degree at the convention. Harry is the first boy in Eastern Kentucky to receive this honor. The State Farmer degree is next to the highest honor that can be obtained in Future Farmer work. The highest honor is that of American Farmer. Harry also served as a member of the State Activity Committee at the convention.

Thursday, Aug. 8, at 1 p.m. the teachers of the Whitesburg School gathered for a planning and organization meeting. Nineteen teachers were present in addition to Superintendent Watson Webb, Principal Fields, and Mr. Blaine, a book salesman. After invocation by Mr. Harris general plans were made for the year, which included the beautification of campus and buildings; improvement of libraries; and organized effort to teach proper citizenship attitudes; and plans for teacher study in the faculty meetings during the year. Additional meetings were planned, one for Monday, with the high school teachers and one on Thursday with the grade teachers. Following the meeting, Mrs. Orell Fields served refreshments, and the entire group left with the feeling that the Whitesburg Schools were starting another good year.