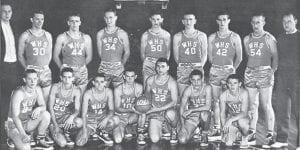 The Harris Award was named in honor of Professor H.H. Harris, who served as principal of Whitesburg High School from 1919 until 1927. It is awarded by the faculty on the basis of leadership, character, and scholastic standing. This year’s recipient is Martin Lewis.

To one whose friendliness and loyalty has won a place of high respect, deep admiration, and warm affection among both the student body and the faculty. With deep appreciation for his service to us as a teacher, a friend, and assistant principal, we dedicate this, the 1961 Yellowjacket to Mr. R. Edgar Banks.

“Three Nights a Week” Mary Gentry to John Clyde; “Always It’s You” Roger to Fredia; “Kiddeo” Ronnie to Connie; “I Want to Be Wanted” Stevie to Lorraine; “Tell Me One More Time” Phyllis to Buck; “Put Your Arms Around Me” Marsha to Carl; “It’s Too Soon to Know” Nell to Paul; “It’s Now or Never” Janice Bates to Bobbie K.; “I’m a Man” Kenneth to Barbara; “Oh, What a Dream” Russell to Joyce”; “Love Me or Leave Me” Anna H. to Ray; “Let’s Dance” Hilda to Billy Wayne; “I Want to Be Wanted” Billie to Ken; “To Know Him is to Love Him” Francis to Henry; “Lucille” Barbara to Roger; “Blues Get off My Shoulder” Dorthy to Patrick; “Save the Last Dance For Me” Tid to Brenda; “Mission Bells” Steva to Larry; “Lonely Teenager” Josephine to Owen; “You Talk Too Much” Miss Adams to 2nd Period Study Hall; “With You” Olivia to Herbert; “All I Could Do is Cry” Rana to Benny; “Am I Losing You?” Nancy to Carlos. 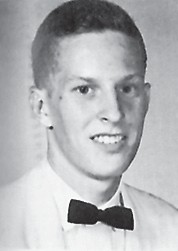 The Whitesburg Band and WHS are very honored to have as our band director, Mr. Frank Charles Bickel, who was born in Louisville. He attended Shawnee High School and Eastern Kentucky University, where he received his A.B. and M.A. degrees.

He is married to Barbara Isaacs. They have a little girl, named Cathy, who is 11 months old.

Mr. Bickel likes photography and home movies. He would like to see the music appreciation program to work.

Our band has been most active and successful, at least we think so.

Under the direction of Frank Bickel, we have come along very well, considering our numbers. We only have about thirty members, but we are working hard to achieve the rank of a fine band.

This year, we have attended nine ball games and performed at seven. The first game we were unable to attend due to the delayed arrival of our director. Our second and third ball games with Benham and Belfry, rain prevented our performing. Our first home performance was for the Cumberland game. We traveled to Hazard where we put on one of our best shows. The next ballgame was Homecoming!! We entered in the festivities of the most successful Homecoming Parade. We performed again that night at half time of the game. Since then, we have been on the road performing at Jenkins, Fleming, Prestonsburg, and Elkhorn City. This weekend, we did not attend the Pikeville ballgame, but we went on Saturday to Fleming for their Homecoming Parade. 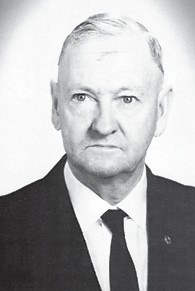 Outside of school activities, we have marched for both the Democratic and the Republican rallies, we have had in town. Next week we will travel to Paintsville for the Big Sandy Bowl. We hope to win a prize at this event to bring back to WHS.

We had a very nice Halloween Party sponsored by our band boosters. Those of you who had dates with band members know how successful this was! 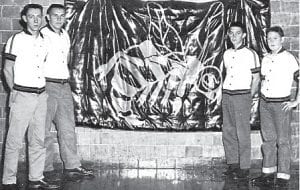 Ambitions of some of the seniors

To be a nurse; Carl Banks, Have the best band in Florida and marry Marsha; Jean Lewis, To be a grade school teacher.

The first game of the District Tournament was played between Jenkins and Kingdom Come, the host team. K.C., a young team, could not expect to win the tournament, but still are good sportsmen. The score was 78-43. Next year, the tournament could look their way.

In the second game, the Whitesburg Yellowjackets and the Letcher Eagles played. Paul Yonts , the leading scorer, paced the Yellowjackets to a 14 point victory over Letcher. Bill Hatton of Letcher gave the Jackets a little trouble in the first half of action, scoring the first 2 points and 8 for the half. The Jackets led the first quarter 9-7. At the half, the Jackets led only by 4 points.

Friday, the Whitesburg Yellowjackets, scraping out 1 point margin over Fleming Neon in an overtime Friday, took the honors of the game in order to meet Jenkins for the Championship Saturday. Fleming led most of the game but Whitesburg caught fire in the fourth quarter. J.D. Jones and Jerry Coots, the K.C. transfers, led the rally. Jimmy Stamper sank a basket just as the buzzer sounded to send the game into an overtime period.

In the Saturday night game, the Yellowjackets jumped out to a 4-0 lead and were never headed as the Big Green just couldn’t seem to hit. Whitesburg led by 38 points midway the fourth quarter as Coach Burton began to substitute and the scrubs played the rest of the game. The scoring for Whitesburg was Coots with 17, Yonts with 13, Jones with 19, Jimmy Stamper with 12, Frazier got 6, and Steve Stamper with 5. Mullins had 14 and Pack got 12 for Jenkins.

(The above from the 1960-61 Black Kats and the Yellowjacket Yearbook.)