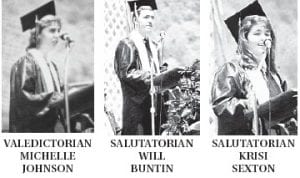 Whitesburg High School’s Baccalaureate and Graduation were held at 2 p.m. at the WHS Football Field on May 29, 1988. The invocation, given by Mr. James Estep, was followed by speeches that were given by the two Salutatorians and the Valedictorian. The Salutatorians, Krisi Sexton and Will Buntin, were greatly appreciated for their speeches about “The Beginning” and “The Challenge” respectively. After the Valedictorian, Michelle Johnson, spoke about “ Reminiscence,” the guest speaker, the Rev. David Banks, was introduced by Principal Darrell Treece. The presentation of diplomas was performed by Superintendent Bernard Watts, and the benediction was given by Mr. Ozz Jackson.

As the Commencement Exercises came to a close, the graduates had experienced a day full of excitement, relief, sadness, and tears. On behalf of the senior class of 1988, “Many thanks to the Sondaze Singers for giving us a heartwarming performance and to Whitesburg High School for giving us such great memories, but most of all for giving us each other.

This year’s Yellowjacket is dedicated to an individual who has given much of his time and cooperation to various clubs and organizations; he has driven the cheerleading bus and has been instrumental in helping with fund-raisers such as magazine drives for senior trips. Not only has this individual taken an active role in promoting student activities, but he has played an important role as a representative of eastern Kentucky during a folk dance festival held in Berea. Our recipient has been a teacher for 27 years and has been a sponsor for cheerleading, the Folk Dance Club, and the Science Club. He is not only a special teacher, but a special friend to all of his students. The 1987-88 Yellowjacket is dedicated to Mr. Dan Polly.

Keith Baker is a son of Edsil and Carol Baker. He has served the WHS basketball team as a guard for the past three years. As a senior Keith received the 110% Award.

Steve Cook is a son of Mary Halcomb. Even though he has only been a member of the basketball team for two years, Steve received the honors of being named All-EKMC, and the Most Improved Player on the team.

Brian Frazier is a son of Darrel and Jackie Frazier. He has been a guard for the WHS basketball team for the past four years. As a junior, Brian was named All-EKMC. This year Brian was named All-District, and the Most Valuable Player. Brian also performed the most assists and the best Free-Throw Percentage in the ’87-’88 season.

Chris Frazier is a son of Rokie and Joyce Frazier. He has played as a forward and guard for the past four years. He was named All- EKMC and received the best 3-point FG%.

Larry Maggard is a son of Gurnie and Anna Lee Maggard. He has been a member of the basketball team for the past four years as a center and forward. Larry was named All-EKMC for the past two years and was named All-District this year, and earned the most rebounds and the highest FG% during the ’87-’88 season.

John Ray Thomas is a son of Raymond and Joyce Thomas. He has been a member of the WHS basketball team for the past four years, playing forward. He received the award for having the best GPA on the team.