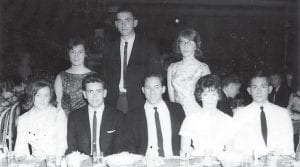 One of the many activities of the senior trip to Washington, D.C., was the opportunity to attend the Casino Royal Night Club, which was located at 14th and H streets in Washington, D.C. This smart restaurant/night club, featured delicious and appetizing Chinese and American foods. The seniors were entertained by John Gary, well known singer, recording artist, television host and performer on the musical stage.

Vickie Moore, whose little boy-shirts have you been wearing for dresses? Barbara Williams, who’s that Craft boy? Charlotte Holbrook, why do you like Pikeville College? You too, Pauletta Caudill. Sonja Boggs, why are you and Tab getting along so well, is it that he isn’t here? Is it true that when Cecelia and Rokie walk by we hear bells? Charlene Collins, are you going to pay for the nerve pills Sonja, Mildred and Sharon had to have after that ride from Hazard? Jo, how are you and Billy Cooper making it? Who is the boy from Hazard, and Virginia? Could it be Jim Webb? Sharon Adams, what’s Stevie going to say about Evan? Kay, what’s this about you and Gary? At least we have one steady couple, Shirley and Ty. Ronald, Michael and Stevie, where’s the medals you get from running laps? 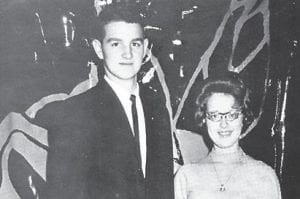 The Kat is very proud of our A-team cheerleaders. Sharon and Ricky are making it steady. Ronald Banks, who’s that junior girl? Could it be B. D.? Mahala, who are you dating now? Liz Smith who did you see at the M.C. Napier game? Cathy S., who’s the lucky boy? Vickie, were you really in Hazard, Friday night? Mabel, who’s going to be the lucky one now that Jimmy Stamper is gone? Could it be Jimmy Combs? Michael Adams, why don’t you give that cute little junior girl a chance? The Kat thinks Kelsey and Cathy make a cute couple. 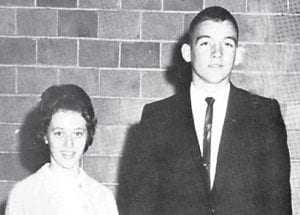 Seniors worked hard on the magazine drive but fell a little short of their goal of $5,500. Let’s work, seniors, so we can go to New York and Washington, D.C.

Junior concession stand at the county fair was very popular. With only two home games, juniors will have to work hard for money for the prom and senior trip.

Homecoming will be Oct. 25, Elkhorn City football game. The theme for floats is “Schools and Colleges in Kentucky.”

Astor and Clyde to all teachers: ‘Desert Pete.’ Janice to Allen: ‘I Saw Her Standing There.’ Clyde to Glenis: ‘Bring It Home to Me.’ Roy to Debbie, Carol to Cecil, Walter to Carolyn: ‘Young and In Love.’ Elinda to Ronnie: ‘There I’ve Said it Again.’ William to Jo Linda, Roger to Wanda: ‘Puppy Love.’ Vicki to David: ‘ You Can Never Stop Me From Loving You.’ Sheila to William: ‘What Kind of Fool Do You Think I Am?’ 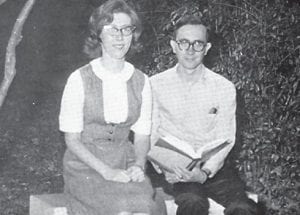 Gossip from the Kat

Miss Lily Jane Collins seemed to enjoy the Letcher basketball games the most but she kept her eyes not on the team but on the coach. The Kat sees Gary G. and Linda are dating. Charlene, why do you like “Dear John” so much? Tommy Davis, why don’t you get the girl at WHS? Randy and Jeanie are still a steady couple. The Kat will miss the senior play characters and the senior cheerleaders! The Kat wishes to announce the marriage of Pat Livingston and Jimmy Stamper! Hilda and Roger sure like 3rd period.

The last six weeks have shown the rewards of the previous work of the juniors, but also how much more there is yet to do. The treasury has $1,270 brought in from concessions at football and basketball games. This is very good considering the loss of the Hazard and Fleming football game, and the Cumberland basketball game. The Hazard game next year will belong to the juniors in return for the Fleming-Neon game being given to the band this year. 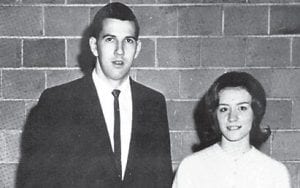 Most Likely to Succeed RICKY BANKS and KONI UNDERWOOD

Mr. Burkich has set a minimum of $1,800 by the end of the year in order for us to plan to go both to Washington and New York. This means we must hustle, for after paying the expenses of the prom we will be rather low. This will be quite a sum to raise, but the junior committee passed a selling project for the late spring, plus the $10 fee per person for the trip and all past dues brought in — this will probably bring us up to date. 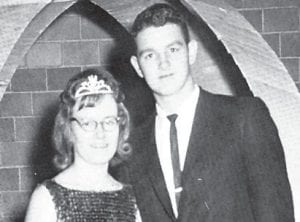 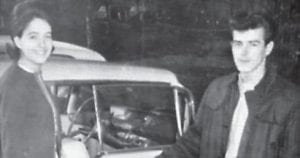 Most Attractive and Handsome VIRGINIA ASHER and FRANK JOHNSON