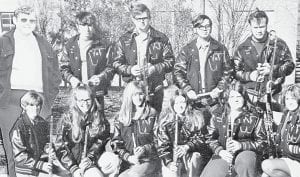 The band boosters sponsored a farewell band concert for seniors on Sunday, May 21, in the Whitesburg cafeteria. Under the direction of Mina Breeding, the band played “Montage”, “Overture in B Flat”, and “Sonnet and Dance.”

The WHS Chorus sang “We’ve Only Just Begun”, “California Dreaming”, “If Ever I Would Leave You”, “ Now Let Me Fly”, and “Close To You”.

After a 15-minute intermission, Mr. Burkich gave a brief address to the audience and band members. Afterward, the Band Boosters gave several door prizes. Miss Mina Breeding then recognized the seniors and announced that Randy Breeding was chosen to receive the John Phillip Soussa Award. As a grand finale, the band played “Pageantry Overture”, and “Rhapsodic Episode”.

The Whitesburg High School’s annual Athletic Banquet was held April 22 at the high school cafeteria. Coach Joe Hall, who is replacing the retiring Adolph Rupp as head coach of U.K., was the guest speaker. Ten awards were distributed at the banquet. Recipients were, Basketball: Mile Polly, Leader in Assists and Leader in Free Throw %; Stevie Banks, Leader in Rebounds; Don Hogg, 110% award.

All athletes and cheerleaders were recognized at the banquet.

April 25 became a historic occasion for WHS sports as interscholastic competition opened up for the female faction of our alma mater. The feminist movement of the school made their track debut in competition with area schools. Although not winning the meet, we can look for better things in competition as our girls get in shape and firm up for the next meet.

WHS has for the first time in school history, a girls’ track team coached by Mrs. Richardson. The girls already have run in Jenkins, showing terrific promise. Mrs. Richardson is very optimistic of the girls’ ability to win in track. Bright promise was shown in Debbie Hammock, Sharon Niece, Francine Eversole, Greta Wesley and the remainder. A fixed, permanent team has not as yet been instituted as girls keep joining while others quit.

Freda Brown has been named WHS Betty Crocker Homemaker of Tomorrow for 1972. She was chosen on the basis of her score in a written knowledge and attitude examination taken by senior girls on Dec. 7, and will receive a specially designed award charm from General Mills, sponsor of the annual educational program. Additionally, she is now eligible for state and national honors. 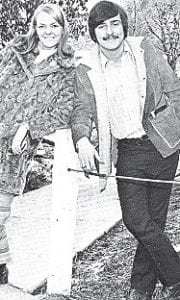 The State Homemaker of Tomorrow, to be selected from all school winners in the state in judging which will center on performance in the Dec. 7 test, will be awarded a $1,500 college scholarship and $500 will go to the second ranking girl in the state.

More of the class will

Teresa Baker wills to Mr. C.B. Banks one slightly worn copy of Das Kapital and Other Favorite Communist Jokes and to Mr. J.M. Burkich’s one Handbook of Broadway Plays to Avoid and suggest he read it before next year’s senior trip.

Paula Crase wills her ability to get her driver’s license to Dallas Boggs because she needs it; Vera Engle wills her position as Sweetheart of the French Club to James Bradley Breeding; Nancy Boggs wills her ability to cry easily to anybody that’ll have it; Ann Tolliver wills her longer skirts to Janet Bowen in hopes she won’t hem them; Peggy Raleigh wills her nickname (Sir Walter) to Sharon Raleigh and hopes that she appreciates it; Jerry Sexton wills his sucker punch to all the “little brutes” in Whitesburg; Sherry Parrott wills her ability to giggle in class to Miss Whitaker; Gary Mullins wills his key to the coach’s office to Glenn Palumbo with the hope that he will acquire many more football jerseys; Mary Maggard wills her seat in Miss Whitaker’s Eng. IV class to Lisa Waller in the hopes that she will have lots of fun. 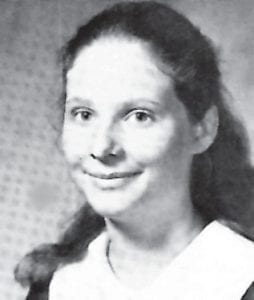