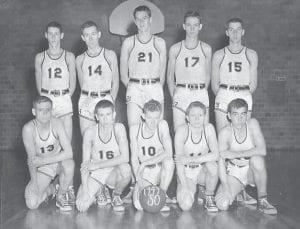 The Whitesburg Future Homemakers of America was hostess to a very successful district meeting Saturday, Oct. 29. The meeting started with the registration at 9:30 a.m.

Other activities included skits by each chapter, a movie showing the latest development in modern kitchens, talks by a chapter mother and an advisor, and an interesting session on the problems that face the entire family.

The lunch hour proved to be very entertaining. All the tables at the school lunchroom were decorated with autumn colors. While the girls were eating, a ghost story was told by some unknown character, which resulted in screaming from all the girls.

There were about 150 girls at the meeting. After the final session, the visiting chapters were given time to visit Whitesburg and the school campus.

The Whitesburg Yellowjackets took the lead in the Sandy Valley Conference last Saturday night by defeating the Fleming-Neon Pirates by a score of 14-6. The game, originally scheduled for last Friday, had to be postponed because of rainy weather.

Both teams played a hard, defensive ball game in the first quarter for no scoring. Fleming’s single marker came in the second quarter when Burns made a long run climaxing a 66-yard drive by the Pirates. The extra point failed.

Whitesburg made their first score in the game after a 38-yard pass to Porky Polly on the Fleming 11-yard line set up the touchdown with Kincer catching a pass in the end zone for the score. The extra point was good and the half ended with the Yellowjackets in the lead 7 to 6.

The second Whitesburg touchdown came in the final quarter when Kincer caught a pass on the five-yard line and went over standing up. The touchdown was set up when Polly recovered a Fleming fumble on their 25- yard line.

Delmar Ison, son of Mr. and Mrs. Grant Ison, and a student at the University of Kentucky College of Law, has been appointed to the staff of the Kentucky Law Journal, it has been announced by the faculty of the College of Law.

This journal is a quarterly publication of the faculty and students of the College of Law. It is a legal periodical, having a high rating nationally among professional journals of its class. It is now in its 38th year of publication. Ison is a graduate of Whitesburg High School.

Daphne Hellman brought to us a program that was as entertaining as it was unusual. An accomplished harpist, whose fine playing of the classics has been praised by numerous music critics, Miss Hellman is also at home in modern day music. Her program, the best in the classic repertoire, the best in modern swing and combination of both since one of the highlights of her performance is a group which she “Swings the Classics.”

Oct. 23, the Baptist Church of Whitesburg brought to us the Georgetown Choir. The choir sang three groups of songs. They were spirituals, sacred, and a special group, which they do for high schools only. Mr. Andrews, the director, sang “Glory Road,” which was enjoyed very much by the students. Everyone enjoyed the program, especially so because Jackie Combs, a graduate of ’47, was in the choir.

Carlene Webb and James Gose didn’t stay mad long, did they? Oh! well, that’s love! Did Joe Preston give you some good advice, Mary Wright? Sadie Bentley has her heart set on the freshman class! Come to think of it Sammy Banks is in that class too! Margaret Wheeler seems to like roller-skating, wonder why? Bobby Neice, do you still write Kitty? We saw a cute couple on the Cumberland bus. They are Eugene Collier and Nanny Maynard. Jenny Williams, have you found your true love at last? Lora Lou Bentley seems to have her heart taken from her! Could Gilbert Meade be the lucky boy holding it? Peggy Maggard, who is it going to be, Clyde or Tommy?

The band has begun work on the contest music. We have chosen “In a Persian Marketplace” and “Thendara,” two very beautiful overtures, and for the march, we have decided on “Little Giant”. Even though the three numbers are very difficult, the band is making great progress in the mastering of them.

A large number of students have been taking band since the beginning of this school year, and are now ready to fill in the vacant places left by the graduates of last year’s senior class. Mr. Adams feels that the band has the largest variety of instruments this year it has ever had.

Bill Wright to Norma Polly, “Again”; Nellie Gibson to Calvin Thomas, “You Are My True Love”; Jimmie Tackett to Jennie Combs, “It’s All Over Now”; Judith Clay to Eugene Collier, “Hillbilly Wedding”; Gloria Mae to David, “With My Eyes Wide Open”; Jimmy Fraley to Carolyn Minton, “Forever And Ever”.

Jimmie Bert and Della Mae seem to be feuding and fussing lately. Come on, you two, can’t you iron out your troubles? What’s the matter, Jack Fairchild? Why aren’t we seeing some of that Fairchild technique? Lon Fields, that eligible bachelor, would like to get latched onto by some good-looking girl. What’s the matter, girls, are you slipping? Helen B. and Wayne P. are interested in the same things, band, lessons, and, of course, each other. An I.D. bracelet has exchanged hands. From Doug Hunsucker to Elizabeth Adams. Maybe it’s love!

The Pee-Wee Chorus, made up of boys and girls from the fifth and sixth grades, put on their first program of the year for the Parent-Teacher Association, Tuesday afternoon Jan. 17, in the Graded School Auditorium. They were directed by the following high school girls from the Glee Club: Deloris Holbrook, Wanda Kincer, Peggy Maggard, and Martha Ann Holbrook. The parents enjoyed the program very much.