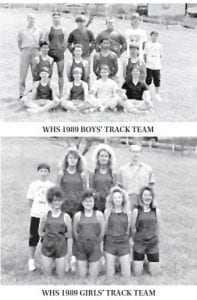 The honor of Mr. and Miss WHS has been awarded to William Bledsoe and Tracie Boggs. This honor is awarded each year to two outstanding students on the basis of their leadership abilities, courtesy toward fellow students, and strength of character.

William is the son of Johnny and Pamela Brown of Partridge. The past four years, William has been a receiver for the WHS football team. He was also Junior Class President and an active member of the Beta and Science Clubs. We would like to wish William the best of luck as he plans to attend college this fall and major in secondary education.

Tracie is the daughter of Cassel and Opal Boggs of Cowan. The past two years, Tracie has been a member of the Yearbook Staff and Drama Club. She has also been an active member of the Student Council, Junior/ Senior Committee, and Science Club. We wish Tracie the best of luck as she plans to attend college this fall and major in elementary education. 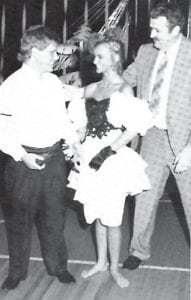 Stephanie has been chosen as the 1989 Miss Yellowjacket. This award is based on outstanding leadership, scholastic ability, and character. She is the daughter of Jimmie and Brenda Collins of Whitesburg.

Stephanie has been a member of the French Club and FHA for three years. She served as Regional Vice- President in FHA her junior year and has been an active member of the Beta Club. Stephanie has served on the Student Council and junior/ senior committees. Her future plans are to attend Union College and become a physical therapist.

I, Jennifer Sexton, will my natural blonde hair to Misty Breeding; I, Mark Caudill, will my height to Scott Boggs because he needs it; I, Craig Ison, will my parking space to Joe Baker, but be careful, it’s right next to Mr. Jones; I, Amy Patterson, will my ability to get a boyfriend and keep him to my sister Dana; I, Larry Tackett, will my Oldsmobile to Daniel Sturgill; I, Roger Mason, will 200 pounds to Tracy Pelfrey so he can take over my offensive tackle position in football; I, Anthony Amburgey, will my nickname “Hollywood” to Scott Tillie; I, Tom Brennan, will my brother Dan his name back; I, Tracy Epps, will my ability to stay calm in fights with my boyfriend to Kathy Hogg; we, Karen Short and Tracie Boggs, will our ability to stay on the elevator on the senior trip and not get off on the 9th floor to Nikki Williams and Jennifer Short; I, Bart Frazier, will a carton of eggs to Eric Polly, I also will Jacket Joker to Joel Webber; I, John Chris Hylton, will my ability to stay cool under pressure and to have 3 lockers at school to Dan Brennan; I, Ralph Profitt, will my adorable personality to every grouch who remains on the hill; I, Hatler Dee Kiser, will my arm to the Cincinnati Reds because at tryout camp they said they liked my arm but I was too young; I, Steven Lewis, will my ability to play pool to Elijah Fleming and Robert Soto; I, Kevin Fields, will my handicap parking place and driving abilities to Tracy Pelfrey; I, Teresa Back, will my ability to eat junk food to Chuck Noble; I, Clay Holbrook, will my ears to Ivan Whitaker so he will look normal; I, Leroy Maggard, will my nerve to ask girls out to Brian Tidd and my ability to deal with women to Timmy Brock so he can stay out of trouble; I, Shane Collins, will my experiences with the Whitesburg Police Dept., along with my excellent driving record to Tony Benton, but it is doubtful that he will need it, since he has never exceeded the speed limit; I, Brian Banks, will my haircut to Bruce Sexton; I, Karen Short, will my ability to know everything on the hill that’s hot to Sharon Short and may she carry on the name “Gossip Queen”; I, Rich Mullins, will my catching ability to Lance Thomas; I, Toby Maggard, will my eating ability to Tim Bates in hopes he will someday grow up and play with the big dogs; I, Kathy Collins, will my old locker, my ability to act crazy, and my books.

“One Moment in Time”

This year’s prom was very special. The seniors would like to thank the sophomore servers that made the night even more rememberable. They were: Chris Perry, James Larkey, Chuck Noble, Jerry Nantz, Shelli Jackson, Mary Meade, Nicole Taylor, Honey Sergent, and Kristi Craft . e

This year the junior class of WHS chose “One Moment in Time” as the theme for this year’s Junior-Senior Prom. The colors were black and white and the scene was a magical ballroom. Roses added a touch of class to the mystical night. As the time drew near, the junior and senior classes awaited the crowning of Prom King and Queen. At 10 p.m., Mr. Treece announced Renee Sexton and Colin Fultz as King and Queen. Everyone was pleased but also relieved to have the waiting over with.

The girls’ track team was quite successful as they managed to win almost everywhere they competed. The high point of their season was winning the regional runner-up trophy and finishing a close third in sectional competition.

The year’s team was led by senior captain Rachel Neace, who was outstanding in the long jump and sprinting events. Rachel is an outstanding student athlete whose absence from the team will be sorely felt. Both Lisa Wilcox and Shondra Cates were also track stars who helped lead WHS to several victories. Lisa and Shondra were state finalists and won medals at the state track meet. Shondra is a 7th grader who has already been named to both all-state and all-American teams.

The boys’ track team placed highly in all of their track meets. The highpoint of their season was finishing a very close second to Jenkins in the EKMC championship meet and placing 5th in regional competition.

The WHS squad was led by an outstanding group of seniors: Chuck Howard, Junior Matthews, Brian Bledsoe, Jeff Bledsoe, Jamie Stidham, Archie Crawford, and Brian Arroz. Jeff Bledsoe and Brian Bledsoe were state finalist. Jeff managed to win a third place medal in state competition and earned a first team all-state selection. The intensity and efforts of the seniors was extraordinary and will not be forgotten by the remainder of the squad.

(The above articles from the Yellowjacket Yearbook and Black Kat newspapers.)