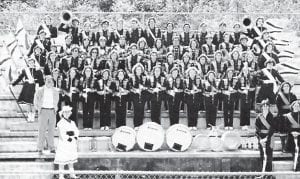 Since its inauguration in 1954, thousands of U.S. high schools have presented the John Phillip Sousa Band Award to their most outstanding band student. The award recognizes those young musicians displaying superior musicianship, leadership, dependability, loyalty, cooperation, and other qualities of conduct which school instrumental music programs strive to impart. The Sousa award is the top nationwide prize in the school band field, both in prestige and appearance. It promotes the entire band by encouraging musicians to greater achievement and enthusiasm while providing an inspiring stimulus for potential instrumentalists. The handsome award reflects credit on both the band and the director. This year’s recipient is Rick Sparks.

Cyndee Wilson went to summer school to get her American history over with. She spent the rest of summer with Rod. James Shepherd watched women. Gene York worked, went to Tennessee, came back and worked more. Andy Wright worked, went to the movies and spent a lot of time with Michelle. Suzann Hall grinned and said “Do I have to tell?” Pam Nelson went swimming, traveled to Morehead and Western Universities for basketball camp and went to baseball games. Lori Holbrook rode in Jeanne’s car until she wrecked.Mickey Sexton laid in bed dreading band camp. Tanya Amburgey chased after boys. 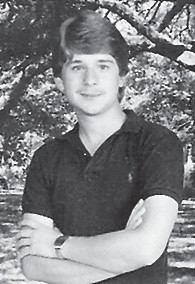 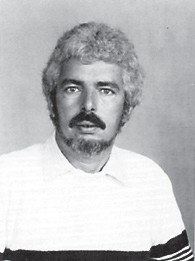 We know that an education is very important. You take time to help each student, and you have a sincere desire to further our education.

Giving your time to the Beta Club is one way you show that extracurricular activities play an important part in a student’s development. We thank you for this.

Because of your dedication to WHS, we humbly dedicate the 1984 Yellowjacket to Mr. Bruce Sexton.

With the addition of the Junior Reserves Officers Training Corps to our curriculum, we now have a chance to learn basic military skills.

The course is taught by Sgt. Enoch Sturgill, who is a native of Letcher County. Mr. Sturgill was in the military for many years before leaving to return to his hometown. He is married and has three children.

Because of the lack of time and space, students had to be picked on the basis of their academic standings and attendance. Students who were picked for the class have gained much knowledge about the U.S. military with much more to learn. Every cadet had the opportunity to participate on the drill team or color guard along with many other JROTC activities. 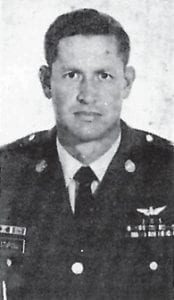 The cadets in the JROTC had several visitors in the past few months.

Sheriff Ben B. Taylor presented a slide show and spoke to the class about his Army career. He was a member of the prestigious Green Berets during the Vietnamese War. The cadets enjoyed Sheriff Taylor’s interesting presentation.

Drug and alcohol abuse was the topic discussed by Mr. Hall, who works in a drug rehabilitation center. Mr. Hall has made several visits to talk to cadets about the many dangerous side effects of drug abuse.

First aid plays an important role in the JROTC program. Cadets have been studying basic first-aid techniques for the past two months. Mr. Newman, an employee of South East Coal Company, presented two classes on basic CPR procedures. Cadets had the opportunity to practice CPR procedures on an “Annie” doll. The classes were enjoyed and appreciated.

The JROTC program offers all cadets the chance to receive a scholarship. Ellis O. Maggard is the first cadet from Whitesburg High School to receive a JROTC Scholarship. Ellis went for an interview at Eastern Kentucky University last February. He was accepted and will be entering EKU in the fall.

Mary Ann Morris, a member of the Letcher High School JROTC program, also applied for a scholarship at EKU. Mary Ann will be majoring in communications. She has been put on a waiting list due to lack of space.

The JROTC cadets recently had a dance. Cadets brought tape recorders for entertainment. Soft drinks were donated by Coke and RC Bottling companies. The dance was a huge success as cadets had a great time. Proceeds will go toward future JROTC activities.

On Jan. 5, members of the Whitesburg track team traveled to Louisville to participate in the Mason Dixon Games. Jimmy Stephens finished 2nd in the mile, Jeff Collier placed 4th in the two-mile and 5th in the 60-meter hurdles, Deanna Boggs ran the 800-yard dash and placed 3rd, finally Kim Fields ran the two-mile run finishing 3rd.

Governor John Y. Brown selected three WHS winners to represent the State of Kentucky in the upcoming Nationals. The team consists of 10 members of which the top three runners compete. Monick Wampler, the outstanding cross-country and track runner, was selected as one of the top three. Jimmy Stephens and Jeff Collier were selected as 1st and 2nd alternates.