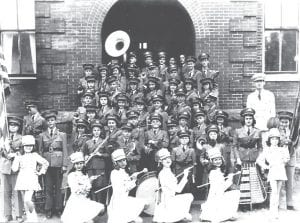 Mrs. Tolliver is presenting a new arrangement of voices in a Thanksgiving programs, when the Girls Glee Club, will be joined by the Boys Chorus, in songs of praises and thankfulness. This music will be interspersed with Bible readings and talks by the students. The date will be announced later.

The boys’ chorus made a big hit at the Hallowe’en Carnival in singing “Cindy.” The Glee Club appeared in lovely formals, at the King’s Court of the Hallowe’en Carnival, and entertained in their usual sweet way. They sang “Garden Coronation” and “Within a Dreamy Harbor.” The Glee Club will soon be dolled up in new blouses. They will have many public appearances during the coming months and are already making plans for the spring festival.

The Junior Chorus, composed of 60 boys and girls from the 7th and 8th grades, is sponsored by the Whitesburg Woman’s Club, before whom they sang in the October meeting. Their most popular number was “Katy-Did.”

Three cheers for Mr. Hugh Adams and his Blue and Gold Band, in their wonderful performance at the Fleming game. Sports: Yellowjackets upset by Hall High

A fighting underdog, Hall High 11, with the help of lucky breaks and knowledge of the rules, defeated the Jackets 13-7. The over-confident Yellowjackets were trailing 13-0 at the half. Hall, with the help of two 15- yard penalties, scored the first touchdown but failed to add the extra point. The Gamecocks kicked off and the ball went into the Yellow Jacket end zone where a Hall player fell on it for an easy touchdown. The Jackets scored in the third period and added the extra point. The Yellowjackets tried, but each drive near the goal line ended when Hall stiffened its defense.

The Yellowjackets rebounded from two successive defeats to down an improved Jenkins team 26-0. The game was much closer than the score indicated, but the Jackets decidedly had the upper hand from beginning to final whistle of the contest. Jenkins scored one touchdown, but had it called back because of an offside penalty. The score, at the half, was WHS 13-Jenkins 0. Jenkins threatened in the last quarter, but a high pass from center averted a sure touchdown. The Yellowjackets showed a strong offense with deadly blocking. The defense was not good, but was very strong when the Cavaliers threatened.

Linda Lou Franklin from the senior class, gowned in a gold satin formal carrying an arm bouquet of gold and lavender mums, and wearing the purple and ‘ermine’ train, carried by Larry Goodwin of the first grade, walked proudly down the aisle with Ralph Collins, junior class, who wore the King’s regalia, train bearer David Combs and were crowned by Prof. Millard Tolliver in appropriate ceremony, as Queen and King of the Hallowe’en Carnival of 1948.

Their attendants and runners-up in the great Class Contest, were Spicey Bates and Douglas Polly of the freshman class; Jean Ramsey and Bill Longmire of the sophomore class; Delores Holbrook, junior class, and Junior Bates, senior class.

The King and Queen ruled over their court and were entertained by the High School Girls’ Glee Club, directed by Mrs. Tolliver.

Preceding the evening, the huge crowd had the opportunity of all types of entertainment, including variety show, freak show and other booths. The Hallowe’en parade, at 10 a.m. though Main Street, led by the high school band, was the most colorful and comical of any parade of other years.

The Carnival is sponsored by the PTA for the school.

The annual County Fair was held at Whitesburg on Oct. 1. Rural and neighboring schools from all over the county were represented with some estimated 1000 visitors. The day was begun when the WHS Band led all schools in a grand parade through town. Following the parade the Girls’ Glee Club, the Boys’ Quartet, composed of Alex Hall, Gayle Fields, Sammy Prichard and Jesse Hogg; first place in piano contest for High Schools, Connie Combs; Janet Ison in the voice contest for grades; the Junior Chorus from the 7th and 8th grades; Barbara Lewis in the grade piano contest and Gene Giles in the trumpet solo.

Different groups from our schools entered races, dramatics, writing and poster contests. The Home Ec. department had a beautiful window arrangement in the Ammerman Garage window, taking many blue ribbons. The school buses ran to bring the students and take them home after the program.

The day was considered a huge success and all seemed to enjoy themselves. Everyone is looking forward to the fair again next year.

Lincoln Story. The boys and girls of WHS were privileged to see the life story of Abraham Lincoln on our motion picture screen. It was activity period, Tuesday, Oct. 5. The picture told of Lincoln’s rise from rail splitting to President. It was very interesting and I think that the students enjoyed it very much. We should all set the goals attained by Mr. Lincoln as our goals and strive to win them.

On Friday, Oct. 15, we were visited by Dr. Delgardo, evangelist from the First Baptist Church of Marion, Va., accompanied by Mr. Gardner, singer.

Dr. Delgardo brought an invaluable message to the students, and Mr. Gardner led us in song. The students should really do some thinking on what Dr. Delgardo said. We wish to thank Reverend Marion Parker as well as our principle, Mr. Tolliver, for bringing Dr. Delgardo to us.