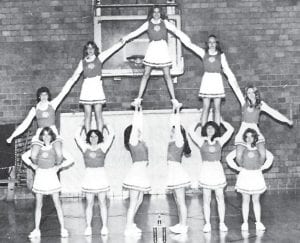 On Friday, Oct. 24, WHS celebrated its homecoming. A parade was held in the city at 1:30 p.m. and all Whitesburg area schools were dismissed for the event. At 6:30 p.m. the high school homecoming game festivities began. The ceremony opened with the presentation of float awards, which was followed by the coronation of the 1980 Queen. The entire Honor Court, including the Queen candidates and their escorts, assembled on the field for all of Whitesburg to see. 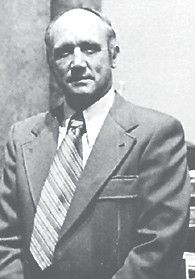 The last group to arrive on the field was the Queen candidates and escorts. Laura Adams was escorted by Tim Sexton. They were followed by Teresa Davis and her escort, Greg Hogg. Last came Janet Kincer, escorted by Bascil Boggs. Then arrived the moment which the whole school had been anxiously awaiting: the crowning of the 1980 Homecoming Queen. Teresa Davis was crowned queen and so the ceremony came to an end. 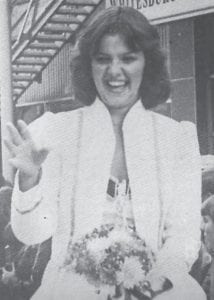 The theme of the 1980 Whitesburg Parade was “Patriotism,” and the streets were filled with red, white, and blue banners and floats.

The moment everyone at WHS had been waiting for finally arrived when winners of the High School Division were announced. Every class of WHS had entered a float. For awards this year, the winning class received a plaque to be displayed in the school trophy case. This year’s second place went to the freshman class, and the first place was awarded to the senior class.

The gym was specially decorated for the occasion. Most of the fans of the victorious Jackets came out to celebrate.

Several of the WHS band members made a trip to Middlesboro, on Oct. 6 to try out for the All Festival Band. Each person was judged on how well he or she could play the music. Four band members were honored by making the All Festival Band. Melinda Combs, Karen Maggard, and Betsy Adams, all on the clarinet, and Lisa Bentley on the flute were selected.

These girls will be making a three- day trip to Middlesboro during the week of Thanksgiving. They will present a concert on Wednesday, Nov. 26. The students and faculty of WHS are proud of these outstanding musicians.

The recipient of the 1981 Yellowjackets’ Distinguished Faculty Award is football Coach James Gose. As a coach, Mr. Gose guided the Jackets to district and regional competition. As an Alternative Education teacher, Mr. Gose teaches skills to develop strong bodies and stresses discipline to develop strong minds. As a person, Mr. Gose’s winning ways earns him a deserving place with the administrators, faculty, students, and community. Coach, teacher, friend, we dedicate the 1981 Yellowjacket to Coach James Gose.

The squads were judged on a number of cheers and a pom-pom routine. Whitesburg came out on top with a first-place trophy. Letcher ranked second.

The squad went on to Knott County Central to compete on March 14.

The 32nd Annual Mathematics Association of America test was given on Tuesday, March 10 at WHS.

Robert Gatton, a freshman, had the top score. In second place was Teresa Nichols, a senior. Kim Arthur and Kitty Gish tied for third place.